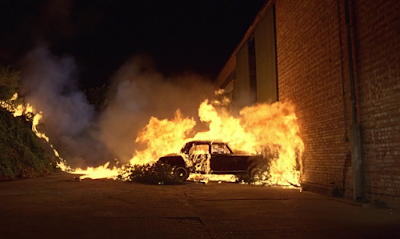 One of my formative film criticism experiences was getting a Time Out Film Guide for Christmas, it was the 2000 edition with Robert Mitchum on the cover. It wasn't my first A-Z capsule review book, but it was easily the most exhaustive. The print was tiny, better to cram everything in. Your Radio Times or Virgin film guides would stick to the basics, the bigger blockbusters or the awards films. They might dip their toe and review the odd genre stand-out, but nothing more than that.

The Time Out book reviewed absolutely everything. No film, no matter how obscure or cheap or foreign was excluded. As long as it played somewhere in New York at some point, there was a short bulletin weighing up its merits. The really exciting thing was that nothing seemed dismissed out of hand. Everything seemed to get a fair shake. Reviewers weren't put off by films with titles like Lightning Swords of Death. They knuckled down and had a think. So that's what I've always tried to do.

Email ThisBlogThis!Share to TwitterShare to FacebookShare to Pinterest
Labels: Films