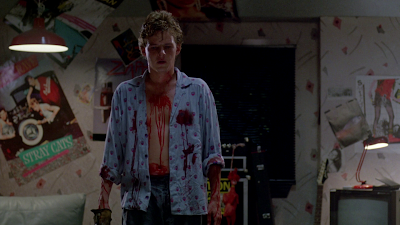 Jack Sholder's follow-up to A Nightmare on Elm Street largely dispenses with the idea that Freddy simply rules the dream realm. The disfigured child killer lingers like abuse, bubbling up in sensitive young men and using their confusion as his bridge into reality. It's five years after the first film, Jesse Walsh and his family have moved into Nancy Thompson's barred-up murder house. Freddy's memory persists like background radiation, turning the home into an oven and still powerful enough to detonate toasters and parakeets at will. Jesse cooks in his packed-up just-moved-in bedroom, unable to sleep lest he slip back onto Krueger's runaway school bus.

A Nightmare on Elm Street Part 2: Freddy's Revenge takes a different approach to the teen slasher, swapping out the attractive girl next door for Mark Patton's Jesse Walsh, a spaced-out wanderer trying to work out who he is and what he wants. Jesse isn't your typical horror male, he isn't confident or braggadocious, he's intense but vulnerable. The personal possessions he has pointedly little interest in unpacking play like a sports focused veneer, a cover he built for himself in his old life that he no longer has the energy to maintain. Disconnected from his overbearing, boorish father and his smile-at-all-costs mother, its Jesse's friendships that provide the greatest insight into who he is.

Jesse rolls around on the ground with school bully Grady, a mouth-breather who pulls down Jesse's sweatpants when the less chiselled boy stands to score himself some athletic achievement. That the two enjoy lunch and chit-chats together afterwards speaks to something flirty and unacknowledged between them. Grady even acts as a gatekeeper for Jesse, warning him about the gym teacher's leather daddy private life as well as his unprofessional desire for teenage pretty boys. Jesse keeps his closest female friend, little rich girl Lisa, at arms length despite her obvious romantic interest in him. When they do, finally, creep towards a physical relationship, Jesse acts out his idea of carnal desire before retreating, disgusted by the obscene, lubed-up changes to his body. Freddy prays on Jesse's sexual uncertainty, testing what the teenager is willing to consume, or be consumed by, with deliberately illogical scenarios that blur the line between dream and waking life within the film.
Posted by Chris Ready at 10:32:00