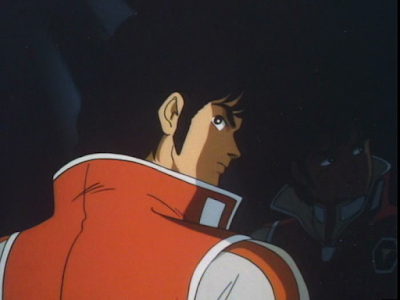 Intergalactic space travel recounted with the fist-pumping enthusiasm of a rock concert. Odin: Starlight Mutiny - a significantly shortened Central Park Media video release of a Japanese theatrical feature entitled Odin: Photon Sailer Starlight - mixes naval battles and mythic seafaring with a heavily commercialised vision of space travel. The central laser schooner, the Starlight, is introduced seconds before its maiden voyage with the kind of booming hard sell you'd expect to hear at an expo show. The youthful crew board the vessel at a hundred miles an hour, racing down winding, futuristic corridors to heavy metal music. Coloured spotlights blare and bleed, lending the casting off sequence, one usually depicted in solemn, ceremonial terms, the frazzled energy of a joyride.

Odin, even in this truncated form, struggles to maintain this youthful enthusiasm, quickly becoming emotionally distant and episodic. Detail, particularly that which might delineate the throbbing, hard-rocking mutineers, goes out the window. Odin then is a relentless push towards speculative material that would end up going unexplored. The heavy insinuation that Earth's Germanic peoples are descended from deposed, alien, adventurers was left dangling after a tepid run at the Japanese box office. Still, we're at least left with a scene in which a dying, Norse cyborg claws a crystal storage device out of his heart cavity with the instruction that its contents be used to ease his passing. The extraterrestrial computer immediately cues up a Planetarium laser show, complete with a pulsing synth score. Hacked to pieces to eschew accusations of tedium, what's left of Toshio Masuda, Takeshi Shirata and Eiichi Yamamoto's film is pure incident, animated with a pleasantly psychedelic sense of fluidity.
Posted by Chris Ready at 21:40:00