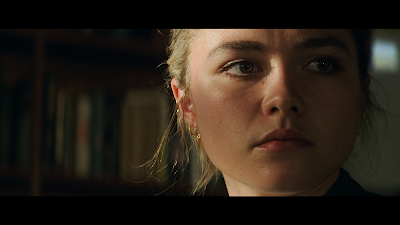 Cate Shortland's Black Widow provides a belated epitaph for Scarlett Johansson's Russian super spy, Natasha Romanoff, revealing her to be a former sleeper agent who resided in the American Midwest as a child back in the 1990s. Played by Ever Anderson (the daughter of actress Milla Jovovich and director Paul WS Anderson) in a flashback sequence that plays like an action focused adjunct to television's The Americans, a young Romanoff quickly discovers that the familial affection she has experienced is entirely dependent on orders issued from a higher authority. Demobbed in Cuba, Natasha and her younger sister Yelena (Violet McGraw as a child, then Florence Pugh as a wonderfully grumpy adult) are sweet-talked by their phoney super solider father, David Harbour's Alexei, long enough for soldiers to creep up and tranquilise the pair.
Black Widow then hurls us into a credits sequence that uses Natasha and Yelena as focal points in a montage that revolves around child trafficking. The film cuts back and forth between traumatised children - packed into shipping containers, holding onto their soft toys for dear life - and Ray Winstone's Dreykov, the architect of this outrage. Dreykov here is either instructing faceless militia men to point assault rifles at wailing youngsters or networking with the great and powerful. The insinuation is pretty clear, and underlined by the conspiratorial presence of a smiling President Bill Clinton. This Dreykov is, essentially, this four colour universe's equivalent of Jeffrey Epstein; a monster who abducts then indoctrinates young girls, placating them with drugs, before using them as an expendable commodity in geopolitical power plays. As an opening salvo for a comic book movie, the intentional invocation of a very real and far-reaching human horror seems a step beyond the usual fumbling self-seriousness.
Foregrounded in Black Widow is the consistent failure of fathers to either protect or nurture their children. Rescued by his daughters from a mountainous Russian supermax, Alexei reverts to treating Natasha and Yelena like accessories, neither awed nor grateful for their intervention. At this point, as with basically every Marvel film, Black Widow defaults to comedy to force the audience through scenes of grinding axis. It's funny that Alexei is so self-centred. It's amusing that his summation of the decades his daughters have spent brainwashed, visiting unconscious violence on the world, is one of pride. They have both killed so many people! This father who, not just willingly but greedily, played a part in their violent inculcation, is thereafter played as forgiven. This unthinking, amoral, slob is absolved in the eyes of the film because he is faintly pathetic - an overweight man forcing his uncooperative spread into the Soviet red Kevlar of his former super identity.
Black Widow's biggest disconnects come from obeying formula (or, maybe more accurately, expectation), ballooning the drama of a child ticking off the fathers who failed her into a yet-another finale set in and around a fracturing super structure. There's never even a moment when we're asked to consider the precarious nature of this cloud-scraping environment either. The tangible, emotional and physical, violence of two bickering sisters racing through Budapest streets pursued by an unyielding juggernaut (easily the film's best sequence) is long jettisoned. As the film goes on, we sink deeper and deeper into a server bank spectacle that manages only one moment of pure delirium - Romanoff and a pursuing cyborg surfing through the heavens on a collapsing solar wing. Obviously, Dreykov's eventual comeuppance also completely fails to meet the poisonous standard set by the film's opening crawl. Rather than be rewarded with the genuinely fantastical sight of Romanoff force-feeding Drekov his tablet of human misery, Black Widow elects to dispose of its bastard with, basically, a creaky computer generated scene transition.
Posted by Chris Ready at 16:04:00