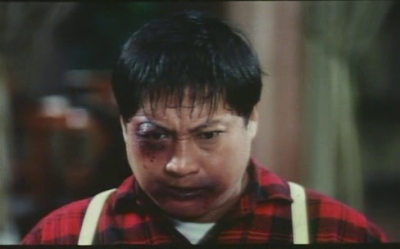 Sammo Hung's films, particularly those he directs himself, are notable for their wild tonal shifts. Hung consistently delivers pictures that scream back-and-forth between knockabout comedy and extreme peril, often within the same scene. Hung deploys these dangers to shock, to keep the audience involved and excited. Pedicab Driver then is the director's most assured dance yet, the film slowly evolving from a period fairy-tale about Macao's working class into a hot-blooded revenge film. Key to this transformation is John Shum's parasitic pimp - the actor deploying a truly loathsome performance that mixes broad, comedic tantrums with the casual application of unspeakable trauma.

Shum's Master 5 stands in stark, violent opposition to Pedicab Driver's romantic comedy elements. He drools and prods himself in the company of Nina Li Chi's wholesome baker Ping; he sends goons to violently break up a wedding. Worst of all, after having a father murdered just as his beloved gives birth, he condemns the screaming newborn to either a life in the brothel or a quick end in the river. His every action represents that which is low, cynical and revolting in life. He denies people their pride, profiting off their misery. So when 5 and Hung's Lo Tung meet, the actor-director's ferocious, full contact approach to martial arts absolutely sings. We don't want to see 5 put up a good fight, we want to see him get absolutely battered - his body pulverised by a flurry of punches. There's genuine delight in play watching 5's sweaty, shrieking face pirouette in a slow-motion close-up before his body collides with a plate of glass. It's cathartic. Hung understands how to give the audience what they want.
Posted by Chris Ready at 22:09:00 0 comments 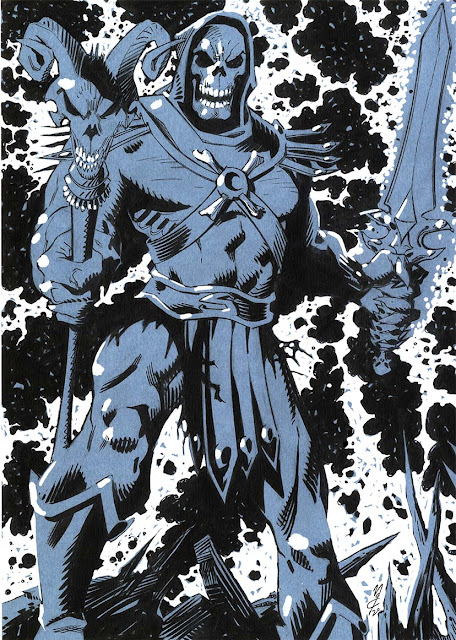 Email ThisBlogThis!Share to TwitterShare to FacebookShare to Pinterest
Labels: John McCrea, Masters of the Universe 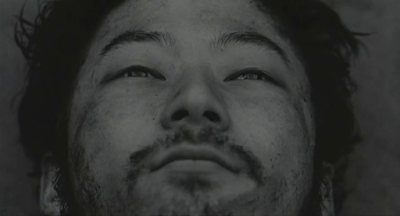 Gakuryuu Ishii's Electric Dragon 80.000 V riffs on origin stories and how they inform or clash with our notions of superheroics. Here life-changing brushes with the uncanny do not transform men into daring, messianic champions, instead they become dangerous aberrations. Both Tadanobu Asano's Dragon Eye Morrison and Masatoshi Nagase's Thunderbolt Buddha have absorbed unspeakable amounts of electricity as children, unlocking forgotten or suppressed corners of the human experience. After being struck by lightning while climbing a pylon, Morrison is put in touch with his inner reptile. The spiked-up punk now able to channel the snarling, frothing beast that the city and its society have long since papered over.

Thunderbolt Buddha is a little different. Unlike Morrison, his mains-based psychosis was apparently invited - in the film's closing moments we see glimpses of a beaming child sat atop a TV aerial-cum-lightning rod, begging to be hit. The two men have divergent approaches to their current lives too. While Morrison canvases the city, working as a private investigator for people who've misplaced their lizards, Buddha posts up on rooftops, dressed as a cable technician. He watches flamboyant criminals, plotting their demise from afar. This is the first of Electric Dragon's nods to Bruce Lee, specifically Lo Wei's 1972 film Fist of Fury. As well as this disguise routine, Morrison later summons up the hypnotic motion trails that put the zap on Robert Baker's Russian crime boss.

Ishii's film excites because, despite both men's commitment to civic justice, they can't help but collide. Buddha forces the issue of course, apparently unable to tolerate the existence of another electrically charged do-gooder. There's a sense of weariness at play in Buddha's actions, the taser-wielding vigilante seemingly bored with tracking then frying low-level hoodlums. Buddha's body malfunctions too, yanking him around a lair that looks very much like a power station control room. Perhaps he hopes to assign a successor? Ishii's film -  a breeze at 55 minutes - pulses with this curious, contradictory energy. Collaboration be damned, there's a real fight in the offing. When spirits run high, Electric Dragon's black and white screen shatters, consumed by the guttural cries of shonen anime guys and the raw, slashing calligraphy of Heta-uma manga.
Posted by Chris Ready at 23:41:00 0 comments

Transformers: Return to the City of Fear by Dan Reed 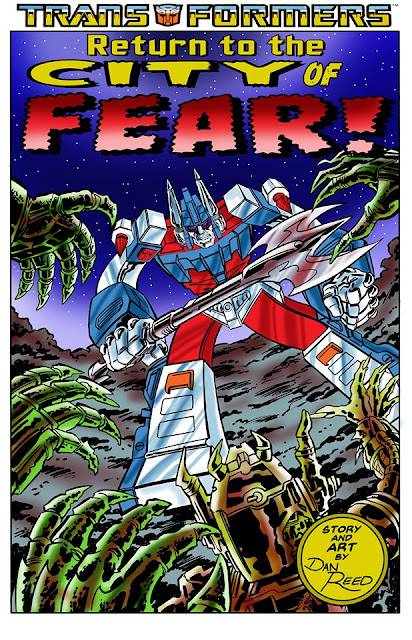 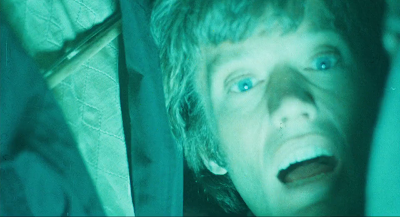 Peter Fonda plays Paul Groves, a successful but emotionally inert ad director experimenting with hallucinogenic drugs. Reeling from a run-in with his soon-to-be ex-wife - Susan Strasberg's Sally creeps onto set to very patiently remind her husband that he has to actually turn up to their divorce proceedings and make time for their child once in a while - Groves decides to take LSD as a way to gain insight into his personal and professional frustrations. Armed with several cameras, a box of poetry and Bruce Dern's John (a laid-back but still slightly sinister spirit guide), Groves journeys to a seaside squat to take acid. Groves is a bundle of neuroses, approaching his drop in transactional terms - a way to tap into something a little more artistic than the blaring TV noise he usually peddles.

For all its harassed editing and psychedelic imagery, Roger Corman's The Trip is as much about a man puzzling through his inability to maintain relationships with women. Groves craves this kind of insight but he is unable to recognise how his hang-ups influence or pollute his behaviour. He's too busy snooping out something he can sell. As soon as he swallows his pill he's instantly chatting about a violent drug bust, almost willing a swift intervention from all-knowing jackboots. John attempts to gently prod Groves down a path of gentle revelation but the ad-man sees suspicion everywhere. These phantom threats exerting themselves as the deposed, hooded ghouls from counterculture fav The Lord of the Rings or Satanic rites on smokey film sets. The one consistent thread throughout Groves' trip is Sally. Her presence surprisingly comforting, not at all the antagonistic bummer you might expect.

Although Groves attempts to distract himself away from the recollection with umpteen other smiling blondes, he can't help but fixate on a memory of himself and his wife having sex. The reminiscence is fuzzy, like a channel that can't quite be tuned in. Their bodies mix and merge under hot fluorescent lights - different faces bleed in before disappearing - the writhing blobs looking very much like the contents of a Mathmos lamp. This, it seems, is Groves' way into a deeper, more personal form of introspection. Unfortunately the ad-man resists, imagining a murder then fleeing into the night where he eventually meets Salli Sachse's Glenn. When Glenn and Groves have sex Corman ramps up the discomfort. The film thrashes wildly, introducing subliminal imagery and mocking music that jab at Groves' sense of self. The coupling may be exciting, even aspirational, but it leaves Groves none the wiser. Fonda's face remains unshattered in this only lightly altered Director's Cut. Instead we're left with the feeling that Groves, although still psychologically intact, has squandered a real opportunity.
Posted by Chris Ready at 21:54:00 0 comments

Mortal Kombat 11 - THE CREATOR FIRES ON THEM, IT IS MADNESS

Today's Inside Xbox event served up a quick look at Ebb Software's long gestating, bio-mechanical adventure game, Scorn. Presumed vapourware after an unsuccessful Kickstarter campaign in 2014, Scorn is now locked in as an exclusive for Microsoft's next-gen system. Originally conceived as a Myst-style prod game influenced by the surrealist artworks of HR Giger and Zdzislaw Beksinski, the Series X version of Scorn promises shooting mechanics and landscapes lifted straight out of Hans Ruedi's airbrushed art books.
Posted by Chris Ready at 23:05:00 0 comments

Das Mörtal - Next of Kin Showdown 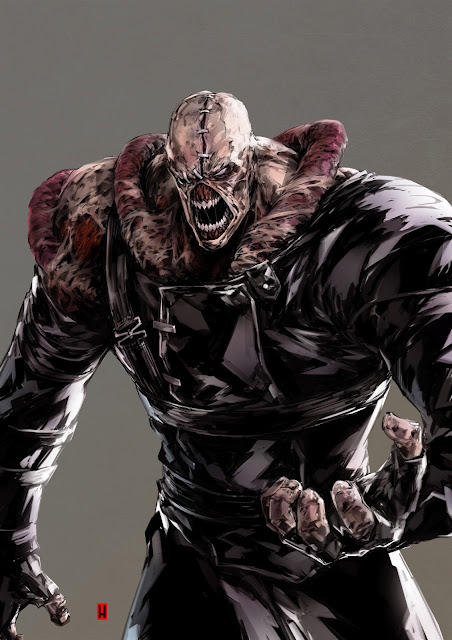 Guyver: Out of Control 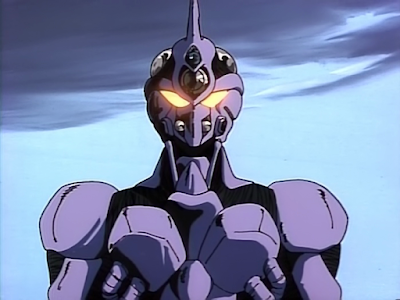 Although Yoshiki Takaya's original manga is no stranger to body-rending violence, Hiroshi Watanabe's Guyver: Out of Control ups the ante significantly, revelling in a pervasive sense of, not just, physical danger but a lascivious, creeping, disgust. This revulsion isn't expressed simply in terms of Out of Control's violence (although an early confrontation is characterised by straining musculature and the fragility of exposed, snapping, bones), it extends out into the feature, infecting and underlining everything from the behaviour of minor players to how the central bio-booster armour interfaces with its host.

Out of Control's story concerns Sho Fukamachi, a lovesick teenager who inadvertently becomes the human battery for an alien battle suit. Watanabe's OVA trims and reorganises Takaya's story, rolling characters together or changing the gender of major players. Fukamachi's best friend Tetsuro is eliminated altogether, pushing Sho and Mizuki, the object of his affections, closer together. This uneasy proximity lends an underlying note of acute sexual anxiety to scenes in which Sho's body is physical trapped, then violated, by the larval stage of the Guyver. It's not just the interruption of a potentially delicate romantic moment, it's a humiliation - one quickly followed by an engorged retribution as Sho uses his new, powered-up body to tear aggro monsters limb from limb.

Out of Control's most notorious embellishment concerns the second, antagonist Guyver. Rather than the manga's Aryan muscle-man we have Valcuria, a red-headed fitness fanatic. Adulthood in Out of Control is already positioned as its own kind of mutation - a change that activates all kinds of unspoken conspiracy and alarming physical corruptions. Men swell into oversized, sweating ogres who delight in their ability to physically intimidate women and children. Valcuria, our one example of mature femininity, is presented as soft and curvy; a confident, intimidating counterpoint to the shy, respectable Mizuki. While Sho's first transformation has its own, uncomfortable, sexual dimension, Valcuria's is a full-blown rape - one that the filmmakers pore over with sweeping, soft-focus camera movements and a pulsing slow-motion detail that wouldn't look out of place in Hideki Takayam's Urotsukidoji: Legend of the Overfiend.
Posted by Chris Ready at 00:40:00 0 comments