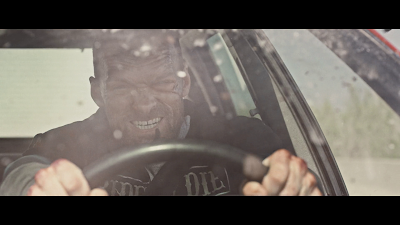 Guillaume Pierret's Lost Bullet is an understated and efficient action film driven by a morose lead trapped by, and rallying against, his diminished station. Alban Lenoir's Lino is a former ram-raider recruited out of prison by Ramzy Bedia's Charas, a debonair police officer who leads an elite motorway interception unit. Lino's mechanical skills - such that he is able to transform a Renault Clio into a concrete crumbling battering ram - are highly prized by the older man. Unlike the other officers, who regard Lino with a mixture of suspicion and disgust, Charas engages with the man on a personal level, bickering about vintage cars then bending the rules to reward his hardworking charge.
Their relationship - certainly from the perspective of Lino - resembles that of a knight and his squire, one man with a secure, even special, social standing reaching out to knowingly elevate someone less fortunate. As the film goes on it becomes clear that Lino is not simply battling his heart out to keep his own head above water, he's fighting out of duty - an attempt to repay the debt he feels is owed to Charas. This note of chivalry reverberates throughout Lost Bullet, underscoring scenes of Lino butting heads and hammering through an assortment of flawed or outright amoral police officers. Lenoir, as a bruised up and bleeding ex-con in shabby hand-me-down clothes, is positioned as Lost Bullet's moral authority, the answer to the preening, letter jacket wearing, corruption of Nicolas Duvauchelle's Areski.
Posted by Chris Ready at 23:01:00 0 comments 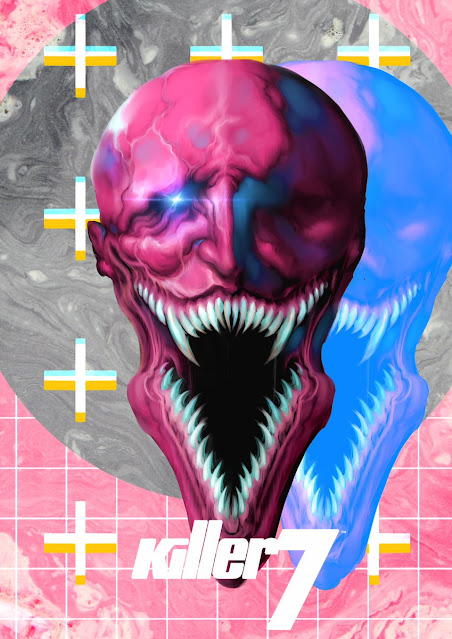 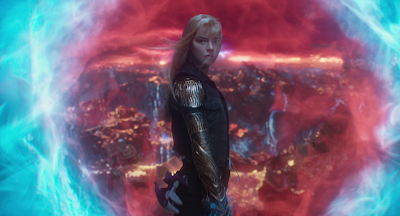 Conceived and shot during the Fox era but actually released (following a long delay) after Disney's consumption of Rupert Murdoch's former film production company, The New Mutants finds itself occupying a distinct. post-Bryan Singer, space. Rather than function as a grand summation of a now obsolete phase of action cinema, director Josh Boone's film, co-written with Knate Lee, is a dialled-back literalisation of some of the more obvious, but underexplored, themes that pulsed through Singer and Simon Kinberg's entries. To wit: a same-sex relationship is finally allowed to flourish while the figurative, psychically manifested, prisons of Professor X - erected to restrain or outright chain the explosive powers of his young charges - are rendered here as an actual, physical, dungeon. New Mutants revolves around a mouldering psychiatric unit speckled with computerised locks and futuristic surveillance, a depressive billet for these adolescent, would-be, heroes.
Structurally, the film has plenty in common with A Nightmare on Elm Street 3: Dream Warriors; New Mutants offering up a similar gang of misfits, each with their own traumatic past. Chuck Russell's film used these, often only perceived, failings to power bravura special effects sequences of Fred Krueger tormenting then killing his teenagers. Boone's film takes a more positive but ultimately flatter tact, offering up physical manifestations of half-remembered abuse to be fought then vanquished. It's a slasher conundrum executed with triumphant, computer generated colour that, actually, ends up underlining why pick 'em off films work so well - they systematically narrow the audience's focus. Bystanders are chopped up and diced until we're left with a super-character who can surmount the carnage. Here the also-rans are repurposed, becoming love interests or reluctant powerhouses, but always stealing screentime away from the real stars: an out-of-control mutant who, unfortunately, fails to tip over into complete mania and Anya Taylor-Joy's magikally powered mean girl.
Posted by Chris Ready at 17:25:00 0 comments

Runamuck and Runabout by Rui Onishi 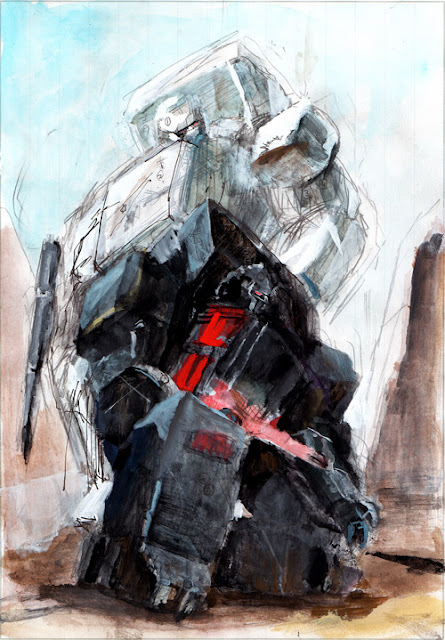 Email ThisBlogThis!Share to TwitterShare to FacebookShare to Pinterest
Labels: HER, music 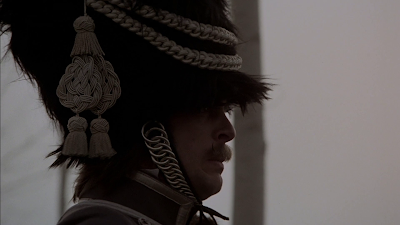 Keith Carradine and Harvey Keitel play Armand d'Hubert and Gabriel Feraud, a pair of French cavalryman during Napoleon's conquest of Europe who spend the best part of two decades in a state of perpetual quarrel. The Duellists, Ridley Scott's feature debut, is brisk and beautiful, a film utterly disinterested in the storied military careers both men clearly lead. Their ascension through Bonaparte's ranks mere circumstance, often contextualised as nothing more than a courtly wrinkle that prohibits their game. Scott's film, working from a screenplay by Gerald Vaughan-Hughes, is instead built around hot spots - the moments when the two men have the opportunity to either encircle each other or outright collide.

Over the years the dispute grows and distorts in both men's minds. d'Hubert, the more fretful and temperate of the two, cannot help but develop a strange sort of camaraderie for his fiery opponent, a respect that, sadly and quite apparently, is never reciprocated. For Feraud, the fanatic, the original ignition point - d'Hubert interrupting the party of a beautiful socialite to inform Gabriel that he is to turn himself in after skewering the mayor of Strasbourg's nephew - mutates over the years. Speaking to a group of lackeys before the pair's final duel, Feraud's grasp on the original tension point has grown from an acute, ego-prickling embarrassment into a thundering, manufactured, outrage regarding d'Hubert's failure to properly honour France's (by now deposed) emperor.

Feraud is a scrapper, aggressive and impatient. The first duel we see him fight (against the aforementioned nephew) represents this wild man in complete control, his movement, or lack thereof, dictating the film's visual grammar. At rest, Scott and Cinematographer Frank Tidy photograph Kietel as a figure - one of many - in smokey, Romantic landscapes. When battle is joined, the film becomes energetic and hand-held, the camera positioned closer so we can see feel the irritation radiating off Feraud. Kietel plays a peculiar sort of neutrality in this scene too. He isn't happy that he's prevailed so decisively in this life-threatening situation, he's frustrated that success was achieved, not through his own skill with a rapier, but because of his adversary's sloppiness and incompetence. He wanted a challenge and didn't get it.

Each of the film's duels follow this template, fight choreographer William Hobbs conferring a distinct structure and identity on each of the altercations. Hobbs posits conflict as a dramatic proposition both synchronised with, and commenting upon, the combatants' physical and emotional distress. Scott and Tidy collaborate, photographing their duellists in such a way that the audience is never allowed to simply sit back and feel the distance between themselves and the film's subjects. We marinate in their anxiety. Again and again Carradine and Kietel are arranged in ways that amplify our connection with them. A mid-film battle, in an airless stone cellar, evokes a bloodied sense of exhaustion. Both men flail about - already injured - crashing into each other with their heavy swords. Onlookers flinch, scrambling out of their way; the sabres striking sparks as they paw at the room's confines - violent but ultimately inconclusive.

The Duellists oozes confidence, Scott's film constructed around opportunities for tension and, eventually, release. A sense of historic chronicle is evoked, not through length or dramatic complication but through the film's mise en scene - the wax and wane of female contact or the ways in which an individual is arranged in massive, bucolic landscapes. Although not singular in its look - Stanley Kubrick and John Alcott had already photographed Barry Lyndon absent of any electrical light - Scott's film finds beauty in the choke of proximity. Verisimilitude deployed as shorthand, suggested through cluttered, smokey frames or even just complicated uniforms. That such a contradictory visual choice exists implies an intent that we may not understand but, nevertheless, instinctively feel. Frequently our noble Hussars are lost in rotting, impoverished environments, their perfectly tweaked moustaches and braided cadenettes instantly recognisable as notes of beautification or ego, battling against the wave of frigid hostility that envelops them.
Posted by Chris Ready at 18:37:00 1 comments

Now that the Demon's Souls remake is out in America, we can get a look at some of the visual options that Bluepoint have made available. As with their work on the PS4 version of Shadow of the Colossus, the studio have included filters that offset their massive graphical overhaul. The Classic option, demonstrated above, goes some way to aping the depressed, mouldering, greens seen in From Software's PS3 original.
Posted by Chris Ready at 12:43:00 0 comments

Aliens vs Predator by Mike Mignola and Dyemooch 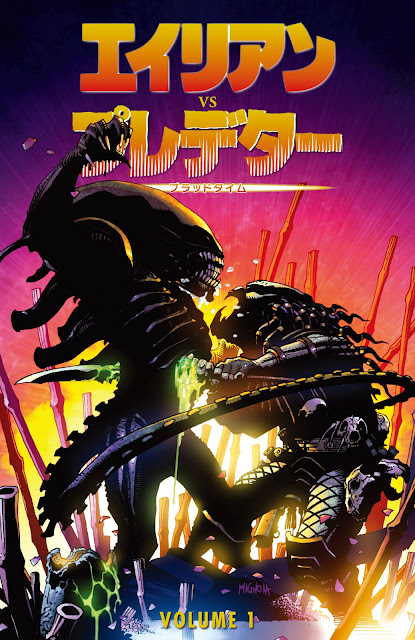 Digital Foundry's John Linneman's chats with Marco Thrush and Peter Dalton from Bluepoint, as well as SIE Worldwide Studio's Gavin Moore, about their imminent PS5 remake of Demon's Souls. As expected from the development team that wrung the Xbox 360 dry to get the first Titanfall running at a solid refresh rate, the Bluepoint guys - in a pretty unguarded moment for a PR push - state a preference for their rock-solid Performance Mode. The clang is so loud that Moore quickly chimes in to talk up the game's less refreshed (and likely closer to the stuttering PS3 original) Cinematic Mode. New footage of the game is brief, centred around a Penetrator battle that signals a few key aesthetic changes, both good and bad. The boss itself now appears closer to the deep-fried damnation you'd expect from key Dark Souls characters while the Fat Official has been downgraded from an abyssal Beefeater to your standard pustulous oaf.
Posted by Chris Ready at 10:21:00 0 comments

HPSHAWTY - If I Get Away 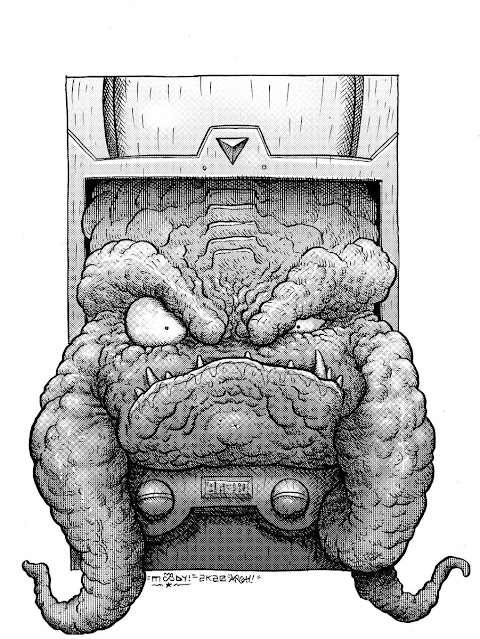 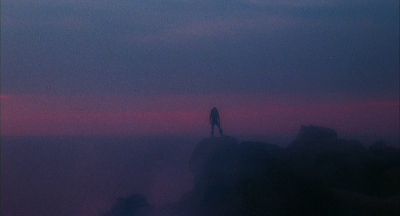 Shot to express a swirling veil of shimmering data, Lucio Fulci's Conquest presents the sword and sorcery epic as formless and unknowably mystical - a series of brutal exchanges focused around the transient magics of bodily destruction. Fulci and cinematographer Alejandro Ulloa use double-exposures, smoke packed frames, and even shots aimed directly into the sun, to describe a prehistoric realm ruled by a golden witch and her army of doped-up werewolves. Our heroes are Andrea Occhipinti's athletic bowman Ilias, a trespasser from Greek folklore and Jorge Rivero's Mace, a brawny caveman armed with stone nunchaku.
Each of these champions has been pulled from completely different swashbuckling sub-genres - two mysterious strangers with faint, Godly aspects. Ilias is the kind of blandly handsome, anointed adventurer that Ray Harryhausen films were often built around while Mace, for all his martial arts prowess, is less Conan the Barbarian and more a Cro-Magnon Cain. This marked wanderer is distinct and damned, wilfully separated from the rutting, pre-verbal peoples of this fog-choked land. Ilias and Mace are united in their understanding of, and interest in, technology. Both men wielding weapons massively out of step with their Stone Age surroundings. Mace's karate flail is confusing and compact while Ilias' bow, even before it receives its laser targeted upgrade, is like something from a completely different millennia.
Mythic milieu established, Fulci's contribution to the language of pulp adventure centres around dismemberment - both casual and ceremonial. The director laces Conquest's heatstroke dreaminess with jolts of sudden, outrageous, bodily trauma. Sabrina Siani's constant nudity aside, Conquest frequently proceeds with the kind of numbed passivity associated with children's films. None of the characters - good or evil - operate with any great depth, each one-dimensional archetypes battering towards a light-show conclusion. Fulci's twist then is that Conquest dwells on, if not revels in, the minutiae of injury. Helpless women are pulled limb from limb, their warm guts spilling out onto their former grottos; allies are not simply dispatched, their heads are either caved in or spirited away, to power black magic rituals. A third-act funeral pyre - that heroic fantasy stand-by - is shot by Fulci to stress the second-by-second consumption of a human body. Fire licks at dribbling skin while plump, oozing, meat is cooked to ash.
Posted by Chris Ready at 23:02:00 0 comments

Gorillaz - The Valley of the Pagans ft. Beck

A ten minute look at Vergil's path through Devil May Cry 5 Special Edition's Legendary Dark Knight mode, a recurring fixture for series re-releases in which enemy counts go through the roof. Already an extremely good looking game (not just technically but aesthetically), the power of PS5 looks to have been put to use generating bodies to strike, and herd attacks to track.
Posted by Chris Ready at 22:21:00 0 comments 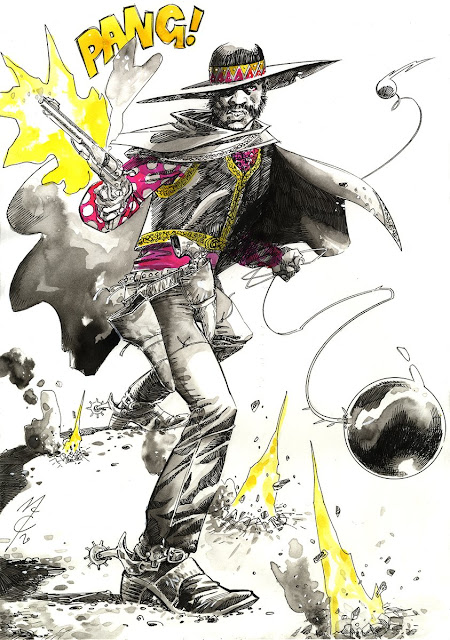