Friday the 13th: The Final Chapter 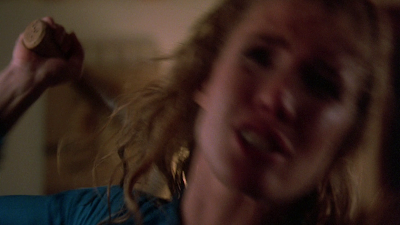 Friday the 13th: The Final Chapter comes on strong by pitching itself as a summation of the previous films, an instalment confident enough to chart its own path to a conclusion. For the first time in the series we get to see the authorities reacting to Jason as an ongoing concern instead of just showing up late to dreamily sift through his wreckage. Final Chapter proposes an idea of scale. There's a hospital, adults with jobs who can provide a perspective outside the knickers and knives bubble. It begs the question, will we finally get to see Jason unleashed? Of course not. Despite the tease, Final Chapter quickly reverts back to the shapeless meandering that has defined the franchise.

Jason slowly and methodically terrorises a herd of witless teenagers too stupored to gang up and retaliate. Given that barely anyone survives these episodes, not to mention that the intended audience has long since latched onto Jason as the only constant, the filmmakers have ceased trying to make anybody pointedly likeable. The teenagers behave as crude archetypes, self-absorbed wastrels who track naturally, and rapidly, from sex to death. Too shallow to truly identify with. For the most part the film asks the audience to simply drift around in the space surrounding these murders, omnipresent observers lucky enough to catch (most of) the feature slayings.

There's one significant blip. Upon returning home to her powerless cabin, Joan Freeman's Mrs. Jarvis peers cautiously up her stairs, catching sight of a window lashed by rain. The shot stands out because the film has briefly asked us to assume the perspective of prey. Mrs Jarvis isn't a strung out teenager though, she's a middle-aged divorcee with two children who runs her house like a boot camp. Has Jason finally met his match? A good, wholesome all-American materfamilias who can stand in opposition to the whispers of Jason's own, unhinged mother? Again the answer is no. Don't delude yourself. This isn't a work that examines familial abuse and the insidious legacies they inspire, director Joseph Zito is much more interested in muscle men hurling attractive women through first floor windows.
Posted by Chris Ready at 18:07:00