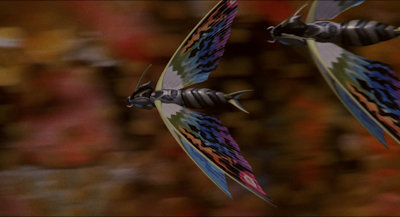 A Summer holiday snoozer that barely gets going, Rebirth of Mothra II dispenses with any kind of adult framing to congeal in the company of children. Not that there's anything wrong with pushing kids upfront to do the dramatic lifting, umpteen Amblin efforts demonstrated that a younger perspective does not have to mean shallow or simple-minded. Rebirth II's problem is that none of its characters seem to have any interior drives or motivations. They don't strive for goals or reflect, they're not even particularly naughty. Instead they're simply a throng of brightly dressed visual markers tasked with carrying a piece of fluffy merchandise around the spacious, technologically advanced sand castle that has sprung up off the shores of Nagasaki.

Mothra's son, Mothra Leo, doesn't fare much better either. Rebirth II punts the character out of the usual cycle-of-life arc, making him a permanent, heroic fixture. This lack of tragic machination leaves the lepidopteran with little to do other than soak up death-ray punishment from Dagahra, an amphibious dragon choking Japan's waters with inflamed, caustic Starfish. Stepping behind the camera, Rebirth II is the last big screen work by the late special effects director Koichi Kawakita. Sadly it isn't his best, largely repeating the same kind of blasting inactivity that marred his contribution to Godzilla vs Mechagodzilla II and Godzilla vs SpaceGodzilla. It's a shame, especially since the first Rebirth film seemed to be a return to thrashing form. Perhaps the problem is Mothra himself, extended exposure reveals that there aren't a great deal of interesting ways to shoot the hovering insect. Like his mother, Mothra Leo is essentially just a massive, brilliantly coloured kite.
Posted by Chris Ready at 11:11:00