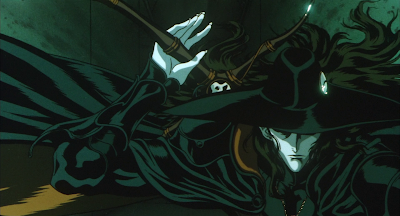 Although no date is specified, it's clear that Yoshiaki Kawajiri's Vampire Hunter D: Bloodlust takes place a significant amount of time after its predecessor. Whatever power the vampire aristocracy held over humanity has waned to such a degree that the creatures of the night now huddle in their own ghettos for safety. While Toyoo Ashida's film used the bloodsucker mythos to punch up a feudal kidnapping spree, Kawajiri's take on the material digs deeper, embracing the forlorn, romantic aspects of characters who, by their very nature, cannot help but stand apart from the mortals who make an impression on them.

In Bloodlust the titular bounty hunter is contracted to return the daughter of an elderly, dying millionaire. Charlotte, the young woman in question, appears to have been taken by a vampire named Baron Meier Link. Charlotte's father and brother presume an abduction but the truth is more complicated. Charlotte and the Baron, an unusually gentle ghoul, are a couple. Although she pushes him to turn her, the Baron refuses, unwilling to curse the woman he loves. In Ashida's film the monsters were nobility, all-powerful lords who ruled radioactive ruins. In Kawajiri's, the threat has been banished to such a degree that humans now hold fortunes and wield far-reaching powers of life and death.

Vampirism is treated like a disease in Bloodlust, something that needs to be rubbed out. Indeed, Charlotte's father instructs D to murder his daughter if she has succumbed to the temptation of eternal life. Kawajiri marks this shift between films through an aesthetic reevaluation that favours emptiness and desolation rather than, simply, wreckage. Bloodlust explodes its predecessor, tracking design elements to their absurd, beautiful conclusions. D's voluminous, spaghetti western styling is cast aside in favour of a pulp swashbuckler rendered as an insect. His skin is marble. His clothes are closer to armour; a carapace that gleams like a beetle's elytra. His sword is long and thin, curling like a talon. D is supernatural in appearance now, not just deed.

Architecturally we're deeper into a blown-out future - wastelands and modernisme that has slowly, and definitively, returned to nature. Ashida's blend of organic exteriors and mechanical interiors coalesces here into incredible edifices that, finally, resemble a Star City designed by Antoni Gaudi. Carmilla's neo-Gothic castle, the space where our story concludes, is a towering, wrought iron exaltation that contains a cathedral spire able to take to the heavens. The fortress is a place of worship interpreted as unchecked, cancerous growth - a religious structure that has sub-divided and multiplied completely out of control. This impossible series of towers and bridges is explicitly held together by a banished, vengeful spirit who desperately clings to what little life remains to her. Even in death, Bloodlust's vampires suffer.
Posted by Chris Ready at 17:53:00