Julian Casablancas - I Wish It Was Christmas Today

It's Christmas! Lots of kids got age inappropriate video games, and are now fumbling about playing online! What better way to welcome them to the gaming fold than to kill them over, and over again on Call of Duty: Black Ops? Merry Christmas ass butts!
Posted by Chris Ready at 17:18:00 0 comments 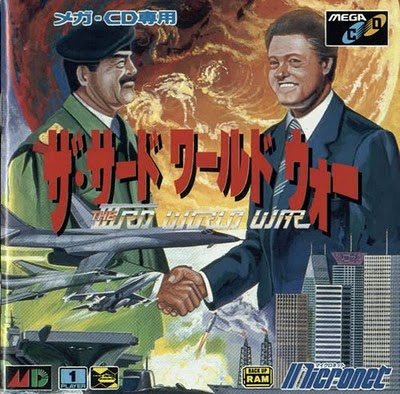 The rather magnificent Japanese release cover for Extreme's modern day Risk clone, Third World War on Mega CD. Is it me, or is Clinton channelling Nixon? I don't remember Bill being quite so jowly. In comparison, the west got some throw-up text and a few generic, floating military heads. Ho-hum.
Posted by Chris Ready at 16:17:00 0 comments

Captain Beefheart & His Magic Band - Sure 'Nuff 'n Yes I Do

Email ThisBlogThis!Share to TwitterShare to FacebookShare to Pinterest
Labels: Captain Beefheart and His Magic Band, music

Another quicky Black Ops capture. It's strange being able to reassess your gameplay after the fact. In game, even the faintest success can often feel like skillful table turning; cue it up in theatre mode and most of the time you view a stuttering mess of competing latency. The thirty second limit poses a problem too, it gives little wriggle room for a lead-in set-up, leaving you with airless punchlines. Still there's the odd snatch that makes you smile, embedded above is a demonstration of the lengths you sometimes have to go to to get that shotgun kill. Below, find a sneaky solution to emptying your FAMAS - creep up behind foes with Scavenger and stab them! Sometimes you even get enough breathing room to actually reload.

Lost to the ages is one solid minute of me panic knifing my way through a Wager Watch. I wish I'd saved that.
Posted by Chris Ready at 15:57:00 0 comments 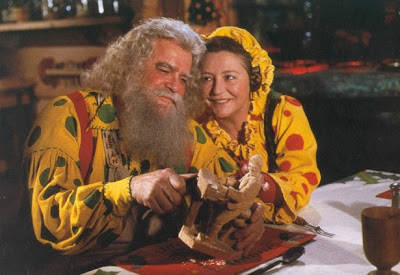 Masterminded by Superman producer Ilya Salkind, Santa Claus: The Movie is the flip side to Richard Donner's franchise kicker Superman: The Movie. Both address prime Americana properties, reworking - you might say panel beating - them into hero quest film features. With The Man of Steel, Donner and screenwriter Tom Mankiewicz gently crafted a film about an alien's dissociation with his adoptive planet, lacing in an arc that dealt with the pressures of trying to please two fathers. Jeannot Szwarc's Christmas fable, from a screenplay by Superman alumni David and Leslie Newman, is instead a clod. A half-hearted tale of ancient unknowable mysticism, and pseudo-religious prophecy, as foundation for the idea of Father Christmas.

This Claus isn't simply a jolly old soul with a limitless generosity of spirit. He is instead an anointed one, who transcends death to toil for eternity in the company of a magical tribe of little people. He's barely even the film's focus; once Claus is established, attention rapidly shifts to Dudley Moore's Patch, a simpleton elf who dreams of industrialising Santa's work shop. When his production line starts cranking out half-finished toys, Patch steals some levitation dust and travels to New York to work for John Lithgow's BZ, a Commie hating toy maker who peddles death traps. Although Patch is quite clearly a bit of a shit, Santa Claus: The Movie can never be bothered to acknowledge it. His self-centred need for attention is played as if it is charming. We endure endless scenes of witless capering that do not entertain, his idiocy nothing more meaningful than a mechanism to allow for the next inane development. And so it goes - children enjoy deadly inappropriate courting scenes, and Patch's skill makes an entire work force redundant just in time for Christmas. The film concludes with a North Pole hoedown and BZ drifting off into space to die. Har har! Santa Claus: The Movie is best regarded as a curio in which everybody's best-ish efforts combined to create a mutant thing geared for holiday season repeats, whilst accidentally being a fair illustration of the perils of rampant capitalism.
Posted by Chris Ready at 00:57:00 0 comments

America's finest moment recalibrated to tease! Watch as Neil Armstrong's Moon walk is faithfully recreated to drum up interest for the next installment in the exceptionally vulgar Transformers franchise! Twenty minutes to pick through the remains of a hulking techno-morpher space freighter? NASA are hard taskmasters. Although this shill does at least seem to want to suggest there will be some sort of story for this episode - is that an ancient Autobot at the end? It rather makes you wish Michael Bay would just use his unrestricted American aeronautics access to make a really swish flick about the actual space program. Say what you will about Armageddon, but any scene set in or around NASA tended to be cool cool beans.
Posted by Chris Ready at 18:20:00 0 comments

I've heard Daft Punk's Tron suite compared to the early electronic percussive output of John Carpenter, but for me this track is Street Hawk Tangerine Dream vs 1984 Brad Fiedel.
Posted by Chris Ready at 15:51:00 0 comments