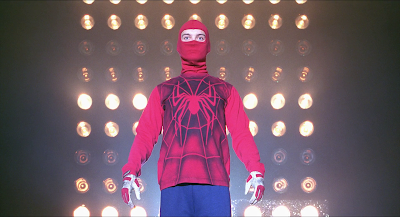 At the time of Spider-Man's cinema release there was a sense that this was a lesser Sam Raimi film, that the director of The Evil Dead was holding back on the camera tricks and stylistic flourishes he'd made his name with so as not to overload Sony's super-marketable super-story. While this franchise launcher may not be as bombastic as Raimi's earlier work, it's still breathlessly energetic and no less excited about pummelling its lead character. In Tobey Maguire, Raimi has found an actor capable of communicating an earnestness that, while it doesn't track into the all-conquering power fantasy at the centre of similar tales, is capable of providing their hero with a basic, indefatigable, working class decency.

Financial stability is something that Maguire's Peter Parker has to reach for - the teenager's elderly Aunt and Uncle are struggling to keep a roof over their family's head. Cliff Robertson's Uncle Ben is out of work and finding it hard to adjust, meaning Peter's difficulties are often expressed in economic terms. The Parkers are not dirt poor, but their future isn't certain. They have to be careful. This frugality has a knock-on effect for Peter, meaning he stands out at school - chided and despised for not fitting in with the frosted tip bullies who stamp around in their cavernous polo shirts. Parker hasn't got a car to impress the girls either. He's trapped in his bedroom, scheming ways to equalise his situation; dreaming of, essentially, growing up. Bitten by a genetically spliced spider on a school trip, Parker comes home and strips, revealing a pale, weedy body before blanking out.

The transformation in Raimi's Spider-Man is pointedly biological, a turbo-charged puberty. Overnight Parker's body becomes tanned and lean, his eyesight improves and he's more able to stand up straight. Parker is momentarily allowed to feel good about himself. This aspirational reconfiguration isn't perfect though, at first it's just an enormous pustule on his hand where the spider clamped down, eventually its spinnerets in his wrist that look like crisscrossing scar tissue. Later Spider-Man film adaptations honour Steve Ditko and Stan Lee's source material, making the character's web-slingers a mechanical device dreamt up by Parker between classes. Here they're orifices that have grown out his flesh, a note from an earlier, unrealised James Cameron project that not only explains away a teenager producing still-futuristic technology but underlines the secret metamorphosis Parker is experiencing.

The brilliant thing about this Spider-Man then is that this isn't a story that tends towards bitterness or dreary introspection, rather it's about a young man puzzling out what kind of person he wants to be and how that desire, rather than material wealth or influence, is what ends up winning over the woman he loves. The superpowers do help but, really, the biggest boon they offer is a stable physical and psychological framework for Parker's identity to grow into. Uncle Ben's great power speech isn't experienced as an abstract over decades of average Joe life, it's a mantra steering Spider-Man's sense of civic duty. This is the long-term price Parker pays, he cannot turn away from the responsibility his altered state has enabled him to embrace. Raimi undercuts this ceaseless altruism with an idea straight out of his Necronomicon work - the hero as an assiduous doll to be thrown at (or through) every available brick wall.

Parker's physical suffering is scaled up with his increased endurance. Grenades explode directly into his face and flying buzz saws score tracks up and down his arms. Raimi isn't interested in superpowers as a path to invulnerability though, the director is much more excited about pushing the limits of bodily harm within a Summer movie setting. Confrontations with Willem Dafoe's cackling, never-not-entertaining Green Goblin absolutely crackle, particularly the final dust-up. Editors Bob Murawski and Arthur Coburn portray Goblin as a series of incoming knees, the impacts to Parker's face drawn out with slow-motion photography and slobbering expulsions. Peter's face bleeds and swells; collapsing onto bricks provoking tiny, defeated yelps rather than the impatient grunts of a rabid action man. Raimi is relentless, never allowing the audience to think of Parker in conceptual, invincible terms. Again and again Parker is presented as a teenager, out of his depth, struggling to come to terms with his new form. Raimi using unrelenting punishment as an empathy prompt.
Posted by Chris Ready at 20:34:00