The Salute of the Jugger 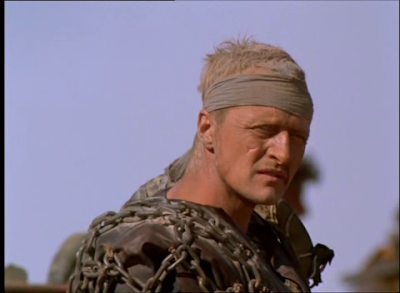 Considering the totality of the film's post-apocalyptic framing, the stakes in writer-director David Webb Peoples' The Salute of the Jugger (released in the United States as The Blood of Heroes) are surprisingly small scale, even interpersonal. The plot centres around a group of wandering athletes who travel along dust bowl trade routes playing a sport called simply The Game. Since civilisation has been completely buried by bombs and an endless desert, these Juggers, as they are called, are the only distraction from a life spent sifting rubble or hacking away at irradiated crops.

The Game is played by two teams of armoured players, competing to take possession of a dressed-up dog skull. Rather than have the contenders spread out to meet in various configurations, each person must attack their opposite on the other team and defeat them before mixing in to help their cohorts. Although The Game is violent - one player's sole role is to walk around spinning an enormous chain flail above their head, hoping to catch someone's face or fingers - it is not sadistic. Ears may be bitten off during play but the athletes embrace and laugh when the competition ends. Personal preservation is not a driving force in this world, the future is not a concern, there is only now.

The Game has a religious aspect to it - Juggers seem genuinely honoured to bleed for the amusement of the shell-shocked masses. The audience is appreciative, offering up their meagre trinkets to catch a glimpse of play. These primitive societies reward these athletes too, feeding them up, getting them drunk then allowing the Juggers their pick from the village's fresh-faced groupies. Sex, as with all human interaction in this world, is not about love or shame. It's either purely transactional or a brief opportunity to experience unity with another person before feelings have to be filed away somewhere distant. In such a relentlessly bleak (not to mention mind-numbing) milieu, romance is much more abstract, born out of vaulting, personal action rather than tender interaction.

Rutger Hauer plays Sallow, an expert old hand forced to slum it in the wasteland. There is, we find out, a more centralised, professional strain of The Game but Sallow has been banished from it. His transgression as much about distinct, immutable class divides as it was specifically about having an affair with some bloated, self-appointed lord's wife. Joan Chen's Kidda is the young prospect, the acrobatic seeker who directly pursues the prize animal bones while her teammates knock lumps out of the competition. Peoples and cinematographer David Eggby use their actor's faces to chart their progress within a sport that seems only to take - Sallow loses an eye while Kidda begins the film chiselled and youthful, ending it covered in scar material accented with the swell of blunt trauma.

If the detailing hadn't already made it clear, The Salute of the Jugger is not an aspirational future-sport movie. Victory here is bittersweet rather than all-encompassing. Sallow and his team aren't putting their bodies on the line for an assured, affluent future for themselves, they're doing it on the off-chance that just one of their number might make it into a higher, more protected strata of their game. This idea is either subtext or explicit text depending on which version of the film you are viewing. The American release trails off after Sallow and Kidda grind out a winning play. We leave the team deep in the bowels of the subterranean city that plays host to the premier league of The Game. Chen is photographed within a throng of money men poring over their new star player. Hauer is kept at a distance. He makes eye-contact, smiling with his protege, but from a distinct, pointedly separate space. A baggier international release goes a little further, underlining this point. We see Sallow back in the desert, talking up a different young player, perhaps hoping to strike yet another blow against the shitheads who rejected him.
Posted by Chris Ready at 13:40:00

Email ThisBlogThis!Share to TwitterShare to FacebookShare to Pinterest
Labels: David Webb Peoples, Films, Joan Chen, Rutger Hauer, The Blood of Heroes, The Salute of the Jugger