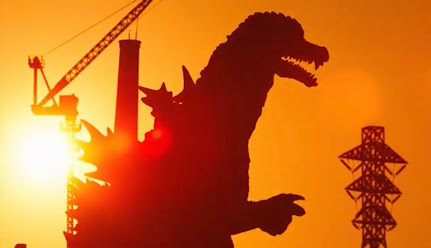 A pair of shorts directed by Kazuhiro Nakagawa, Toho's go-to guy for brief (usually tourist attraction exclusive) glimpses of the King of Monsters. 2020's Godzilla Appears at Godzilla Fest is a sub-two minute piece completed using an iPhone for an online character convention. The slight dimensions of the camera used allow the filmmakers to shoot Godzilla - here represented by one of his more muscular Heisei era suits - from angles that might otherwise prove difficult. The best of these inspections is a point of view shot that seems to originate from the rubble gathering at Godzilla's feet. The angle has a warped, almost fisheye, effect to it - shattered concrete buildings and sagging lamp posts curl in towards the catastrophic weight of Godzilla. Close-ups of the Big G's face aren't quite so forgiving. The auto-focused lens stresses the outfit's rubbery hide to such a degree you begin to wonder if an action figure has been subbed in for a moth-eaten costume.
Far more entertaining is this year's Godzilla vs Hedorah, a 5 minute film produced to commemorate the 50th anniversary of its Yoshimitsu Banno directed namesake. Given more than twice the runtime of Godzilla Appears, Nakagawa recruits the foam latex suits used in Ryuhei Kitamura's Godzilla: Final Wars, a decision that allows the monster actors a greater degree of freedom in their movements. The Godzilla costume - known as the FinalGoji suit - reigns in the stomping cataclysm of the Heisei era with a design that is leaner in trunk and thigh. The creature's expression is different too, conniving rather than impassive. This is Godzilla as a street brawler, the lightweight apparatus even allowing actor Naoya Matsumoto to lift his leg high enough to hurl a kick at Hedorah's wonderfully sludgy midriff. At least as impressive as the two feature costumes is the conflict's arena, a 70s era power plant filled with rusting buildings and collapsing cranes. Nakagawa and cinematographer Yutaka Adachi's photography may have the same rough-and ready feel as digitally shot Tokusatsu television but the decision to use a more natural style lighting in several shots - appearing to emanate from a setting sun rather than flatly oppressive studio lights - beautifully compliments the peeking, human, perspective on this titanic struggle.
Posted by Chris Ready at 01:17:00