Big reveal for Shinji Mikami's opening gambit for Platinum Games, Vanquish. Players look to be cast as a masculine run n' gun retreader, battle-suited and chasing Western audience thump tastes. The shill liberally quotes from Jon Favreau's Iron Man, as well as Neill Blomkamp's Halo shorts, just to keep things familiar. As a threat of sop, it's not quite as shameless as Tecmo's upcoming Gears of War facsimile Quantum Theory, but the idea of a gaming titan like Mikami beavering away at just another mech-man game has inspired yawns.

There's promise in the trail though - an aggravated right winger spends the entire duration vomiting revenge rhetoric over footage of towers falling. Can we expect a satirically minded interacter, offering a one-man power fantasy War on Terror? The battle suit itself looks like a consumer product, Apple-white with Xbox inflections. The anime blocked live action component also cues Super Sentai memories, reminding us that Japan also has a long standing fascination with armoured, beetle-men. There's even a faint whiff of Mikami's underappreciated shoot juggler PN03. Brass tacks: when has Mikami ever put a foot wrong?
Posted by Chris Ready at 20:12:00 0 comments 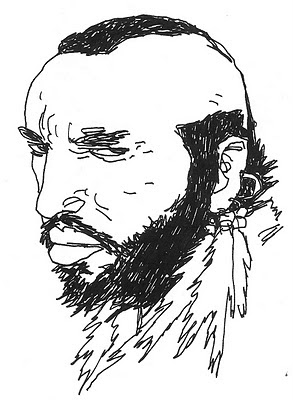 After yesterday's creeping disappointment, I figured a re-take was warranted. Doodled off in a midnight lull, here's a Mr T I can be proud of.
Posted by Chris Ready at 11:45:00 6 comments

In terms of incongruous digital intrusion, Ghost in the Shell 2.0 would have to devolve some way to compete with this sequence from 1983's Golgo 13. Director Osamu Dezaki plays it lighthearted; he introduces the buzzing choppers on an ironic blare, keeps their action strictly tech demo, then kills them off with wild incompetence the second they start to register dull.
Posted by Chris Ready at 21:57:00 0 comments 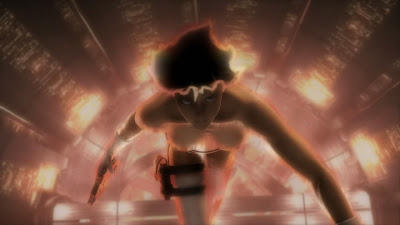 To coincide with the release of his latest feature The Sky Crawlers, director Mamoru Oshii revisits his 1995 production Ghost in the Shell, retuning the classic for assumed contemporary tastes. This update entails jettisoning entire sequences in their original cel form, replacing them with brief computer generated inserts. The effect can be jarring, especially since some of these additions aren't particularly sophisticated.

In certain shots during the opening assassination, Kusanagi's figure appears rounded and polished of detail. Aesthetically, it could be argued that Kusanagi's 'clean' appearance serves to further accentuate her status as a mostly artificial being. Kusanagi does look synthetic, molded and airbrushed like a garish person shaped doll - a choice that prefigures many of the film's central themes of identity.

A shame then that this layering occasionally registers as primitive. The new digital intrusions work best when visualising the vast, all-consuming information mindscapes. What existed previously as blocky green layouts are now a seething, autumnal deluge. If the intention of this update was to salve near-sighted future tech speculation, these unfathomable info clouds succeed. The change of hue also creates a technological through line between this Ghost in the Shell and the sequel Innocence, as well as differentiating the piece from the heavily indebted, green keyed Matrix series.
Posted by Chris Ready at 16:52:00 0 comments 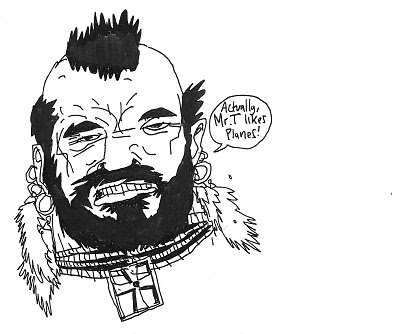 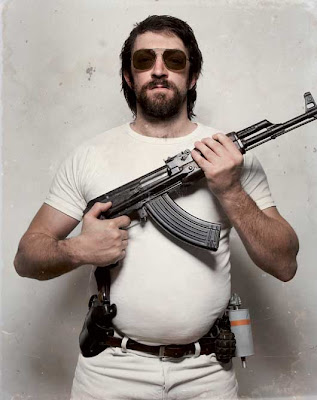 "No need to trouble the Police..." 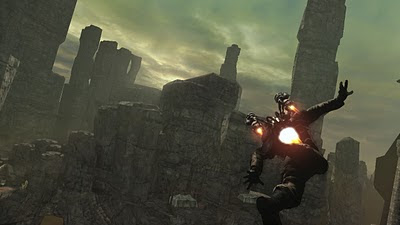 Dark Void spins a derring-doer of Bermuda Triangle reality slips, and Rocketeer accessorising. It's a deeply artless affair, grasping for Uncharted coin and staged with all the propulsion of a postcard. An identikit nobody finds himself stranded in a plush otherworld besieged by lanky automatons. Players must juggle cover and hover concerns as they mope through another bare hero narrative. Best not to spend too much time kicking this about, instead let's focus on a couple of specific anti-fun shortcomings! Firstly grenade cook and toss is hampered by a ruinously extended animation sequence. Press and hold, the countdown begins, but don't forget to allow for a leisurely yawn of throw frames. Players trained to expect an immediate hurl on release will end up with a face full of shrapnel. Secondly, your jet pack avatar has a dispiritingly flexible fragility. Flying about, you can boost yourself full pelt into a mountain and suffer only a dismissive shock. On foot, try and plunge a depth of anything over your character's height, and your figure will flail about in a death spasm. Lastly, melee combat suffers from poor implementation. Classed as context sensitive, rather than another move set aspect, players may find themselves jabbing wildly at activation buttons with little actual result. Windows of opportunity are vague, you'll just as often find yourself manhandled for attempting the thump conversation. Even if you do manage to get your blow out, expect to sponge enemy panic fire - like grenade tosses, melee sequences tumble out without expedience, making you very vulnerable indeed.
Posted by Chris Ready at 21:01:00 0 comments 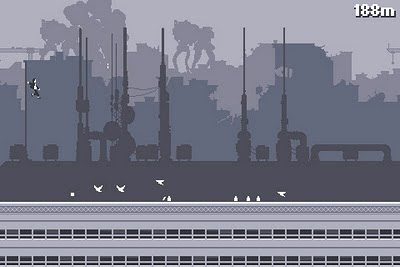 iPhone games struggle with mapping the multiple inputs usually associated with modern video games. In poorer examples players usually end up with confusing drag-tap gymnastics, or, even worse, a controller map stamped on the screen. Not so in Adam Saltsman and Eric Johnson's Canabalt. Tasked with making your daring escape from a fracturing city-scape, players assist a speeding pixel man with well timed one tap leap jabs. Your escapee will always be running full pelt, you simply have to judge the correct time for him to jump. Stress comes in the form of an ever-changing course: buildings crack and tumble out beneath you, alien machinery crashes in your immediate path, and building tops repeatedly fail to sync up. Canabalt seems designed to be played as a rolling series of attempts. Failures are not penalised with anything other than an instant restart, and the anxious invasion funk continues uninterrupted over any number of defeats. Repetition is also nixed thanks to random course generation, you never know what's coming next. 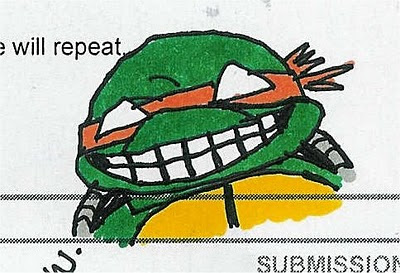 Doodled a lot of Ninja Turtles in work this week. This Michelangelo was the best. Suggestions are in the pipe line.
Posted by Chris Ready at 15:14:00 0 comments

Levels in the 16-bit Sonic the Hedgehog games were dense with diversion. Players could comb multiple stacking routes for secrets and bonuses, or blast right through mach speeding. Above is a finely honed example of the latter. Blast processing! Listen out for a soundscape struggling to keep up with the blistering pace.
Posted by Chris Ready at 21:10:00 1 comments 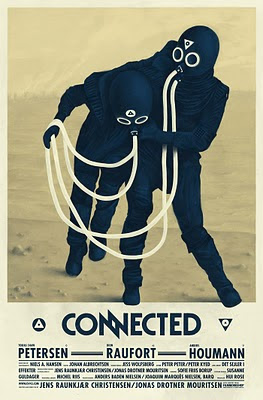 Joaquim Marqués Nielsen and Anders Baden Nielsen's beautiful poster for Danish catastrophe shuffle short Connected. Looks like a deco inspired 20s utilitarian government info dump, crossed with a 70s sci-fi one-sheet to me. Info on the film is scarce, although a brief tease viewable on the film's website suggests something in the vein of Punishment Park or THX 1138. Colour me excited. Art fans, read about the poster's creation here.
Posted by Chris Ready at 20:31:00 0 comments

Shill for the forthcoming Resident Evil 5: Gold Edition. The expansion component offers two new Separate Ways scenarios. The first a move model update of the GameCube Resident Evil remake, offering more torture trap Victoriana, and bullet sponge tracker enemies; the second a concurrent escape plan for a pair of main quest straddler characters. Of the two, the mansion flashback looks the most promising. Funnel halls and brutal co-op traps should inject some queasy claustrophobia, a quality the action-led 5 has previously lacked. Expect wildly incongruous costume changes too. Chris gets a leather daddy Road Warrior ensemble, and Sheva a couple of sex-play dress-up options. Capcom recently polled consumers on how they wanted this made available, and as such the expansion will be sold as DLC as well as retail added value. Hopefully the studio won't get greedy and split the two new chapters into separate currency prompters. That'd be a bit of a dick kick.
Posted by Chris Ready at 13:20:00 0 comments 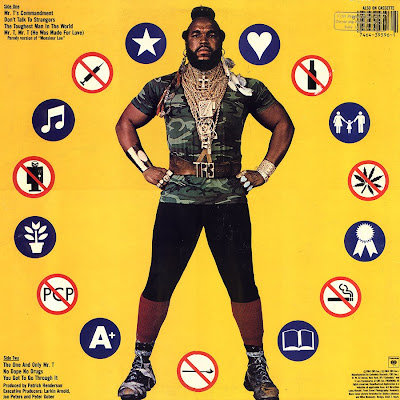 "The strangest thing about The A-Team was Mr T. He was, as far as I'm concerned, a bona fide, credentialled psychotic. He had no benevolence. He drove a fire engine-red Rolls-Royce Corniche convertible. He'd start talking when he got into makeup at 7 o'clock in the morning and he'd still be talking at 7 o'clock at night when he got back into his Corniche. And nobody paid any attention to him at all. He was a very, very strange man."

"These men promptly escaped from a maximum security stockade to the Los Angeles underground..."

Joe Carnahan follows up the confused Smokin' Aces with 80s nostalgia wink The A-Team. A little disappointing to see Carnahan drift ever further away from frostbitten thrillers, but fuck me if the latter half of this shill isn't full of giggling, green screen implausibility. What else do you want in a film street dated for June? Look out for District 9's Sharlto Copley as Disaster Year favourite Howling Mad Murdock. More exposure! More exposure!
Posted by Chris Ready at 17:22:00 0 comments

I'm hoping to get the weekend sketch post back on track. If there's anything or anyone you'd like to see me have a scrawl at, don't hesitate to comment. Even if you don't want to see them, please comment. I'm running dry on inspiration here.
Posted by Chris Ready at 17:16:00 3 comments