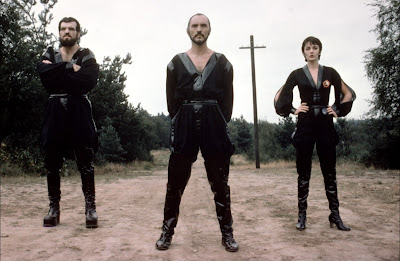 Sired by a deeply troubled production that saw the original saga director Richard Donner junked in favour of Richard Lester's lighter, financially tighter, touch; Superman II perseveres as an entertaining muddle of faintly clashing ideas. Lester's jokey, exaggerated tone actually compliments Donner's big city living. It's as if mankind has gone slightly insane now that the world has a tangible messiah. Everyone acts large, and people take catastrophic risks, assured that they now have a super-safety net should they fall. Is this what inspires Superman's weariness? In Superman II, he seems awfully eager to throw away his powers and position when an office romance opportunity arises. Pratfalls aside, Lois's discovery of Clark's secret identity could be contextualised as a passive aggressive cry for help. Otherwise, are we to believe a God thing that can alter the trajectory of time has serious trouble navigating a rug? With Superman stuck in a navel gazing funk, it falls to Terence Stamp's Zod to bring the fun.

Stamp plays Zod as an autistic vandal, utterly bewildered by anything that doesn't immediately abdicate to his whim. His lack of understanding actually disqualifies his actions as broadly evil, Zod often seems more like a bored aristocratic degenerate playing at being a tyrant. His defining criminal act on Krypton is breaking something that doesn't belong to him. We are given no sense of calamitous sedition, simply that Jor-El possess a bright sparkly toy, so a jealous Zod must snap it. He's a child. It's easy to imagine Zod has a doting, moneyed Kryptonian mother somewhere, always eager to bail her special little soldier out his latest mischief. On earth, his entire agenda is built around a playground bully's idea of submission. He just wants everyone to agree that he's the best. All this makes Zod completely excellent to watch. He has no interest in Earth, and makes no attempt to understand anything. He's instantly bored with any success, and reveals no wider master plan other than cursory subjugation. He has no use for Earth or anyone on it. He just wants their tribute. Kneel before Zod.
Posted by Chris Ready at 13:40:00