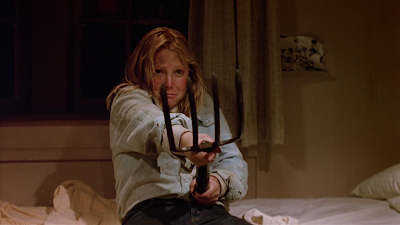 A mechanical follow-up to a stranger film, Friday the 13th Part 2 isn't so much going through the motions as abandoning all narrative meat to focus on the simulation of activity. We have teenagers and a wheezing slasher but neither get to do much. Even collisions between the two parties amount to very little. Deaths in Part 2 are communicated as brief jolts of electricity, designed to shock in the moment rather than thicken the stew. They don't puncture or enhance the atmosphere either, arriving simply as the forgone, lethal, uses of the various sharp props littered about the camp. Entire trainee counsellors disappear without notice too, lost to authorial indifference instead of a robotic mass murderer.

Director Steve Miner follows Part 1's lead, using the camera to propose the unbroken gaze of a hidden prowler while also allowing the hornier elements in the audience to get a good look at the female cast. There's zero sense that Jason takes any great delight in the observation though, frenzied grunts and wheezes are absent on the soundtrack. Both boys and girls are gobbled up with a consistent indifference; a pronounced sexlessness that registers as even more bizarre in a film where the killer uses a spear to lance a post-coital couple. Jason isn't jealous or impotent as an entity within the film but he is being used as a kind of avatar for frustrated, nascent urges within the viewers. Part 2 seems pitched purely at adolescents who cannot possess the older teens they find themselves attracted to. A strange kind of grot that has decided that women are toys and if you can't physically hold them yourself then you might as well watch someone else break them.
Posted by Chris Ready at 12:46:00