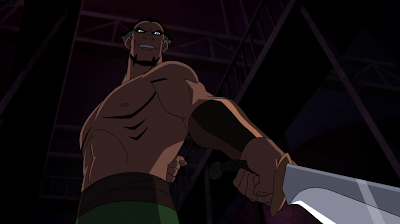 Batman vs Teenage Mutant Ninja Turtles is an odd duck, a straight-to-video crossover between two children's properties that is spiked with nose-snapping violence and second-tier swear words. You'll believe a Ninja Turtle can say 'frig'. Despite being a standalone feature, Jake Castorena's film unfolds like four episodes of a toy cartoon stitched together for a video release - think 1997's The Batman Superman Movie: World's Finest but much less dynamic. The caped crusader plays Akela to his own teenage wards as well as the oozed-up, chainsticking reptiles, beating back mutated Arkham inmates and ninja masters alike.

The story unfolds in self-contained sequences, each structured with the kind of individual beats you'd expect from one of Nickelodeon's 22 minute long schedule fillers. This bagginess, as well as the feature's arthritic sense of moment-to-moment motion, ensures interest flags long before the film's conclusion but at least Castorena and his crew make a real effort to distinguish their characters not just in terms of personality but in how they fight. Batman and Shredder are equally matched, a good father and a bad father locked into contact-combat demonstrations that burn through the animation budget. Best of all, for his finale throwdown with Leonardo, Ra's al Ghul exhibits a twirling, balletic sword style that mixes swashbuckling caddishness with handicapped wuxia.
Posted by Chris Ready at 21:11:00