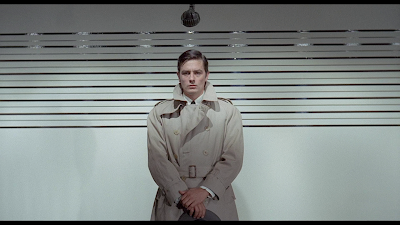 Le Samouraï is the crime film as a series of exacting tasks, each performed - as befits the piece's title -in a methodical, almost ritualistic, fashion. Jean-Pierre Melville's film rejects spontaneity; its central character, Alain Delon's Jef Costello, performs contract executions slowly and conspicuously, preferring to weave dead ends and red herrings into the counter-narrative he provides to authorities rather than, simply, disguise his offence. Paid to shoot holes through a night club owner (for reasons unknown), Costello dresses up in his own idea of ceremonial armour - a sandy trench coat, grey fedora, white gloves and a revolver pistol - then zips around town, establishing a lengthy alibi that ends up providing little protection for the assailed hitman. Once inside the startlingly over-lit jazz club, Jef darts about, perhaps to establish a non-descript figure in the minds of witnesses, or perhaps because Costello isn't quite as cool as his clothing.
Rounded up for an identity parade hundreds deep, many of whom are carrying their own illegal firearms, Jef arouses a city-wide surveillance level suspicion in François Périer's police superintendent despite being almost unanimously dismissed by the night club witnesses. In this way, Melville's film very openly works against a realistic progression of events. This narrative is built to entertain, our enjoyment drawn out of watching how Delon's emotionally inert button man responds to sabotage, both large and small. In deference to the cod Bushido poem presented during the film's opening credits, Jef proceeds as if he is dead. His personal desires and interior perspective are almost completely sunken into the mechanical villainy he is paid to perform. Jef's apartment is sooty and functional, an impersonal space that provides Costello a venue to brood and issue voluminous clouds of smoke for a chirping, appreciative, bullfinch. The Paris outside this room is similarly dour - a concrete and glass modernism, paved over the usual tourist traps. This is a French capitol that terminates into a maze of underground train tracks and inner city dead ends; secret rooms and installations in which cops and criminals ply their painstaking, laborious, trade.
Posted by Chris Ready at 23:46:00