Werner Herzog on... The Jungle

Impromptu German day continues with the first in a hopefully regular series presenting the thoughts and feelings of director Werner Herzog. Here Herzog talks us through his delightfully atypical take on the jungles of South America.
Posted by Chris Ready at 18:24:00 2 comments

Kino International's trail for a newly restored, and near-complete Metropolis. This new 145 minute version is the closest yet to Fritz Lang's original 153 minute German premiere cut, thanks to the recent discovery of a damaged 16 mm dupe of that edit in the Museo del Cine in Buenos Aires, Argentina. The restoration process was bolstered by another curio length print, found in New Zealand, that contained vital seconds missing from the Argentine find.

Dreams do come true! Witness here a collage of inserts and test shots - the first available footage of the Hobo With A Shotgun feature, starring Rutger Hauer as the titular derelict. This on-the-noser is the bastard offspring of a contest to get your trail attached to the Canadian print of the Tarantino / Rodriguez double A-side Grindhouse, Jason Eisener et al won the day with a cheapy nasty about a roaming vigilante bum. Machete gets all the press, but this was the Grindhouse trailer buff Disaster Year was most looking forward to. Not much to go on here, but a grungy 70s vibe is firmly in place. I haven't seen smoke gags look that oily in a good long time. This brief tease is pushing all the right buttons: future-shock lawless, Enzo Castellari's John Carpenter cash-ins, even a whiff of Clint Eastwood's The Gauntlet. Head over to the film's website for a daily trickle.
Posted by Chris Ready at 19:51:00 0 comments

With Marvel vs Capcom 3 on the way, let's take a look back on the rich cultural heritage of the series; specifically the non sequitur trash-talk insults the second installment inspired. Remember folks, these are legitimate distraction tactics. Take it away Yipes!
Posted by Chris Ready at 20:33:00 0 comments 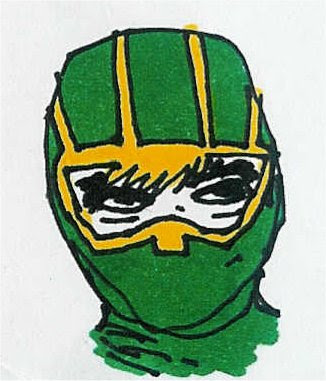 A shifty eyed Kick-Ass. This looks very strange blown up, the original image is about the size of my thumb nail. A lot less sloppy when it's smaller too.
Posted by Chris Ready at 20:05:00 0 comments

It's been ten years since Marvel vs Capcom 2 first hit arcades. Ten long years without a triple A license pile-up fighter. Ten excruciating years since players were allowed to have a plucky Soviet bear-wrestler pack a fifteen foot Sentinel between his legs, and just go buck wild.

There have been a few vague contenders: Mortal Kombat vs DC Universe stunk up the joint, with neutered brand power and sloggy anti-fun; Capcom themselves delivered the perfectly serviceable Tatsunoko vs Capcom in 2008, but it just wasn't the same. The match-ups made too much sense. Where was the exasperating incongruity of a tentacled sky-God battling a yuck-yuck Chinese parable? Had we forgotten the delirious thrill of culture clash? Since 2000, the Marvel license has been on a developer merry-go-round, making any further vs installments seem deeply unlikely. We needn't have worried! A cash-money reception for a recent HD port of Marvel vs Capcom 2 has reignited bean counter interest in this half-forgotten mangler. Back to the well! Marvel vs Capcom 3: Fate of Two Worlds is expected sometime next spring. About time! 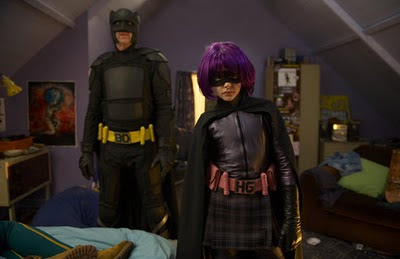 Mark Millar's most recent works have toyed with an idea of implication. Specifically, the lead as a reader analog voicing psychotic rhetoric and acting out repulsive id fantasies. Millar indoctrinates his protagonists into dream worlds, then twists everything apart. The Timur Bekmambetov helmed Wanted ditched Millar's supervillain framing and sexual grotesqueries, turning in a sugar rush tell-off that barely even attempted audience discomfort. Conversely, Matthew Vaughn and Jane Goldman's Kick-Ass re-purpose survives some severe character arc simplification thanks to a rigid adherence to the original text's prank ambitions.

In this new movie continuity, Aaron Johnson's Dave Lizewski gets to assert a Friday-night masculinity. He fucks his girl in an alleyway, and rescues his (thematic) little sister with fairytale weaponry. The journey's smoother, but the comic's impetuous remains. Dave craves attention, usually female. He seeks masculine empowerment through fantasy violence scenarios. He creates a form fitted, blank male super-identity to pursue noble nerd urges in the hopes of snagging himself a missus. Despite some sexuality smoothing, Dave's adventures still lead him wildly out of his depth. His violent do-gooding sees him aligned to a pair of functioning lunatics and hunted by the mob. Rather than become a shitkicking equal, Dave ends as an incompetent comedic compliment to Chloe Grace Moretz's Hit-Girl. He closes the film welted but upbeat. His fizzog frozen in a mutated sneer similar to that of Malcolm McDowell's Alex DeLarge.

Moretz, despite her size, is a thoroughly convincing physical presence. Her fight form is tailored to her speed and stature, tapping into Hong Kong body weaponry as well as the lawless amorality of excited children. Moretz is able to convey shapes and angles completely in tune with brutally straight comic lines. Best of all, Kick-Ass provides a forum for Nicolas Cage to remind dimmer bulbs just how excellent he can be. Cage's Big Daddy is a stiff necked breeze block. A Kevlar Dark Knight with a bundle of excitable colours in tow, his gait and speech informed by Adam West's staccato stab at the cowl. Kick-Ass gives us reams of recognisable bat iconography before neatly undercutting them with a venal lethality. Seeing Cage's Bat-shape roam a blister lit warehouse slitting throats, and firing handguns in extreme close-quarters is a giddy giddy thrill.
Posted by Chris Ready at 19:46:00 1 comments

Email ThisBlogThis!Share to TwitterShare to FacebookShare to Pinterest
Labels: music, The Dickies 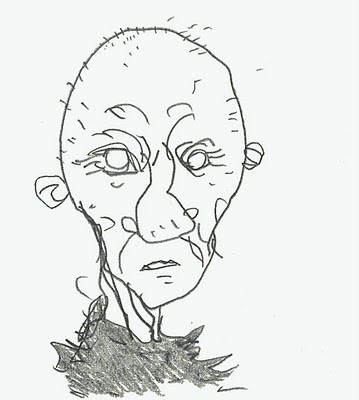 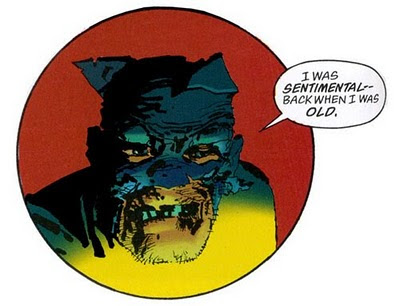 Those in search of good comic reads look no further! David Brothers and pals have taken it upon themselves to dissect the works of Mr Frank Miller in a week long celebration named after an odds & sods Sin City collection. Ladies and gentlemen, I give you Booze, Broads and Bullets! As the title suggests, these essays concern not just the acknowledged classics; toes are dipped into all sorts of under-examined waters.

I haven't yet had the chance to consume the lot, but standouts thus far include:

Supervillain's Sean Witzke on Miller the writer, and the language of psychosis as seen through the overlooked Daredevil: Love and War.

Chad Nevett noodles on the romance of Sin City: That Yellow Bastard.

and Tim O'Neil examines last cases and Bat iconography in The Tao of Miller.

A full index of this project is available here.
Posted by Chris Ready at 23:51:00 0 comments

DVD of the Week: Superjail! 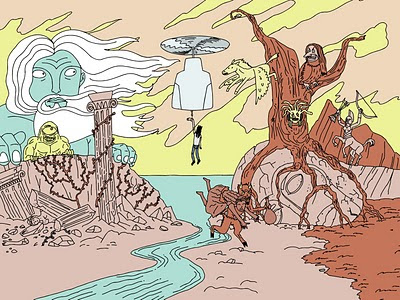 First in a hopefully weekly column in which I pimp something I like just because a recent DVD release makes it vaguely pertinent. April 12th saw the Region 2 release of Adult Swim's frankly wonderful Superjail! This saucy little package contains the entire first season, a pilot short, and a rash of animatics. 2.0 Stereo sound too - Adult Swim, you spoil us! On a previous occasion, Disaster Year 20XX had this to say about Superjail!:

How's that for recycling? Keep it Disaster Year folks.
Posted by Chris Ready at 23:39:00 0 comments

"I didn't see anything."

Disaster Year hero Jackie Chan turned 56 this week. To celebrate, here's the man himself at the absolute apex of his abilities in 1985's Police Story. If you haven't seen Chan's antics in at least the last week it's easy to subconsciously dial down his sheer mindfucking talent. "Surely no-one is that good?" your brain connives. Yes! Someone is! His name is Jackie Chan.

This excerpt is notable for a variety of reasons. First it's the culmination of a successful transplant of Chan's period noble bumpkin persona, here transformed into a good-cop struggling within a corrupt system. Police Story beats Chan's good-natured bobby down with process and indignity throughout, building to a identity meltdown climax where he has to absolutely destroy everything in his path. It's a feet physical take on Eastwood style vigilante justice, with Chan as the instrument of fascistic might-righting. Secondly, the way the sequence is shot is interesting, rather than wide vistas for the kung-fu choreography, you have tight cluttered frames that stress impact, without losing the limb geography. Every blow reads as extremely painful. Lastly, the clip marries Chan's physicality components in one breathless rolling sequence: we see him as both the relentlessly struggling fighter and the indestructible stunt doll. Glowering intensity was generally a poor fit for Chan, as demonstrated by the Lo Wei helmed Leesploitation flicks the star suffered at inception. In Police Story though, he nails it to the wall.
Posted by Chris Ready at 20:02:00 0 comments

Disaster Year loves a good superplay video, and this one's a doozy. PS3 player GUN1T123 goes from 0 to Nuke in under a minute on Modern Warfare 2, thanks to some rather canny enemy placement predicts.
Posted by Chris Ready at 19:27:00 0 comments 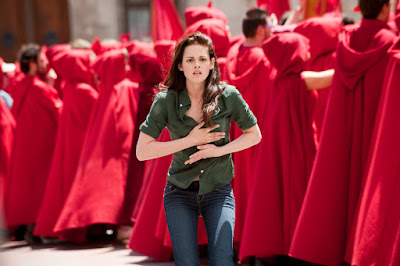 The best thing that can be said about The Twilight Saga: New Moon is that the incessantly mumbled, incomprehensible, muttering that passes for dialogue makes for an excellent approximation of the numb affect noted in teenage interaction. Characters haunt each other, stumbling about gracelessly and vocalising their emotions - spelling their ideas out in clipped, reverential, bulletins. Awkward, thought-collecting beats are mercilessly held as childish mindscapes pore over their next would-be-profound statement. Befuddled suitors wander around shirtless in the rain and, above all, nobody really communicates. The Twilight series is notionally about human dealings with Vampires, although the monsters here are neutered, abstinent, and exempt from any usual supernatural rulings. Instead, they have superhuman athleticism, require no sexualised sustenance, and sparkle in the sunlight.
Robert Pattinson and pals are Vampires in name only. They aren't low nightmarish vermin seeking to establish a one-up on humanity, they're special best friends that fawn over the dull and dreary. The undead family that Kristen Stewart's Bella Swan chums around with are a cabal of mood maintenance parasites able to scan thoughts and indicate futures. Their abilities are so finely attuned they require practically no input from Bella. They revere her for hysterically unsubstantiated virtues, endlessly endangering their cobbled together collective for a girl that reads onscreen as a long, vapid, scowl. There's a vague insinuation that these ancient things are feasting on her raw emotional energy, that Bella's teenage moodiness is a delectable treat for a destitute life-sucker. The idea is never even remotely pursued; these Draculas are much too wholesome. Buckle up for a two hour treatise on frenzied repression!
Posted by Chris Ready at 14:28:00 5 comments