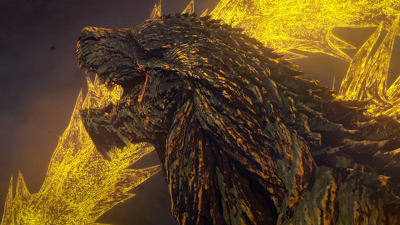 Hiroyuki Seshita and Kobun Shizuno's animated monster series concludes with Godzilla: The Planet Eater, a fatalistic finale that actually manages to make the previous films' luminous-but-stationary aesthetic work for the story being told. After two instalments of abject failure, mankind is teetering on the edge of oblivion, happy to turn their back on turbo-charged technology to pray to an extraterrestrial God who, they are promised, will rid their planet of Godzilla. The aloof, alien Aratrum worship the golden dragon Ghidorah, a being of pure destruction who appears here as three ferocious, shrieking serpents. Planet Eater's Ghidorah are intangible psychic lightning, summoned by a duplicitous holy man and paid for with human sacrifice.

Seshita and Shizuno's film leans heavily into the idea of Ghidorah as a Lovecraftian horror, a thing that exists beyond time and space that cannot be measured by humans, no matter how advanced they are. The film's feature fight - such as it is - mainly involves the ungrabbable Ghidorah heads clamping down on the King of Monsters then draining his life-force. In the shadow of this titanic rest-hold, our human hero Haruo Sakaki goes on a vision quest steered by the pounding rhetoric of the genocidal Aratrum and backed by Takayuki Hattori's surging, crashing score. Seshita and Shizuno's film is, like its predecessors, allergic to dynamic movement so the decision to strand Sakaki's plastic figure in a series of tumultuous, hallucinogenic environments actually works. This strange, loophole of a sub-series finally fulfils its promise with the sight of Mothra's phantom colliding with the Enola Gay, seconds after the superfortress has dropped its payload on Hiroshima and flung mankind into the Atomic Age.
Posted by Chris Ready at 16:31:00