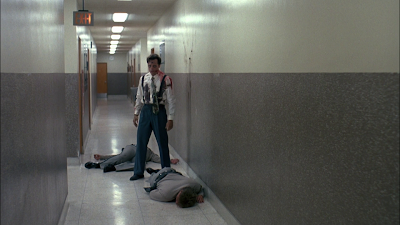 Jason Goes to Hell: The Final Friday, New Line's first crack at Jason Voorhees, forgoes the methodical slaughter of camp counsellors to poke at the kind of oozing, sinewy horror that came to define the sequels of studio stalemate A Nightmare on Elm Street. Jason is no longer portrayed as invincible, swamp-bound musculature; in Final Friday the movie maniac is revealed (nine films into the series no less) as a supernatural parasite when the FBI call in the artillery, obliterating his rotting vessel. Fortunately for us, what's left of Jason is able to jump from body to body, desperately searching for previously unmentioned siblings who hold the key to his continued undeath.

Final Friday is a transitional entry, without any real follow-up, that preps the character of Jason for experiences and ideas beyond regurgitated, panty raid slaughter. Director Adam Marcus, working from a screenplay by Jay Huguely and Dean Lorey, proposes a tidied-up approach to the character, working in plot points and set detailing that tries to make sense of Jason's deliberately vague / contradictory past. In a move that pre-dates that kind of all-conquering brand cohesion audiences now take in their stride, Marcus leaves a copy of The Evil Dead's Necronomicon Ex-Mortis lying about the Voorhees household, insinuating not only a potential future crossover but a means by which Pamela returned her drowned child to strapping, homicidal life.

Other than that, Final Friday comes on like supernatural television, concerning itself with John D LeMay's Steven, a jilted baby-Daddy desperate to prove his worth to his more successful ex, Kari Keegan's Jessica Kimble (Jason's niece, natch). Steven is a dull, white middle-class character played by the kind of actor who would otherwise struggle to make it into the second act of a slasher film. Perhaps aware of this potential for disconnect, director Marcus allows his protagonist to dish out a few meaty attacks on our reanimated villain, even weaving in the kind of slow motion gasp imagery usual associated with exciting films made in Hong Kong. Of course any potential for genuine thrills are immediately undercut by the American censor board's spoilsport approach to cumulative aggression. Rather than rely on an excessive, violent hammering conveyed through staccato editing, Final Friday (when compared to notes and Director's Cut screen captures on German movie censorship websites) is forced to drop gags and impacts, rendering the theatrical release strangely numb.
Posted by Chris Ready at 19:50:00