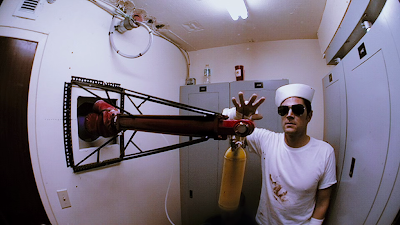 Jackass Number Two is far less interested in foisting chaos on an unsuspecting public. Reactions to the film's towering instruments of self-injury rarely stray beyond the central prankster group. So, instead of a skit terminating on an incredulous glance from a middle-aged man, we either get Chris Pontius sputtering something droll or Johnny Knoxville forcing out a wheezing cackle. This self-contained feedback loop - surely the result of a production model that has completely embraced the gang as celebrities - does several of the film's gags a disservice. They measure their various outcomes against a seen-it-all before audience that, frankly, aren't particularly generous with praise. The only upside then is repetition - why waste a pneumatic fist blasting through a hotel corridor wall on one bruised colleague when you can slowly draw in the entire squad?
Thankfully, not every stunt is performed in isolation. Knoxville's Irving Zisman interludes - successful enough to spawn their own spin-off movie - see the actor-writer-producer slathered in elderly man make-up and, basically, provoking random members of the public to near-violence. This conceptually mean trick works largely because Knoxville both neatly inhabits this ageing piece of shit and is quick on his feet when exacerbating then deflecting the incoming ire. Similarly, the light confrontation of Spike Jonze's recurring bit as an elderly woman whose clothes are falling apart allows the audience to people watch - will anyone summon up the courage to tell this doddery old lady that her blouse is open? Number Two's pièce de résistance though is the superbly cruel Terror Taxi, an extended bit in which Broken Lizard's Jay Chandrasekhar is recruited to kidnap Ehren McGhehey - posing as a suicide bomber - then crash him around a car park, believing that several of his friends have been shot and, presumably, he's next.
Posted by Chris Ready at 22:10:00