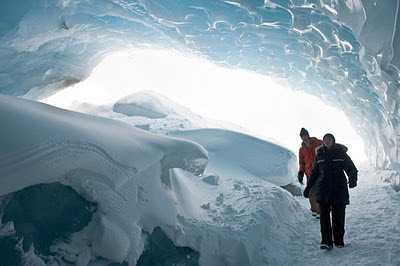 Dishonestly sold as a prequel, Matthijs van Heijningen Jr's The Thing is instead a beat for beat remake of John Carpenter's 1982 model. Minus, of course, pesky things like nuance, or that film's suffocating sense of despair. 2011's Thing is lean to the point of being malnourished. Outpost 31's predicament was a slow burn realisation of utter extinction. This Norwegian camp - staffed by at least as many Americans - instead knuckle down immediately to action movie posturing, lest they burn any of their brisk 90 minute screentime on anything as wasteful as creeping dread. There are no asides depicting husky shaped Things stalking around dozing men here, those infected have apparently mutated through osmosis, programmed to reveal themselves in bombastic fashion when the audience's attention starts to drift.

The psychology of the threat differs too - in Carpenter's film doppelgangers transformed into abstract organ mashes only when cornered, and frequently only as a distraction to allow smaller components to escape. 1982's Thing was desperate to survive, and would tear itself apart to do so. This Thing instead prowls around flashing combat modes at the drop of a hat, changing into insectile lumps to stalk the talent in extended peril sequences like an animalistic dickhead. These forms disappoint too. Rob Bottin created a creature that cannibalised bone and organ to fit utilitarian objectives. Reveal set-pieces were intense, kaleidoscopic nightmares - bearded men battling horrifying, transcendent shapes. Desperately unable to compete, Image Engine have simply lifted ideas from elsewhere, so in 2011 we have Mary Elizabeth Winstead at war with Dead Space's car crash slashers, and a literal human centipede. Although too efficient to be completely awful, The Thing 2011 still resembles poorly conceived jump-start sequels like Predators or Terminator 3. These are films made by people inheriting other's hard work. They have no connection or passion for these creations, and they do not understand these creatures as anything other than a brand ripe for exploitation. This Thing is a merchandise movie.
Posted by Chris Ready at 16:07:00 1 comments

Freddie Wong and Brandon Laatsch accomplishing, in just over one minute of YouTube poop, what James Wong's Dragonball Evolution didn't manage in ninety, namely a credible live action interpretation of Dragon Ball Z that accounts for all of its garbled, lost in translation lunacy. In this short we get the wide, wasteland angles of Toei's spare animation series; lunatic action figure hairstyling; as well as ultra still posedowns and something like dub VA Chris Sabat's hysteria readings.
Posted by Chris Ready at 15:41:00 0 comments

A beardy Lou Ferrigno teaches us the origins of the Ursa Major constellation, from 1983's Hercules. Thanks Lou!
Posted by Chris Ready at 15:33:00 0 comments 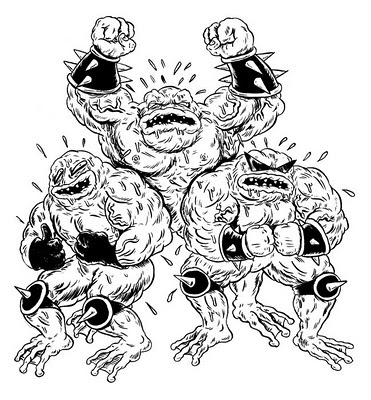 More art by The Warrior of the Wasteland here.
Posted by Chris Ready at 17:02:00 0 comments 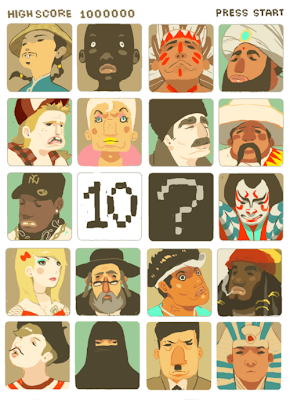 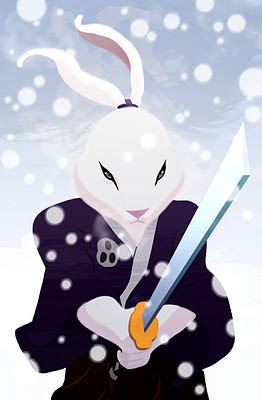 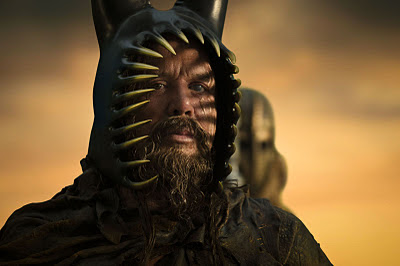 Generally concerned with juggling perfume ad hardbodies and bland hero questing, Immortals briefly springs to life whenever Mickey Rourke's King Hyperion stalks the frame. Hyperion wields the same kind of casual cruelty as Malcolm McDowell's Caligula. Subordinates are routinely mauled to pass the time, enemies bundled into bull shaped ovens to power abstract musical instruments. Enlist in Hyperion's cause and you can at least expect to have your face gashed and genitals obliterated. Hyperion's objective is simply misery. His presence choking all around him while he sits gnawing his way through an unceasing supply of stoney fruit. He's repulsive. Every level of Rourke's performance invites disgust. He fights like an animal, stabbing at eyes with thumbs, and hooking fingers deep into cheeks.

Rourke's performance lifts Tarsem Singh's film, a terrifying villain that lacks any sort of equal, moral opposite. In comparison, Henry Cavill's Theseus is a one-dimensional spear thruster, deeply fixated on equalising sneers targeted at his mother, with a surprising gift for pep-talks. Luke Evans's Zeus simply mopes around with the rest of his Versace pantheon, constrained by nonsensical cosmic laws that sometimes require him to murder his children. This is Greek myth by way of the action adventure assembly line. Gods hamstrung by noble notions of Judeo-Christian divinity, heroes passively locked into dull journeys. Only the baddies get to have any fun.
Posted by Chris Ready at 13:12:00 0 comments

In the early 1990s you weren't nobody if Konami hadn't beaten your likeness into a scrolling arcade fighter. 1991's The Simpsons Arcade Game featured the Klasky Csupo ugly / awesome drafts of the family, bopping their way through Springfield and beyond in an attempt to wrestle back Maggie from Mr Burns. Although staffed with generic, grinning suit toughs, barely a second passes without some form of cameo from a minor series player. This first stage clip features appearances from Waylon Smithers, Super Slugfest (The Simpsons's hyper-violent take on Nintendo's Punch-Out!! games) champion Howard, Martin Prince, Principal Skinner, and Professor Von Brauner (the fat wrestler boss) from the Bart the Daredevil episode. Unlike every other attempt to wring some dough out of the licence, The Simpsons Arcade Game never seemed like a sleazy cash-in. It instead appeared to be a lovingly crafted attempt to bring battle mechanics to the Simpsons universe. Either that or Konami went gaga over the endless succession of revoltingly designed slouch people they had to play around with. Rumour has it we can expect a Live Arcade / PSN re-release pretty soon. Fingers crossed we get Konami's Aliens arcade eventually too!
Posted by Chris Ready at 17:04:00 2 comments

Looks like we're heading back to Los Santos for Grand Theft Auto V. Rockstar's sideways glance at LA last appeared in 2004's hugely ambitious Grand Theft Auto: San Andreas, a game that effortlessly juggled a mid 90s gangbanger narrative, and statewide crime sprees. Bop to the top, and you could set up home in Las Venturas, a gaudy Vegas analog. San Andreas was as close as the series has strayed to becoming a statistics RPG. Financial strategising ticked away in the background, and hero character CJ could go to seed if your caloric intake wasn't burnt off down the virtual gym. Bored gamers could comb the endless forest landscape for an elusive (impossible?) glimpse of a Sasquatch.

Will GTAV match that level of detail? This clip at least suggests the series's satirical bent is intact, at least as much screen time is dedicated to scenes of financial fallout as interactive criminality. GTA thrives in these quiet mission moments - peeling to your next objective, ears full of in-universe shock-jock speak. It's also refreshing that Rockstar North are selling the experience of interacting with a functioning fortress city, rather than just sandbox havoc. Fingers crossed Rockstar North aren't too proud to take pointers from Rockstar San Diego's Red Dead Redemption, a title that did much to de-fuss the company's open-world template. Missions were ruthlessly checkpointed, progression also eased with recharging health and a simplified gunplay system. The developers might also want to take a look at Volition's Saints Row series, which, despite a low-rent personal image, manages to present an easy, intuitive series of control systems.
Posted by Chris Ready at 16:22:00 0 comments 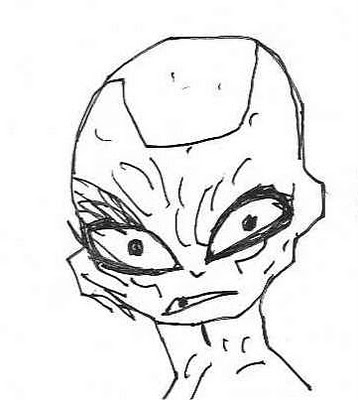 Dragon Ball Z's intergalactic despot after Son Goku has roughed him up good. The androgynous, lizardy Frieza is a villainy high-point for Akira Toriyama's manga masterpiece. He's a brick wall of transformations and power-ups, against which the principal characters exhaust themselves. Despite sustaining horrifying losses to his own personal attache of alien lunatics, Frieza never seems even slightly rattled. Everyone's best, most desperate efforts are child's play to him, until he runs up against a prophecy warrior, created by his own hand.
Posted by Chris Ready at 16:06:00 0 comments

Complete Resident Evil 2 an inordinate amount of times, and you'll be given the option to play through a parody version of the game's The Fourth Survivor unlockable mode. Instead of thugging around as the Umbrella corporation's top bag man Hunk, players get to lark about as a lump of tofu, complete with squeaky comedy sound effects and Mickey Mouse gloves. As you can see by this gameplay clip, Mr Tofu really hates zombie dogs. Get knifed pup!
Posted by Chris Ready at 15:54:00 0 comments

After several middling gameplay clips failed to wow, Resident Evil: Operation Raccoon City finally warms up by shilling on pure nostalgia. Resident Evil 2 and Resident Evil 3: Nemesis have been image plundered to ignite some excite. With full HD remix remakes looking increasingly unlikely for the two PlayStation sequels, this could be as close as we'll get to a bells and whistles re-experience. As well as a Leon S Kennedy NPC running around causing havoc, we get Claire Redfield, the Mr X Tyrant, Nemesis, and William Birkin's mutating G monster. Best of all, we also get a glimpse of fourth survivor Hunk, larking about with the Umbrella Special Forces team. Hopefully, that means Tofu will put in an appearance. Shame, all these face toys seem to be off limits, players stuck playing as interchangeable gas-mask people. Shame. Almost got excited then.
Posted by Chris Ready at 15:38:00 0 comments 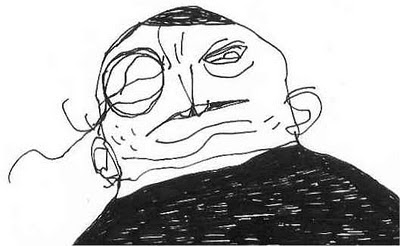 Created by Bill Finger and Bob Kane, Penguin made his debut in December 1941's Detective Comics #58. Recently seen in the Batman: Arkham City video game with a right wonky Cockney accent, not mention thinks and demeanor in common with The Long Good Friday's Harold Shand.
Posted by Chris Ready at 15:25:00 0 comments 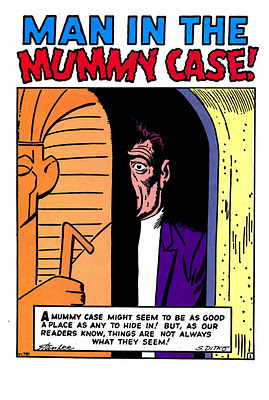 It was Steve Ditko's 84th birthday on the 2nd.

Image via the indispensable Grantbridge Street & Other Misadventures.
Posted by Chris Ready at 10:48:00 0 comments