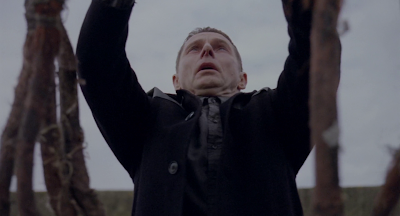 All eighty minutes of Possum revolve around Sean Harris' Phillip and the contents of his duffel bag. By day he skulks around waste ground and other dilapidated buildings, searching for a place to unload the enormous, titular puppet whose aesthetic is equal parts sixth form art project and living nightmare. The creation has a clay head, wearing a face not unlike Phillip's, that sits atop the body and spindly, draping legs of a house spider. By night Phillip smokes and worries, trying in vain to block out thoughts of an apparently ambulatory Possum and the droning news reports regarding the disappearance of a local teenager.

Phillip is contradictory, his social and mental development are clearly arrested, stuck somewhere around the impassioned servility of secondary school. Despite this he presents himself as close-cropped and buttoned-up, a man who takes a certain amount of pride in his drab, freshly pressed appearance. There are vague allusions to time spent on a barracks, Phillip as someone who has acquired a preference for spick-and-span routine as a way to control or dampen his damage. Upon his return to his childhood home, Phillip finds a mouldering ruin complete with no-go rooms and a lecherous squatter with zero respect for personal boundaries.

Possum's rhythms are slow and cyclical, unfolding like a fracturing Cantastorie performance. We are treated to glimpses of a book made by Phillip following the death of his parents, detailing his meetings with the predatory Possum. Harris whispers the accompanying sing-song story, a bleak tale of a child inadvertently inviting this pricking, prodding figure of torment into his life. These passages are intercut with images of thick, tire smoke issuing from clusters of balloons, a celebration suddenly and permanently interrupted. Phillip, not to mention Matthew Holness' film as a whole, seethes with guilt, its lead unable to process the terrible things that have happened to him. Phillip is stuck, a child's mind trying to make sense of alien affections and intrusions, terrified that he deserves what is happening to him.
Posted by Chris Ready at 22:48:00