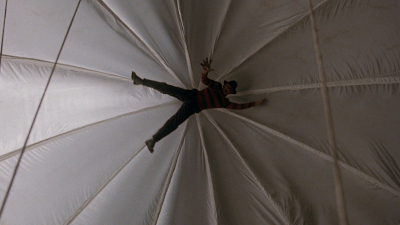 Freddy's Dead: The Final Nightmare proposes big ideas, using blip-blop computer readouts to place us in a near future where Freddy Krueger has grown strong enough to completely dominate his little corner of America. All of Springwood's children are dead, absorbed into the melted murderer after he's had his fun with them. This sinister Quickening has allowed Krueger a certain amount of power over the real world, blurring the lines between waking and dreaming life. In Fred's dominion the streets loop in on themselves, trapping visitors; the remaining, shell-shocked adults shuffle around dilapidated fairs, either hysterical at the sight of youth or lost to an unresponsive funk.

This idea, like many in Freddy's Dead, is really only a fleeting aside. Minutes burnt on the feature clock as the film churns on through other, only partially developed, sequel pitches. Freddy's Dead is to be a funeral after all. Why waste original thinking on that? To her credit, director Rachel Talalay does at least attempt to invest her film with momentum - actors hurl themselves into shot while the nightmare sequences that bleed into the film's reality are conducted with a manic, elasticated zeal. The real let down is the script, credited to Freddy's Nightmares writer and hotshot New Line producer Michael De Luca. No idea is adequately developed, the film doesn't feel designed, it's simply a series of half-hearted sketches pummelling their way towards a conclusion.

The one fragment of cohesion in the film arises from the unspoken bond between Lezlie Deane's Tracy and Lisa Zane's Maggie. They have both suffered under abusive fathers. When facing their demise, Freddy's Dead's male characters are tasked to struggle with a speculative impotence, typically the loss of complete physical control over their bodies. In contrast, the women are fed into night terror scenarios constructed out of trauma they have already experienced. They are being explicitly confronted with their past. Tracy is locked in a sweltering, cluttered apartment with her hulking, sexually aggressive father. No matter how she beats and pounds at his face, he still keeps rising for more. Maggie's dreams take her even deeper, trapping her in a forgotten life as Krueger's young daughter. She discovers her father's lair beneath their perfect, picket fenced house then watches, powerless, as her mother's head is dashed against the stairs leading to her tree house.
Posted by Chris Ready at 11:20:00