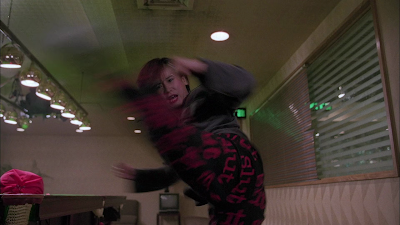 Action packed doesn't quite do Angel Terminators 2 justice. Lau Chan and Chun-Ku Lu's film - also known as The Best of Lady Kickboxers - is ninety minutes of relentless argy-bargy. Every scene and sequence in Angel Terminators 2 quickly tracks towards some sort of disagreement or quarrel. There are very few quiet moments in the film; comedy interludes introducing kindly older uncles quickly degenerate into slapping and name-calling before the principles swiftly exit. Even a celebratory night out for a group of teenagers - welcoming Yukari Oshima's Bullet home from prison - ends with the yelping youngsters pouring their beers all over each other.
Bullet and best friend Chitty, played by Moon Lee, are the resident martial arts experts in a youthful, relatively carefree, friendship group that includes a pair of lusty, interchangeable, nerds and a melodramatic boyfriend and girlfriend - the latter of whom follows a dream of superstardom that, tragically, turns out to be hopelessly naïve. Bullet's father, played by Jason Pai Piao, is a Hong Kong cop who quietly frets about his wayward daughter. His partner, Sibelle Hu's Big Aunt, is a wisecracking lethal weapon, happy to rough up any criminal who crosses her path. These two disparate groups are, eventually, united in pure bloodlust thanks to the antics of Big Mad, played by Chi Yeung Wong, an up-and-coming crime boss who blasts enemies and allies alike.
Bullet is driven to a Molotov clutching mania by the actions of Hong Kong's hostess gangs. She attacks the pimps - who strung her friend out then murdered her - with the aforementioned petrol bombs and twirling, slow-motion, machete swipes. Despite a star turn from Oshima, decked out in big graphic track pants and a knife edge haircut, Angel Terminators 2 doesn't let the actress hoover up all the screentime. Lee and Hu end the film besieging an island stronghold and killing dozens - Lee somersaults around in a silver windbreaker while Hu, dressed like super-militarised American law enforcement, sneaks around the perimeter picking off hoodlums. Hu's shotgun (this particular pyrotechnic apparently borrowed from the set of Hard-Boiled) fires body-shredding buckshot, incendiary rounds and perhaps even landmines, judging by the sand churning detonations that Sophia Crawford's blonde heavy struggles to outpace.
Posted by Chris Ready at 14:12:00