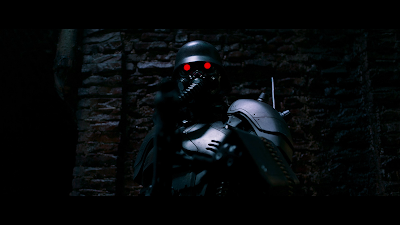 Given the Stahlhelmed cyborg at the centre of the film's PR campaign, it seems reasonable to assume that Illang: The Wolf Brigade will be a (poorly timed) Axis-chic update of Fahrenheit 451. The pieces are in place - a brainwashed jackbooter slowly puzzling his way through a slippery political situation and the compromised freedom fighter he's fallen for - but appearances are deceptive. Writer-director Kim Jee-woon and co-writer Jeon Cheol-hong's adaptation of Mamoru Oshii's long-running Kerberos Panzer Cop multi-media franchise jettisons the alternative history underpinning the series. Rather than a post-Nazi occupation Japan struggling to assert an individual identity, Illang takes place in a freshly unified Korea suffering under the withering glare of international interest.

Despite the pointedly fascist iconography, not to mention civilian shredding action, Illang isn't particularly interested in exploring a Korean junta. The film's plot is instead built out of internecine crosses and double-crosses. Character's interior motivations are fiercely guarded, to the point of being dull, lest we guess whichever twist is being cued up next. Gang Dong-won's lead blackshirt Im Joong-kyung suffers the most. The actor plays the part shallow and robotic, his interactions with Han Hyo-joo's brittle love interest suggesting a spectral half-humanity trying to latch onto someone else to use as fuel for his explosive, expert violence. Kim has priors in this space, his 2005 film A Bittersweet Life brilliantly explored the willing mechanisation of an emotionally inert male. Unfortunately Illang's plot isn't interested in supporting this kind of performance. Im is presented as an unknowing, easily manipulated pawn until the filmmakers believe it's exciting for him not to be.
Posted by Chris Ready at 22:13:00