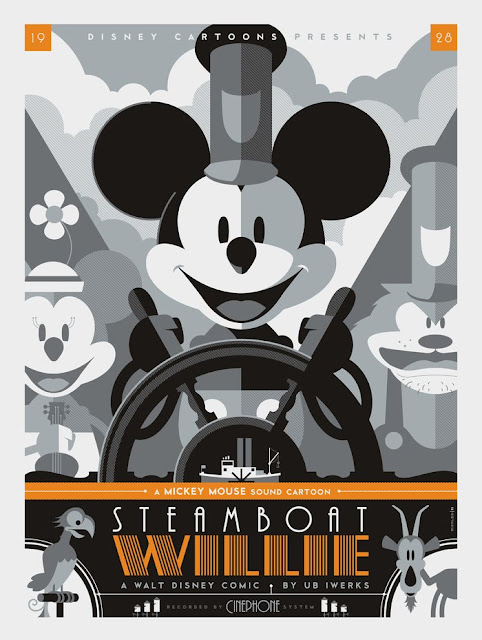 With Modern Warfare 3 allegedly farmed out to a variety of upstart and old-hand studios to meet a November ship date, perhaps those looking for more cohesive feet-on-street thrills would be better directed to Battlefield 3? This tease zips on reportage soldiers and Terminator percussion, all the better to help you get your machine think on! Mind you, it's not like EA haven't been working DICE like slaves, with the studio juggling last year's Battlefield: Bad Company 2, as well as Medal of Honor's package highlight multiplayer mode, all while struggling to follow up a PC gaming masterpiece flexible enough for multi-platform. Mensch work!
Posted by Chris Ready at 15:10:00 0 comments

The Rolling Stones - Memo from Turner 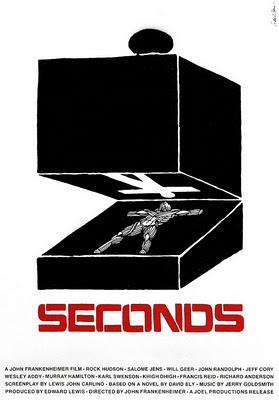 The last time we saw Dead Island it was a thirty second tech demo of lush tropical islands capped with a bothersome zombie attack, and a 2008 release date promise. Three years later and still nothing to play, how do you get people talking about your game again? A three minute mini-movie that dabbles in fraught, domestic despair ought to do it!
Posted by Chris Ready at 11:36:00 0 comments The Social Network provides a pretty stunning case for the screenwriter as primary author. Film is typically thought of as a director's medium - if a film picks up praise it is likely to be heaped upon the person who helmed the picture. The screenwriter is often lost in the plaudits muddle, only occasionally rating a mention. Film criticism is especially guilty of this practice. Often it's an aesthetic concern, ascribing authorial intent to a groaning list of contributors is messy, making for dense, clumsy sentences. Much better to pick one figure and build your argument around them. You can always make the case that the director has final say in most instances, meaning a film is reflective of their taste and choices.

Unfortunately for that writing model it is impossible to talk about The Social Network without mentioning screenwriter Aaron Sorkin. To attempt to do so would be dishonest. Although it is folly to ascribe total intent to one individual in a collaborative medium such as film, certain people invite this kind of notice. Aaron Sorkin is one of them. The film is driven by his characters and his words. Sorkin's authorial stamp threatens to overwhelm director David Fincher's. The film motors on Sorkin's main obsession - intelligent and capable, but essentially damaged, masculinity. Devoid of any real thriller through-line the film zips on jigsaw puzzling scenes of arrogance and conflated ego. The Social Network is endless scenes of brilliant young men with varying degrees of social or sexual entitlement yammering and swiping at each other over the nature of authorship. It should be mind-numbing. It isn't because Sorkin can make the frazzled, contemptuous sneers of deluded dickheads sound like pop music.
Posted by Chris Ready at 23:09:00 0 comments

Email ThisBlogThis!Share to TwitterShare to FacebookShare to Pinterest
Labels: music, The Klams

Yipes vs Marvel vs Capcom 3

For the faithful, here's twenty five minutes of just-dropped thoughts on Marvel vs Capcom 3 by motor-mouthed contender Yipes. Mr Mendoza talks us through his Marvel vs Capcom 2 mains Magneto and Storm, as well as tips n' tricks for newcomers Dante from Devil May Cry, and Spencer from Bionic Commando.

If none of this means nothing to you, Yipes was fighter community famous for smack-talk Marvel vs Capcom 2 combo vids brimming with nonsensical insults. His Mahvel Baybee! clip even enjoys some meta referencing in Marvel vs Capcom 3, with both Magneto and Sentinel available in the alternative colour schemes featured in that video. Fuck the Knicks!
Posted by Chris Ready at 19:56:00 0 comments 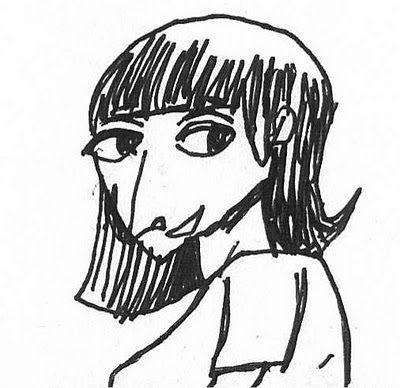 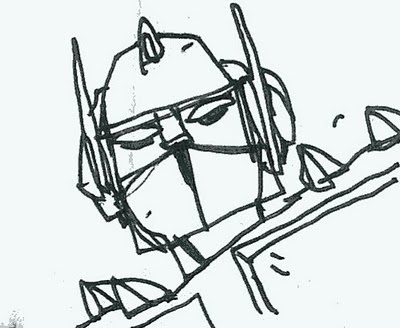 I think Pretty Girl has a whiff of an Osamu Tezuka lady about her. It's the eyes and nose. Optimus Prime is, of course, his Generation One self.
Posted by Chris Ready at 21:00:00 0 comments

In contrast to Transformers hyperactive image avalanche, Captain America: The First Avenger sells on a more romantic, human action, teasing flirty relationships amongst sci-fi slanted Second World War secret servicing. Phew! Ahead of Matthew Vaughn's 60s set X-Men: First Class, the period setting is a novel twist for a genre close to saturation point. Plus! Who doesn't get a kick out of seeing the primary coloured Cap existing alongside bleach bypass GIs?
Posted by Chris Ready at 20:29:00 0 comments

Red alert! Paramount's ad department does it again, crafting a pre-release tease for an upcoming Transformers film so dense with the impossible you're briefly convinced you've just got a glimpse of something very special. Transformers: Dark of the Moon promises finality for Michael Bay's series; this shill delivering a super-state Optimus Prime and a shuddering, invasion apocalypse. Disaster Year welcomes our new mechanical overlords!
Posted by Chris Ready at 10:49:00 0 comments 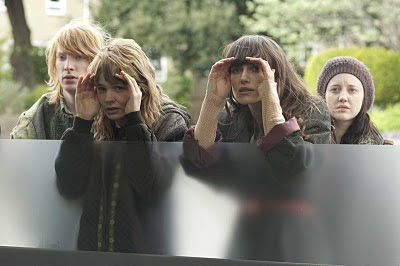 First and foremost, Alex Garland and Mark Romanek's film captures the overwhelming sense of otherness that dominated Kazuo Ishiguro's book. Never Let Me Go features a group of people with preascribed cancellation orders. They aren't to live and dream, instead they have placeholder lives that rattle along in a directionless funk whilst their organs mature, ready for harvest. This deadline, and the total anonymity of their upbringing have apparently created a noticeably different state of human being. The clones raised at Hailsham pride themselves on a kind of emotional neutrality, their only sanctioned expression through competitive art. As they go out into the world, they are compliant, and often complicit, in their dilemma. Escape, apparently never considered.

The horror of this situation is that this isn't necessarily their natural state. They have been taught to act this way. The world views them as alien, so that is how they act. They aren't even considered human by those most sympathetic to their plight. They are conditioned from birth to be other. Romanek's mise en scene toys lightly with this inhumanity; Never Let Me Go's world is one of seaside resorts and provincial motoring, all frozen in a mid-twentieth century malaise. The organ trade doesn't feed into some horrific off-screen future war, instead, it quietly and discreetly extends the lives of self-designated superiors at the expense of an underclass of children.
Posted by Chris Ready at 18:07:00 0 comments 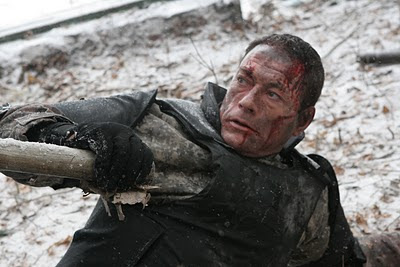 A dour sci-fi nasty that operates on a clipped shorthand. Machine men batter and brutalise each other against a derelict Soviet backdrop, their violence an atypically ugly MMA stomp. Jean-Claude Van Damme plays a lined relic, kidnapped and doped up by panicking officials to face a rogue muscle monster with a pit bull mindset. Dolph Lundgren floats around as a confused clone, fixated on violent repetition, but unable to understand why. None of the UniSols display any recognisably human traits. Each is an automaton locked into their own distinct mechanised predicament. Further to this, Van Damme's character doesn't triumph because of any underlining humanity, rather Deveraux is simply the most recently maintained - his performance supplemented by a battlefield deployed syringe of psychotropic amphetamines. Everyone in Universal Soldier: Regeneration is alien; no-one can be related to. These aren't men anymore, and the film knows it. It revels in it.
Posted by Chris Ready at 17:35:00 0 comments 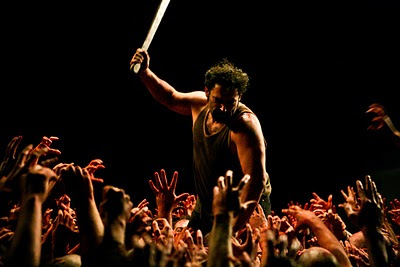 Everybody in The Horde is revolting. While Paris burns a team of plainclothes police raid a rotting tower block with the extracurricular intention of rubbing out a group of cop-killers. Captured and beaten, the group is then forced to team up with their vicious quarry when the sprinting dead appear. Although not particularly moral to begin with, the sky rise slaughterhouse brings out a poisonous venality in our survivors. Loyalties are reconfigured, then shed as ruthless personal safety becomes everybody's primary concern. Power shifts rapidly as the survivors struggle to fend off the berserker zombies and dangerous ego trips. The Horde is notable for inviting viewers to re-evaluate how they view the stampeding dead. Are they meat things to be gleefully pulped, or ex-humans we should pity?
Posted by Chris Ready at 17:14:00 0 comments 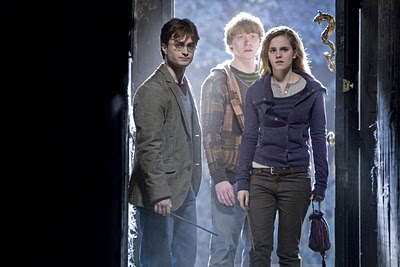 Three children struggle to vanquish ultimate evil, armed only with oblique, seemingly useless clues and tools. The payday split serves this half of Harry Potter and the Deathly Hallows well. Shorn of its triumphalist twin, this Hallow plays like a defeatist mood piece, concerned only with the relentless assurance that these kids are toothless and alone. The break also allows extra-curricular detailing to creep in. Depressed waifs cling to each other while a catchy dirge plays, and the full impact of Voldemort's ethnic cleanse agenda is teased through a series of ruined postcard images.
Posted by Chris Ready at 23:01:00 0 comments

The Running Man by Yoshiaki Kawajiri

Yoshiaki Kawajiri's followed his directorial debut on the Lensman TV series with this, a segment for anime anthology Neo Tokyo. This short reads like a career mission statement. Away from E E Smith's space operatics, Kawajiri crafts a moody smoke piece about a Deckard alike investigating the career of a catatonic race-man. The Running Man prickles with Kawajiri concerns, particularly psychic powers and metamorphosis - the short climaxes with a man-machine hybrid losing control of his meta energies, transforming into a vile, but apparently operational, parody of itself. US readers might recognise The Running Man from MTV's short lived Liquid Television imprint.
Posted by Chris Ready at 13:26:00 0 comments