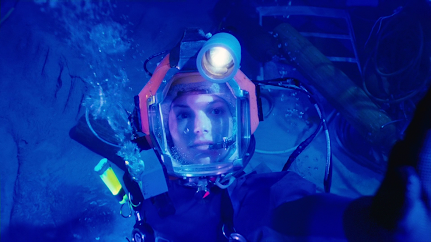 The Abyss is a cacophony of drips. Anxiety rolls off the film in waves; the viewer made to feel the cold, pruning, ache that comes with occupying a leaky metal box that has been sunken into the pit of the ocean. Tasked with providing a base of operations for Michael Biehn's jittery SEAL rescue team when an American nuclear submarine goes bottom up, Ed Harris' Bud Brigman, and the crew of the Deep Core experimental drill platform, suffer their way through a steady stream of escalating dangers. The personal hell of having to share a collapsing space with an inflexible ex-wife he's still very much in love with - Mary Elizabeth Mastrantonio's Dr Lindsey Brigman - turns out to be a minor discomfort for Bud when compared to the litany of hazards that await them all beneath the waves. A flooded Ohio-class tomb gives way to a series of close encounters compounded by swirling topside storms, a spiralling international crisis, and a dead-eyed psychopath who has taken possession of a Trident warhead.
Rather than contrive a film's worth of interjecting hazards, writer-director James Cameron wrings drama out of his established milieu: bad oxygen tank mixes cause comas in the early going, while bulkheads buckle and burst when placed under incredible pressures as we plummet into the second act. These disasters don't present as contrivance either, they are a checklist of worst-case scenarios. The nightmare thoughts that have, quite obviously, crept in while Cameron was himself living through his own, practical, research. Every calamity feels strangely inevitable, the logical outcome of the film's obstinately perilous circumstances. Even Biehn's Lt Coffey, although happy to follow whatever apocalyptic orders are beamed down to him from his bloodthirsty superiors, explicitly suffers through a neurological episode caused by the intense physical strain of diving, then maintaining, the human body at so deep a depth. Typically a sensitive, even romantic, proposition in Cameron's other films, this Biehn performance exists at the other end of the emotional scale. Coffey is tremulous and chlorine-stained; a highly strung soldier attempting to power through a failing physical and mental state by repeatedly drawing a boot knife across his own forearm.
As great as Biehn is, the film belongs to Harris and Mastrantonio. The hysteria their later scenes generate is so strong - so violently and nakedly distressing - that they actually end up unbalancing the film, vanquishing CG sequences that explicitly entertain the total destruction of mankind. This being a James Cameron film, The Abyss does not have just one finale. A tense submarine chase resolves with the estranged Brigmans trapped in a flooded, sparking, submersible. With one oxygen mask and tank between them, the decision is made - by Lindsey - to allow herself to drown while Bud tows her body back to the remains of the Deep Core. Harris screams and slaps his way through a seemingly hopeless resuscitation, the actor appearing to purge himself of the nervous breakdown-level exasperations associated with shooting a special effects film while genuinely submerged in stinging water. Everything that follows Lindsey's resurrection feels like a winding, superfluous, comedown by comparison. The scale of potential destruction may have increased massively - as well as having a sunken nuclear warhead in play, this Special extended Edition ratchets up the Cold War tensions and introduces the threat of multiple mile-high tidal waves - but the claustrophobic terror we intruded upon earlier has been settled and, to a degree, dispelled. Lindsey and Bud have already reconciled.
Posted by Chris Ready at 15:11:00