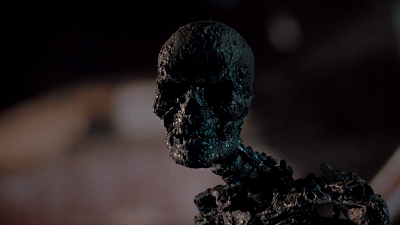 Continuing a series trend for sympathetic depictions of its teenage victims, A Nightmare on Elm Street 3: Dream Warriors takes place in a psychiatric unit for troubled children. Chuck Russell's film, working from a screenplay credited to Russell, Bruce Wagner, Frank Darabont and franchise creator Wes Craven, doesn't attempt to damn these adolescents for the damage they've experienced or visited upon themselves. In that sense Dream Warriors stands apart from the usually prudish morality of a genre that often attempts to massage large-scale evisceration with unlikable, bullying personalities.

Heather Langenkamp returns as A Nightmare on Elm Street survivor Nancy Thompson, sporting a traumatic shock of white in her hair and working as a therapist for the young patients. Nancy rallies the besieged kids, using Patricia Arquette's Kristen as a psychic anchor in their fight back against vile old Fred Krueger. Not only is Dream Warriors unwilling to condemn its mixed-up cast, it also allows them to rally against the sins of their parents using weapons derived from the moral panics of suburban America. Disabled hobbyist Will uses his Dungeons & Dragons knowledge to attack Freddy with arcs of Elfen magic while former drug addict Taryn dreams herself as a punked-out street tough, able to fight and navigate the kind of alleyways in which she previously felt addled and helpless.
Posted by Chris Ready at 16:40:00