Galvatron and Kang the Conqueror by Geoff Senior 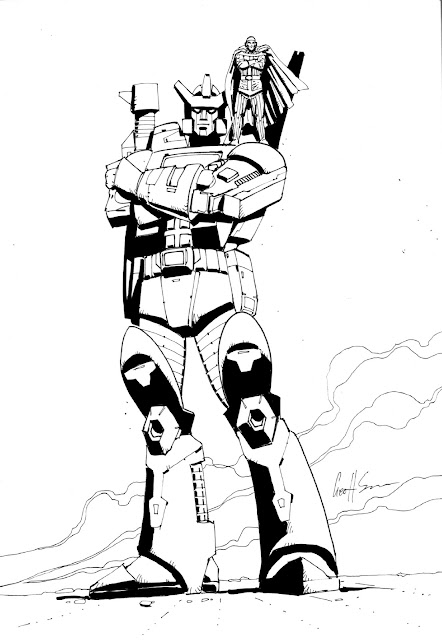 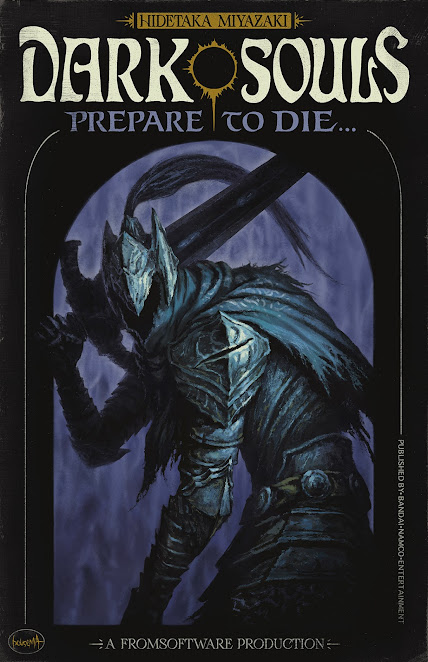 Nirvana - Something in the Way (Live at the BBC)

For a character that has been booted and rebooted to the point where any sense of permanence or progression has been subordinated to an endlessly regurgitating state of origin, Matt Reeves and Robert Pattinson's take on the caped crusader manages to eke out a place of its own in this ever-expanding pantheon by making him deliberately inexpert. This desire to play the masked vigilante as disconnected and insufferably weird is just enough to numb the nagging feeling that, perhaps, the Dark Knight might be better served by a period of hibernation. Although the overarching story is completely dissimilar, this The Batman is grounded in themes and ideas that didn't quite make it to the screen when Frank Miller and Darren Aronofsky were circling Warner Bros' prize property in the early 2000s - a Bruce Wayne estranged from the gaudier aspects of his wealth and a Batcave that, rather than occupy a cavernous space beneath a mansion, is actually a cordoned off stretch of abandoned subway.
Like Miller and Aronofsky's recalibration, this Bruce Wayne isn't portrayed as worldly either. There's zero sense of the globetrotting pilgrimage that underpinned Christopher Nolan and Christian Bale's shinobi cinema take. Reeves' Batman has put down roots then rotted, a phantom committed to drifting along the streets that claimed his parents. Pattinson offers up gauntness, a malnourished cigarette stink that is reflected back to him by a Gotham filled with blaring video screens and neo-Grecian majesty; a city resplendent with ill-gotten gains and drowning in a constant downpour. Suited up, Pattinson's Batman isn't played as intimidating either. The street-level cops he interacts with are not awed by his supernatural presence, they treat him as a nuisance - an unwanted physical affectation that, for some reason, is allowed to pollute their evidence gathering procedures.
Pattinson has a theatrical, carnival, quality to his looming. The horned cowl he wears more evocative of a Victorian depiction of The Devil than the usual animisitic totem. Batman as a dressed-up, Spring-Heeled Jack style, eccentric rather than the world-shaker who counts Superman amongst his friends. This Batman then has been plucked out of folklore and deposited into a particularly dour police procedural. This clash plays beautifully, at least at first, largely thanks to Pattinson's decision to not adapt in the slightest to the superhero production line. Rather than a gleaming Adonis, this masked vigilante is sinewy and violently unhinged; his venom maintained by poisonous-looking chemicals that can be injected into his body when he finds himself in dire need. Firmly located within sodden squalor, Reeves and Cinematographer Greig Fraser's film very obviously strives to evoke David Fincher and Darius Khondji's despondent work on Seven but the invocation frequently plumbs deeper influential depths.
A constant technological prickle recalls the uneasy symbiosis of analogue and biomechanical machinery tidied into every frame by Ridley Scott and Jordan Cronenweth on Blade Runner. In the early goings, eyes gather and compute long strings of visual information, spitting out leads for this button-pushing meddler. It's a shame that the demands of Bruce Wayne's case have him leave this visually unusual feedback loop; damning his interactions to yawning exposition dumps and criminals casually surmising their murderous intents. Although the aesthetic is often sublime, the actual structural mechanics underlining this beauty frequently work directly against the spell. As well as an elasticated relationship to bodily harm that (bizarrely) aligns him with his Warner stablemate Daffy Duck, Pattinson's Batman isn't just dim, he's blank. An empty vessel just waiting to be filled up.
Mouth-foaming data is batted aside, more than once, when Bruce Wayne finds his way to another, contradictory, perspective. There are sequences in the film where Batman dutifully trots from meeting to meeting, instantly rearranging his entire outlook based on nothing more than the last thing that was said to him. The character's strongest convictions are the revulsion he feels regarding firearms, an abstinence he lords over those who plainly weren't rich enough to keep a butler on staff to teach them the ins and outs of Spanish martial arts. In a film where, comfortably, hundreds of innocent civilians are swept away by polluted filth, why shouldn't Zoë Kravitz's Selina Kyle shoot a man involved in the brutal murder of her lover? Similarly, Batman's yelping admonishment of the supervillains he faces comes off as rote and sanctimonious in a film where the Bruce's public-facing persona is a barely maintained shadow. Scenes designed to draw clear lines under the idea that Batman and his foes are reflections of each other repeatedly fail to land because of the voyeuristic strangeness constantly being generated by Pattinson. If anything, Wayne Jnr's unholy quest to pummel turnstile hoppers makes considerably less sense than a violent uprising determined to rid a terminally compromised city of its parasitic ruling class.
Posted by Chris Ready at 20:59:00 0 comments 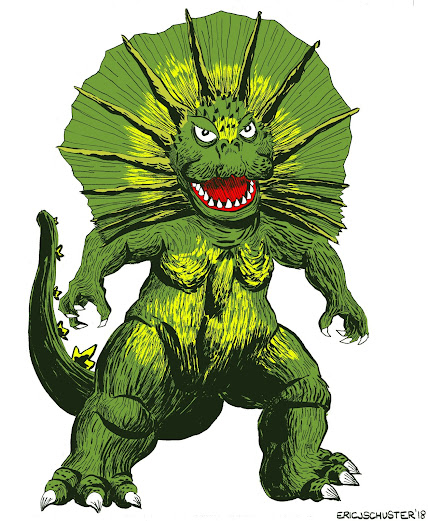 As confident a directorial debut as you're ever likely to see, Jimmy Wang Yu's The Chinese Boxer (released as The Hammer of God in some territories) constantly looks for ways to submerge the viewer into the personal and physical stresses facing the film's hero. Wang Yu plays Lei Ming, the last survivor of a Chinese martial arts school levelled by supernatural Japanese invaders and their Chinese collaborators. Although at death's door himself, Ming swears revenge. Wang Yu, who was coming to the end of his time as an underpaid in-house talent with Shaw Brothers Studios, was in his mid-20s when he wrote, directed and starred in The Chinese Boxer. With that in mind, the film plays like a calling card for potential investors in Wang Yu's future blockbusters - the actor presenting himself as a matinee idol uniquely attuned to the bloodthirsty cravings of his audience. Chinese Boxer then is restless and constantly inventive. Wang Yu and cinematographer Shan Hua never play it safe with their shots, avoiding typical, locked-down, glimpses of backlot sets that had to have been laundered through dozens of features at this point.
Action photography is similarly untethered, thrusting itself into straining grapples to better capture clenched teeth or circling a shrinking exchange with a massing, barely removed, mob. The Chinese Boxer really sings though during the body-smashing training Lei Ming subjects himself to while on the path for revenge. Although a routine premise now, Chinese Boxer's tale of a broken kung-fu student rebuilding his body through stressful drilling was novel at the time of the film's original release. Wang Yu and Shan Hua get to create a visual language of their own when considering these wilful, transgressive, transformations. Their model emphasises the horrific nature of the changes being enacted on a vulnerable - even sickly - human body. Surrounded by cobwebbed gargoyles, Lei Ming plunges his hands into boiling sands in an effort to create a callused pair of claws. The sequence careens at a Satanic fervour - the horrendous carvings bring themselves to bear on the soundtrack, laughing and snorting at Ming's torturous metamorphosis. Wang Yu doesn't neglect the frail human element in these macabre rituals either: although Lei Ming achieves his deadened technique, his hands are irreparably changed into bubbling talons that must be wrapped in surgical gauze to avoid becoming infected. Ming then is the hero as wounded and maniacal; lousy with a sickness that can only be purged through (righteous) violence.
Posted by Chris Ready at 18:42:00 0 comments 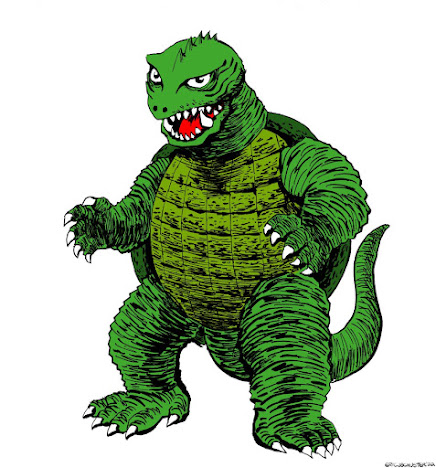 Originally put together for an early 2000s DVD release by restoration supervisor Mike Matessino, producer David Fein and visual effects supervisor Daren Dochterman, Robert Wise's Director's Edition of Star Trek: The Motion Picture has drifted in limbo for the intervening decades - missing out on an entire generation of home video - thanks to a lack of forward-thinking when rendering the extended version's additional special effects shots. Specced (or more likely budgeted) for television broadcast and standard definition discs, the film's longer version was lumbered with an interlaced master; its elements lacking the kind of pixel bandwidth necessary to extract a high-definition alternative. Wise's preferred edit is only now available in 4K thanks to an unusually diligent restoration project that has, lovingly, reconfigured a film so time poor in terms of its original post-production that it was delivered wet to its premiere screenings.
While it's difficult to not be sceptical about an expanded cut that arrives 17 years after the helmer's passing, Star Trek: The Motion Picture - The Director's Edition - although superficially similar to the 1997 Star Wars Special Editions - betrays little of the obnoxious third-party tinkering that George Lucas subjected his space opera series to. As with the previous DVD edit, The Motion Picture now opens with a Jerry Goldsmith overture, priming its audience for the more sedentary rhythms associated with Biblical epics. Extra moments and character clarifications are peppered throughout the piece, the best of which arrive in the third act: Leonard Nimoy's Spock expressing a kinship with the terminally unhappy machine they're investigating or James Doohan's Scotty patiently explaining that - on Kirk's orders - the ship's engine are being primed for self-destruct, a wrinkle that adds an extra layer of tension to the meeting with V'Ger.
Obviously though, given how far removed from the original production this director's cut is, the majority of the attention the film receives is presentation based. Colour is corrected from the pallid countenance of the theatrical presentation to a more healthy hue while the film's soundtrack has been re-arranged to benefit Dolby Atmos equipment. This spatial audio allows the bleeps and blops of the Enterprise consoles to take on an almost symphonic quality that, at times, envelops the increasingly stunned crew. The photographical imperfections present in many special effects shots, thankfully, remain charmingly obvious and unchanged in this 2022 cut while the brand new CG shots, although not completely imperceptible, are often conceptually closer to the kind of work that Rafael Segnini is producing for his Kyojuu Tokusou Juspion web-series. It's an approach that sees computer effects used specifically to imitate the magical heft of miniature or puppetry special effects, rather than the physics-based sims modern movie goers have been trained to appreciate. A shot of the Enterprise docking with the living machine that sits at the centre of the V'Ger dreadnought is therefore designed to simulate two scale models knitting together in a cavernous studio setting rather than a more realistic collision between two massive interstellar objects.
Posted by Chris Ready at 20:58:00 0 comments 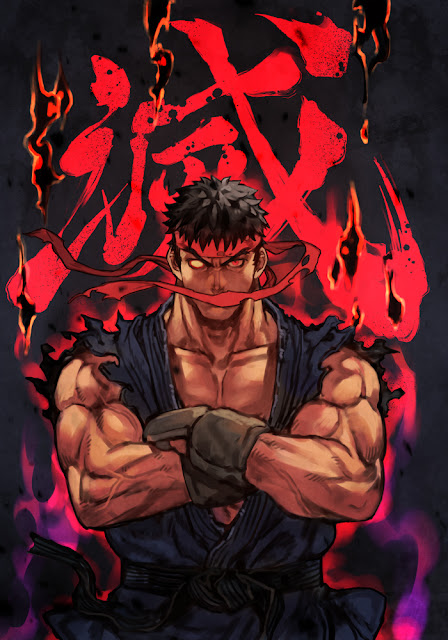