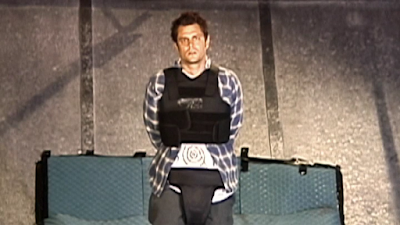 Despite a move to big screen projection, the vast majority of Jackass: The Movie has a home video quality to it. Rather than use the inflated budget - when compared to the television series - to stage complicated, locked-down skits, this feature-length experience is made up of planned affronts to the social contract and off-the-cuff incidents captured on shaky DV by the usual documentarians. Really, the biggest indicator of an expanded budget are the brief asides in Japan, sprinkled throughout the runtime. Jackass: The Movie then preserves the mutant identity minted when an MTV executive looked at several separate skateboarding videos - most notably Big Brother magazines' Number 2 and Bam Margera and Brandon DiCamillo's CKY travelogue / prank shorts - and commissioned their own cheap, slapstick, show exploring the apparent invincibility of the young, white, American male.
As well as recycling gags from these previous pieces - The Movie opens with Big Brother import Johnny Knoxville leading us through a stockcar pile-up that has roots in the rental car incident from the second CKY tape - this theatrical adaptation maintains, and is indeed structured to showcase, the peculiarities of this jumbled-up friendship group. Jackass: The Movie provides a safe, solvent, space for these young men to strip off and explore their physical limits. The pranks themselves either track into the surreal intruding upon humdrum reality or the immediate repercussions of a scatological outrage. Occasionally though, these longform bits muster up a sustained level of discomfort rather than, simply, the rush of injury. Bam Margera is usually the ringleader for these hassles - his parents (and their mansion) a frequent, impotent, target of an animosity that is never reciprocated.
Similarly, the now sadly departed Ryan Dunn is consistently faced with assignments apparently designed to either broadly humiliate him or specifically attack his masculinity. Whereas Knoxville - the gonzo star - is booked to go the distance against heavyweight boxer Butterbean, in Ass Kicked by Girl Dunn is dressed in a sports bra and tasked with defending himself from the no-less-dangerous champion kickboxer Naoko Kumagai. As blows fly Dunn's way, the rest of the gang laugh and heckle his failing attempts to guard his head. Dunn is also the central participant for the finale. For an audience - popping in and out of his hotel room - Dunn lubes a condom containing a toy car then inserts it into himself before heading off to a private hospital for an x-ray. The stunt requires a wearily explained fiction to action its outcome; Dunn questioning along the way if his willingness to participate in this particular segment makes him a man in the eyes of his cohorts? He gets some sort of answer, later, from former flea market clown Steve-O who explains that his Dad would probably disown him if he allowed himself to be penetrated in this way. If the trials and tribulations of the group whipping boy prove too much, there's always the skit where Knoxville dresses up as Bill Murray from Caddyshack and blasts increasingly irate golfers with an air horn.
Posted by Chris Ready at 22:36:00