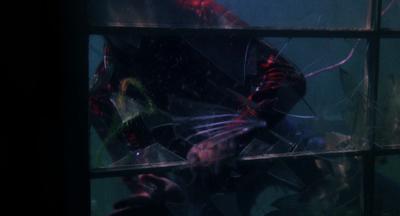 Paced to express the mounting sense of anxiety felt by the film's lead couple, Joe Dante's Piranha starts out leisurely, bordering on sluggish, before slowly building to full-on, adrenal mania. Heather Menzies plays Maggie McKeown, a spunky skiptracer hot on the trail of two teenagers who skinny-dipped in the wrong pool. Along the way she recruits Bradford Dillman's topped-up drunk Paul to help investigate the disappearance. The pair stumble on a semi-abandoned military research tank (the kind that holds water) which they promptly, thoughtlessly, drain. Unfortunately, this bone-clogged cauldron housed a strain of super aggressive, selectively bred, piranha, able to survive in the cold, local waters.

After a couple of run-ins with the film's buzzing, agitated shoals, Maggie and Paul abandon their emerging relationship to arrive at a state of total, propulsive motion. This unceasing advance hits a peak 79 minutes into the film - editors Dante and Mark Goldblatt assemble a short, delirious sequence that mixes on-water stunt falls; a speedboat crashing through a smaller vessel (and the subsequent explosion); massing, carnivorous fish and, finally, our heroes launching themselves into space in a stolen, slow-motion police car. Dante's film may be slight in terms of storytelling - a quickly produced cash-in hoping to ride Jaws' wake - but it's assembled in a way that extracts maximum impact out of its (comparatively) meagre budget. The Piranha attacks manage to be both protracted and frenzied. The film's micro maulings communicated with churning, underwater collages that knit together images of teeth, injury and clouding, dilute blood.
Posted by Chris Ready at 10:23:00