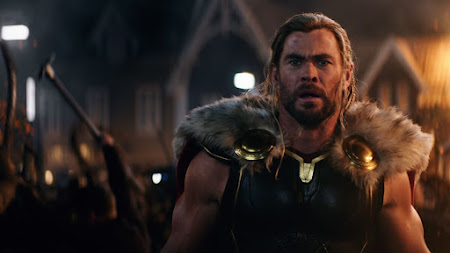 Star quality can be difficult to define. What is it that makes an actor appealing in a way that goes beyond the deliberately simplistic confines of brand-first filmmaking? Is above-the-title billing even a consideration that can be applied to the modern Marvel machine? Since Robert Downey Jr's departure there seems to have been a concerted effort to tidy away the idea of a bankable, middle-aged, leading man. The unending Disney slate preferring, instead, to offer up a hyper-caffeinated production line of poppy neophytes - a sort of The Mickey Mouse Club for big-screen action cinema. Whatever the desired destination, Taika Waititi's Thor: Love and Thunder presents an interesting case study in silver screen allure not 10 minutes into its runtime. We get a Chris-off: Chris Pratt versus Chris Hemsworth. Pratt, recently seen in the excretable Jurassic World Dominion and a veteran of several streaming-only also-rans, seems better able to communicate the snappy (and increasingly dull) impatience that underlines the majority of the interactions in this four colour universe - he's a living embodiment of Joss Whedon-style scripting then. Pratt offering himself up as a mouthpiece for the frustrated point-scoring that has, undoubtedly, burrowed itself deep into the series' DNA - a tick that refuses to be dislodged.
Chris Hemsworth does something completely different. There's very little sense that he's concerned with seeming cool or even credible within this specific Summer blockbuster context. It's not even that he's behaving above the material, he's simply apart from the myth-making we've been trained to expect from the live action Disney floppies. With that in mind, Hemsworth's performance as the oblivious himbo secretary in Ghostbusters: Answer the Call seems to have become the actor's calling card. Hemsworth, likely recruited for that film because of his then-recent Marvel ascension, revealed a genuine instinct for absurdist comedy; one that seems to be completely at odds with his muscular movie star looks. If anything his fluency in pure nonsense adds an extra layer of bafflement to his strapping performances. Watching Love and Thunder, it was difficult to not be constantly reminded of Terry Jones and Terry Gilliam's post-Monty Python projects - Ripping Yarns or Erik the Viking; Time Bandits or The Adventures of Baron Munchausen - pieces in which expensive spectacle operates as a sight gag rather than an invitation to gasp. Collectively, these works all revolve around deluded maniacs who, it is eventually revealed, have their heart in the right place. At this point, Hemsworth's Thor has had his peculiarities exploded. The odd farcical aside has become the totality of this character. Broadly, Hemsworth's Thor is an invincible superhero who combines the moulded physique of Arnold Schwarzenegger with the good-natured psychosis of a Michael Palin.
Posted by Chris Ready at 22:32:00