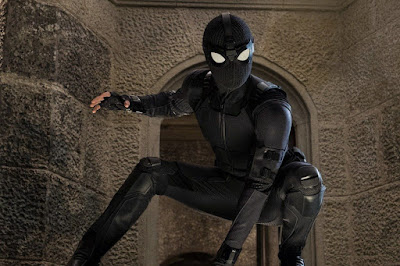 Twenty-odd films in, the Marvel Cinematic Universe largely functions as an on-going, episodic serial rather than a collection of distinct, individual pieces. Characters are seemingly allowed one film to set their stage before the demands of a wider playing field bleed into their space, polluting their identity. Case in point, Spider-Man: Far From Home, a film that uses a loose, poppy superhero-on-holiday structure to definitively paint over the incalculable trauma of Thanos' snap while simultaneously wallowing in the departure of Robert Downey Jr. Stark's shadow is such that the very idea of Peter Parker as a sweet, working-class prodigy is obliterated. This Parker is an heir, fumbling his way around with a fantastical pair of DITA sunglasses that constitute his terrible, unmanned combat vehicle inheritance.

Convoluted and episodic, Far From Home simulates that stale comics standby, the Summer Special. It's a bumper compendium of half-baked ideas and sketches not fit for general consumption; all the odds and ends lumped together in one volume with very little care for tonal or creative consistency. In terms of the intrusive Marvel bookkeeping and SHIELD autophagia, consider those encroachments trace crossover, the storytelling equivalent of some particularly nasty background radiation requiring extended stretches of corporately mandated attention. What makes Far From Home all the more frustrating is that there are blips of purchase here and there. Moments that threaten to arrest interest before they're lost in the churn of droned-out entitlement.

Aunt May hurling bananas at her nonplussed nephew, not to mention Peter's general anxiety about his so-called 'tingle', seems to suggest that Parker is losing touch with his innate spider-skills by focusing so heavily on Stark's endowment. As it is, the idea exists as a proposition and a tumbling, back-flipping conclusion embedded within the finale. The pain of this disconnection is never mapped out, we aren't given the opportunity to understand Peter's apparent disassociation. This tidiness extends out into the film, denying the human level conflicts the rough interactions they require: Peter's best friend Ned is enjoying a holiday romance, so he can't possibly feel ignored. Mary Jane definitively rejects a handsome rival suitor, meaning Peter doesn't have to spread himself thin to grasp at a private life.

Emotionally, at least in terms of interpersonal relationships, Jon Watts' film is chronically neat, leaving all sense of self-shredding conflict to the special effects realm. It is to Far From Home's credit that visual effects house Framestore, channelled through Jake Gyllenhaal's artistically precious performance as Mysterio, deliver an incredible illusory sequence that hammers Spider-Man with images and situations in which he is either specifically powerless or, if he manages to react quickly enough, simply hurling his body weight against unyielding phantasms. Regardless, Parker is being mocked, forced to respond to immediate, confusing visual and audio data. Framestore use shattering mirrors and the dense choke of poisonous green smoke to suggest the swirling anxieties that underline the best of Spider-Man co-creator Steve Ditko's work. These apparitions strip Peter of his Iron Lad exterior, forcing him to contend with his beginnings as a child in a personalised hoodie. Unfortunately this ordeal does not track into Parker re-examining his methodology, the teenager is quickly aboard a Stark branded VTOL jet using the billionaire's impossible-tech to manufacture a toyetic costume change.
Posted by Chris Ready at 09:56:00