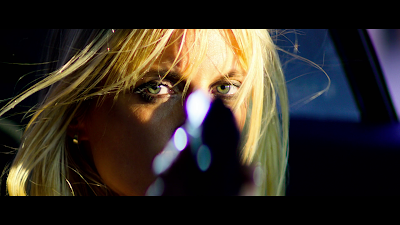 As chaotic as Michael Bay's Transformers films are, there is some level of restraint. Metal titans may blithely crash through intercity coaches but the viewer isn't asked to consider the human cost. Any passengers the bus may or may not have been carrying will always become instantly absent, leaving only gutted, rolling wreckage in the robot's wake. In this way Bay's alien action films keep their transformer-on-people violence at the level of toyetic collision; flaming stunt rolls that speak to expense and skill rather than auto-vehicular terror. 6 Underground displays no such moderation. The car chase through Florence that opens the film betrays an exhilarating contempt for human life.

SUVs batter through crowds, crushing people, market bric-a-brac and even historical art before the vehicles are flipped then torn apart, arriving an inch from the camera heaving with pulverised, extinguished, meat. This may seem like a small, cosmetic correction but, when considered within Bay's wider oeuvre, it removes a contradiction that has kept the director's work registering at the crass, recruitment ad end of the commercial scale. 6 Underground, set up at Netflix to tempt browsing subscribers rather than any particular night-out crowd, doesn't need to undersell its carnage to capture a specific rating. Bay is therefore allowed to indulge his ugly fascination with deanimated bodies.

Frankly, it's a creative wavelength that works perfectly for Bay, a director who otherwise completely fails to convince his audience that he cares about anybody but those who wield the loudest, meanest voice. 6 Underground's vigilantes are Bay's trademark group of expert monkeys - the screeching, scratching, human panic attacks best able to barrel through Bay's kaleidoscopic catastrophes. Paul Wernick and Rhett Reese's screenplay builds an underlining sense of interpersonal apathy that, while overcome to provide an easily recognisable arc, lingers like background radiation. The logistics required to make viewers believe that Ryan Reynolds (snark incarnate, as always) and, by extension, Michael Bay, care about their billionaire black ops missions beyond pricky personal vendettas or an opportunity to play with some new rigs seem insurmountable. To 6 Underground's credit, it doesn't even try.
Posted by Chris Ready at 11:20:00