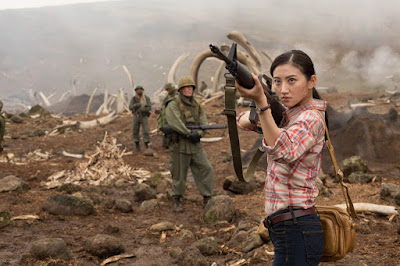 In stark contrast to Peter Jackson's pointedly romantic take on the monster, Jordan Vogt-Roberts' Kong: Skull Island finds the Eighth Wonder of the World serving as a protector God on an island teeming with violent, scurrying beasts. Kong is presented as weary, an assailed figure who roams incessantly. He might be happy to live in harmony with the mute human tribe that share his island but he's also constantly having to defend his throne from a variety of oozing pretenders.

Past Kong films have focused on the kind of chaos inherent to these towering primates - how can mankind hope to co-exist with this wonderful thing? With zero way to communicate, the bustling, puny humans fall into cowed, passive-aggressive patterns, hoping to either appease or tranquillise their Kongs. Blondes are offered up; food tributes are loaded with sedatives. These great apes are organised as affronts that mankind must conquer then tame. Skull Island diverges from this model, there's a franchise or two up for grabs after all. John Goodman and Samuel L Jackson's ragtag landing party aren't here to capture the massive gorilla, their only task is to marvel at his strength and survive in his presence.

The Kong we see here may be ferociously territorial but he's also heroic. A name creature big enough to score his own standalone feature before Legendary Pictures thunder on towards their own version of Ishiro Honda's Destroy All Monsters. In Vogt-Roberts' film Kong isn't a tragic suitor doomed to fall (Brie Larson's photographer barely turns his head), he's a potential ally showing off his exciting, prop-assisted move-set. Skull Island doesn't just dwell on this monster mashing either. Like Honda before him, Vogt-Roberts uses his titans to tell broader stories about clashing global ideologies. When John C Reilly's shipwrecked World War II fighter pilot attempts to puzzle through the proxy war politics that have landed in his lap he does so by drawing parallels between Kong and the Soviet Union. Both, he reasons, are powers to be respected rather than pointlessly engaged.
Posted by Chris Ready at 22:47:00 0 comments

Transformers vs GI Joe: The Movie Adaptation by Tom Scioli 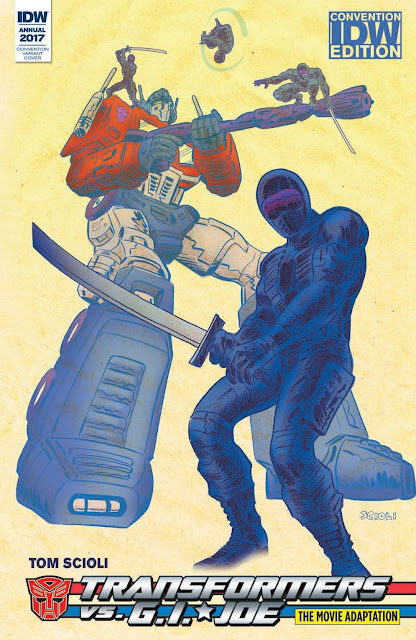 In the market for a scrolling beat 'em for up for a dead and buried 16-bit system? Watermelon Games got you covered! Paprium is a gorgeous looking post-apocalyptic brawler in the Streets of Rage vein; a title so monumentally massive that it needs an 80 Megabit cartridge (that's twice as much space as Capcom's Super Street Fighter II conversion took up) to contain its majesty. Hell of a trailer too, Body Hammer era Shinya Tsukamoto, eat your fucking heart out.
Posted by Chris Ready at 21:01:00 0 comments 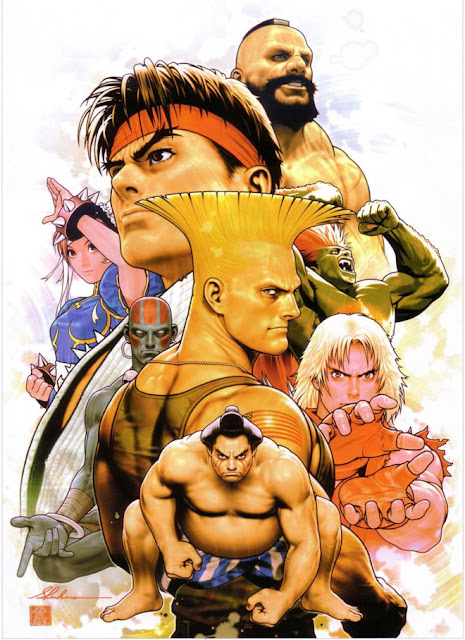 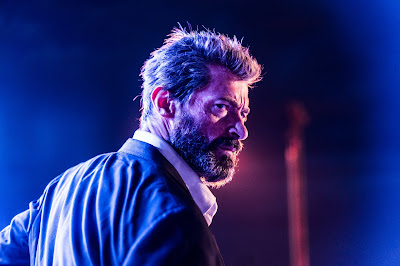 Setting aside the frontier westerns that writer-director James Mangold explicitly invokes, it's easy to draw parallels between Logan and the Lone Wolf and Cub films. Apart from the most obvious point of comparison - an ageing eviscerator travelling with an equally dangerous child - both frame their tales against countries eating themselves alive. Like Tokugawa era Japan, the Americas seen in Logan are focused around the spaces where civilisation has broken and retreated. An age has passed and we are trapped in a bleak, transitory era.

An indefatigable Wolverine spends every waking moment driving a limo to break even while landowners posse up to act like feudal barons, eager to exercise their power of life and death. There's no sense of a rigid, overarching force of law, just scattered, sometimes mechanised clans acting with impunity. The United States is depicted as corrupt and diseased, a condition reflected in both the film's heroes and villains. Regardless of allegiance these beings are all either augmented or outright sedated.

People are reduced to the level of meat, their flesh farmed and catalogued for a purely utilitarian idea of imitation. Bodies are simply currency to be broken down and used up by the state. The villains of the piece, The Reavers, are a group of mutant hating assassins usually drawn tangling with The X-Men or The Punisher, their looks hovering somewhere on the splatterpunk spectrum. Here they are depicted as private military surplus, veterans chewed up by some distant war now earning consultancy money committing war crimes in their home country. Their bulky cybernetic limbs designed to stress not maniacal customisation but instead the pressing need to replace that which an IED has obliterated.

Logan then is the first Wolverine film arranged around the bodily trauma inherent to the character's super identity. He's built to be hurt, an atypically invincible target for assorted adversaries to impotently expel against. In Logan, the title character is no longer particularly exceptional. Aside from the photostat characters that share his powers, even standard enemies have access to technology that allows them to circumvent apparently permanent damage. The extraordinary has been rendered routine. In response, Wolverine moulders.

Previous Wolverine films have dealt with the character as a constant battling against the bitterness and jealousy that has sprung up in response to his existence. Likewise, the majority of X-Men films depict Wolverine as a hesitant, airtight personality. X-Men: First Class even went so far as to have our hairy hero pointedly sitting out the entire adventure just to get drunk in a bar. This unkillable man has been built to wander, never quite putting down roots. Logan flips those ideas, forcing stakes and a sense of permanence on the perennial drifter and his uncompromised sense of identity.

Wolverine's DNA has been decoded and replicated, resulting in two distinct approaches to the idea of a clone. This offspring, and the conflict they bring, are presented as personifications of the tension that exists between hereditary and environmental influences on the individual. Dafne Keen's Laura / X-23 is Wolverine as a child, a blank slate that offers the opportunity to chart a more emotionally stable personality. Laura is her parent stripped of the crushing weight of experience. She's young enough to still be killing as a reflex but also idealistic enough to still desire the company of a pack.

Lone Wolf and Cub resurfaces again in how Wolverine relates to his child. Like Daigoro, Laura is often treated as extension of the parent, an extraneous limb that is trusted to look after itself. When Ogami Itto abandons his son to the winds it's alien but instructive, the fatalism that pulses through Bushido presented as a terrifying power play. When Wolverine leaves Laura to fend for herself it's because he doesn't want the hassle - his deep self-loathing has finally acquired an external target.

Laura is fresh and new, she represents change. If Wolverine is to accept her as his daughter then he will also have to adjust his behaviour, a difficult proposition for a being whose life is built on violent repetition. Patrick Stewart's decrepit Xavier is happy to break his holding pattern though, eager to take on a new charge and help her grow as a person. The centuries old beast man would prefer a slow, tranquillised slide into obsolescence. As First Class demonstrated, it's just easier for him.

Wolverine's other child is an abomination. X-24 is Hugh Jackman's Men's Health body frozen in the moment it reached peak shred. 24 represents the soulless replication of a production line, Weapon X as the obedient, heavily medicated drone he was originally built to be. This is a Wolverine only able to express the most base aspect of his personality - rage. Set against the depressed, dying source, 24 register as a manifestation of the passions that have died, or at the very least curdled, inside The Wolverine.

Logan's insistence that 24 should remain this one-note shade is the film's most obvious failing. Despite Logan's midcard fight being built around a situation and setting that explicitly recalls Universal Soldier and its John Hyams directed sequels, Mangold is content to treat the character as an extrinsic obstacle rather than a fresh facsimile looking to violently explore, then depose his failing originator. 24 has no motor, he's an automaton stuck functioning as a mythic aggressor rather than a separate, interesting character in his own right. None of that disappointment lingers too long though, because in the homestretch we're given the sights and sounds of a wounded, bloodthirsty beast and his rampaging cub singing at each other across unfamiliar territory. Their howling an expression of the pure joy they are both about to find in slaughter.
Posted by Chris Ready at 21:40:00 0 comments 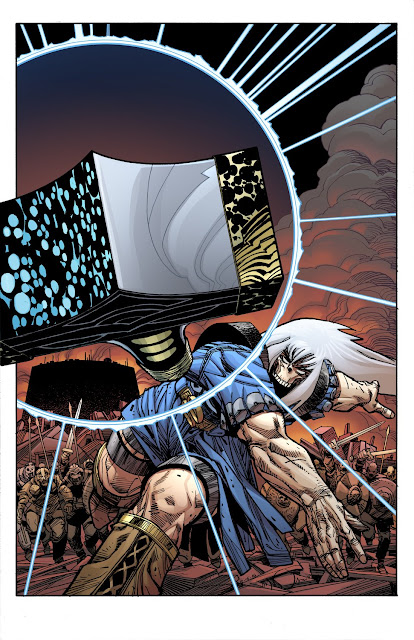 Beats International - Dub Be Good to Me