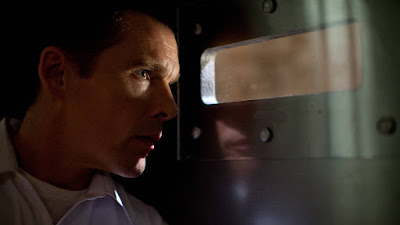 The United States, as seen in The Purge, has undergone a soft coup, now governed by a group of blood-thirsty braggarts calling themselves The New Founding Fathers. Although details are sketchy, since the central premise is really only an excuse to stage a siege, this new ruling party have seized upon a Peruvian community festival as a way to both hold onto power while also expunging the populace of its grumbles. Takanakuy centres around hand-to-hand straighteners to settle grievances and determine social standing. The American expression naturally skews more homicidal, involving the suspension of all police and emergency services for a 12 hour period in which citizens can pretty much do whatever the fuck they want.

Writer-director James DeMonaco has a great premise on his hands but is content to use it simply for scaffolding. Indeed a lot of The Purge's most interesting ideas are abandoned to talk radio detailing. This America survives thanks to a bubble economy centred around personal and architectural self-defence. Presumably everyone spends the year either preparing for (or recovering from) The Purge. Ethan Hawke's financially secure James Sandin enjoys the benefits of this system. He has made his family's fortune outfitting his jealous, gated community neighbours with state-of-the-art safety features. Sandin is passive though, reluctant to really engage with The Purge as anything other than a way to get himself a sailing boat.

DeMonaco never holds Sandin to account for his profiteering, instead writing him as someone on the used car salesman spectrum who has to tap into his inner cowboy to protect his homestead. In terms of familial interpersonal drama, Sandin is unusually reasonable too. He's interested in his children's lives, no matter how much they pout about it. Lena Headey's Mary isn't obviously bored or resentful either. There are no extramarital affairs looming on the horizon. The Sandins are humdrum. DeMonaco doesn't use The Purge as a device that has already warped his character's moral or ethical perspectives. Although apparently long established, the state-sponsored cull is treated as a new danger that will force the family to make tough decisions, tonight. This is the film's biggest problem - DeMonaco's characters react to events as fresh rather than established circumstances. The Purge reassuring its audience when it should be puncturing them.
Posted by Chris Ready at 14:06:00