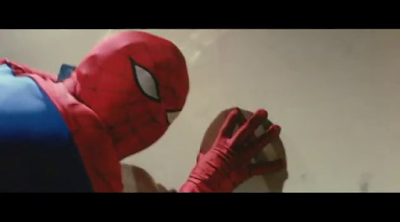 Far from feature length, Koichi Takemoto's big screened Spider-Man: The Movie is essentially a 24 minute episode of Toei's webslinger TV series shot in (or masked for) widescreen. The short length means this Spider-Man's story beats are aggressive and elliptical; frame work is thrown up with blasting expediency, their images designed to linger like radiation. The fun here is in how Toei translate Marvel's superhero and his powers. Instead of bookish nerd Peter Parker we have Takuya Yamashiro (played by Shinji Todo), a motorcycle tough with a girlfriend and two siblings. Spider-Man's powers, gymnastics aside, are technological, including a wrist computer and an enormous space-craft capable of expelling dragsters or transforming into a sword-wielding super robot.

Although the film eventually reverts to type, throwing up titanic (but barely interactive) battles between spider-machinery and a torpedo-spewing monster-of-the-week, there's a lot of action in this Spider-Man that's refreshingly assailed. On his way to the film's comparatively rote finale, Todo's webhead clambers and scutters around like a genuine house pest, avoiding kicks and stabs from a swarm of grey generics. Spider-Man even gets to embrace the unconventional warfare tactics of Ninjutsu, substituting himself for gunfire-drawing duplicates or that Kawarimi classic, a block of wood. The fun peaks with a sequence straight out of Shaft's Big Score! - Spider-Man and his gassed Interpol buddy are pursued along a flat, featureless vacant lot, buzzed by a hovering helicopter. A hunched Todo darts about, attracting attention while a cross-eyed grunt hangs out of the chopper, blazing away with a flash-paper machine gun.
Posted by Chris Ready at 17:59:00