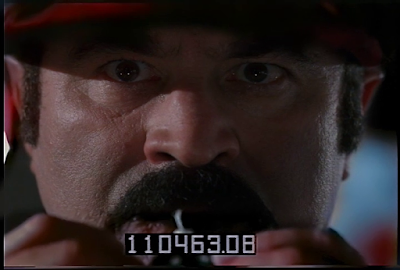 Released to the Internet Archive in an interim edit that splices together an open matte VHS with a one-of-a-kind cassette containing an earlier, baggier, edit of the film, Super Mario Bros. - The Morton Jankel Cut proposes, by dint of existing, a rejuvenation for this notoriously troubled production. Liberated from the estate of producer Roland Joffé, this interlaced assembly runs twenty minutes longer than the film as originally screened, offering (at best) trace elements of directors Annabel Jankel and Rocky Morton's initial, more overtly dystopian, vision. Massaged to a legibility appropriate for the video tape rental era by Garrett Gilchrist, a professional artist and illustrator with a gift for film restoration, these timecoded additions offer punctuation rather than axis. They provide clarification at a detail, rather than conceptual, level.
Almost unbearably dull, especially in its latter half, this longer Super Mario Bros delivers a brief fizz of ideas and lopsided imagery - particularly when considering the ways in which the film's central, dinosaur-derived, metropolis differs from our own world - then tanks itself with a plot that bumbles back-and-forth, never quite engaging. Like Highlander II: The Quickening before it, Mario Bros is world-class production design in search of a story, or even a consistent tone, to anchor it. The film is physically built around the strangeness of a technological society created by cold-blooded lizards rather than tribal mammals. Muggings are rife in this pollution-choked city. Brightly coloured pedestrians crash into each other, dressed for aggression displays and loaded down with weapons designed to jolt anyone who strays too close. Commuters, packed into sparking dodgems, rush around in an unheeding, almost suicidal, rush.
Bob Hoskins and John Leguizamo make for a charming pair of dunderheads, especially in early scenes where the two actors are allowed the space to react to bizarre circumstances rather than tedious plotting. Hoskins, on occasion, even summons up the same righteous, barking, frustration that underpinned his brilliant comedic performance as Eddie Valiant in Who Framed Roger Rabbit. The film's most exciting sequence sees the Mario brothers picked up then processed by the fascist, gun-obsessed, stormtroopers that pass for police in this universe. Fleeing in a squad car so absurdly souped-up that it requires arresting gear to park, a blood-boiled Mario Mario crashes around the city's highways, using the vehicle's bulldozer blade to overturn incoming traffic. The sequence isn't just successful because it transforms a future shocked joyride into a destruction derby, it's also the only time that the film's madcap plotting, ace visual design, and pre-release deletions coalesce into something purely entertaining.
Posted by Chris Ready at 20:28:00