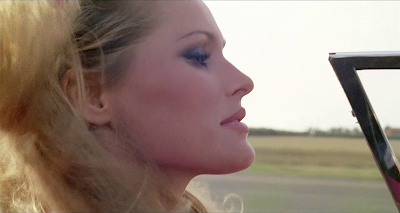 Elio Petri's The 10th Victim is a louche, rambling, take on The Most Dangerous Game that sidelines the pursuit, and any specific murder machinations, to gab around the idea of a world where killing is not only legal but commercially and ideologically encouraged. 10th Victim takes place in a society where war - and really any human desire to commit violence - has been successfully subsumed into The Big Hunt, a worldwide game of tick in which volunteers take it in turns to track then be tracked. Should contestants score themselves a specific number of kills then they will get a parade thrown in their honour and never have to pay income tax again. Naturally, this contest doesn't just keep international relations simmering along nicely, it is also the world's number one source of entertainment, allowing players to cherry pick all sorts of lucrative sponsorship deals.
Marcello Mastroianni plays Poletti, a down-on-his-luck victim who has had all his previous winnings spent by his ex-wife Lidia (Luce Bonifassy), and his mistress Olga (Elsa Martinelli). Ursula Andress is Marcello's hunter, Caroline Meredith, a highly successful contestant looking to make the most of her final (pre-parade) kill by staging a perfect, ad revenue friendly, execution. Caroline's hit is poised to be the centrepiece of a variety show bankrolled by the Ming Tea Company, an American outfit that trades in wonky racial stereotypes and hopes to attach its branding to a moment of triumphant butchery. Caroline just needs to corner the breezy Italian bachelor. Although hardly revelatory in terms of plotting or the ways in which it designs tension, 10th Victim instead delights in its detailing. Roman gladiators clash under jaundiced spotlights for a bored mod audience; ageing parents are locked away in secret mansion rooms, lest they be euthanised by the over-eager state; and, best of all, Big Hunters may well be able to gun down their victims in broad daylight but, if they abandon their car whilst giving chase, they must still suffer a parking ticket from a finger-wagging traffic warden.
Posted by Chris Ready at 17:54:00