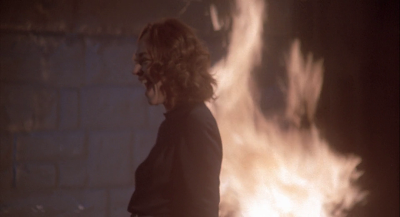 Closer to a loosely connected succession of suspense sketches than a rigid narrative, Dario Argento's Inferno is organised around the sensation of imminent, intrusive danger. The plot is a series of discoveries - each of the film's potential victims inadvertently offending hidden, Satanic, societies simply by obtaining the knowledge that they exist. In each instance, this peril is terrifyingly close to the everyday. Spaces and rooms that run parallel with sleepy apartment buildings or libraries actually house incomprehensible, otherworldly monstrosities. Reality in Inferno then is literally permeable, an easily broken membrane that bursts at the merest prod, revealing the scabs and rot that lie beneath.

Since Inferno is designed around this idea of trespass, Argento builds his film out of incidents in which a character dawdles somewhere they shouldn't be. These people are depicted as innocents, the guileless placeholders of fairy tale, children who put themselves in situations they simply cannot understand. Argento magnifies the minutiae within these sequences to such a degree that, slowly, everything onscreen begins to register as either potentially dangerous or outright alarming. Romano Albani's powdery, impressionistic lighting seems to denote a supernatural force beaming into this world while basic reverse shots take on the quality of a gaze - we feel something withering and hateful staring back at our oblivious adventurers.

Everything in the frame feels, not just authored, but agitating. Personal effects like keys weigh the curious down, their aural presence mutating from a disconnected jangle to the shuddering, submerged peal of a death knell. This sense of impending doom is everywhere in Inferno. The terrors that Irene Miracle and Leigh McCloskey's siblings invite often feel, in the context of this crumbling dollhouse world, corrective - an established power batting away those who would attempt to reveal their existence. This omniscient counteraction can arrive at any time. Detached hands streak into the frame, striking at those who would push the piece towards its conclusion. At these times it seems as if the film itself has come alive, the wrathful celluloid turning in on its subjects, clawing and stabbing until its captives cease their mindless procession.
Posted by Chris Ready at 13:59:00