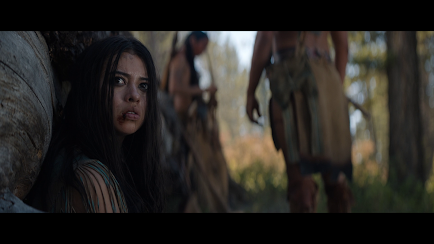 Director Dan Trachtenberg and screenwriter Patrick Aison have worked a minor miracle with Prey. The duo have managed to produce a concept so strong that it works against the received (but failing) wisdom of how to conceptualise and plot a sequel, especially one with such obvious brand recognition. To wit: go bigger and bigger, at the expense of reason. The Predator series has always stumbled and bumbled around when attempting to expand its scope beyond John McTiernan's masterful but deliberately self-contained first instalment. Although Predator 2 seethes with an agitated, even radioactive, energy, further episodes strayed further and further away from the central idea of a single invisible monster stalking a shrinking team of maniacs. In one sense the first Predator is an ultra-masculine variation on Alien - a muscular appropriation of the same tick 'em off formula that trades oily decks for a green inferno; grumbling refinery workers for a well-equipped CIA death squad.
In Prey, the extra-terrestrial chasseur is stalking The Great Plains, its presence in the 18th century reported in brief asides that recall the passively observed methodology of Arnold Schwarzenegger's cyborg in The Terminator. While McTiernan's creature was a ghostly presence, prodding at the soldiers it was tailing before going as far as actually attacking them, Trachtenberg's is locked into its own little sub-adventure. Although occasionally glimpsed by Amber Midthunder's Naru, a young Comanche woman who'd rather hunt than gather, this Predator is often alone, collecting trinkets and slowly working its way up the area's food chain. Dane DiLiegro's invader uses it's reflective camouflage to flaunt a proximity to the other animals that feast upon their physical inferiors. Trachtenberg's film, both in terms of incident and the dialogue screamed by dying men, plays up the villainous qualities of this Predator. It is a cheat. A massive firepower advantage isn't enough for this monster, instead it delights in striking at its victims while completely concealed, only decloaking when there's an enormous power discrepancy.
Trachtenberg and Aison formulate their conclusion around this mix of arrogance and cowardice. Their hero, Naru, has enjoyed a certain proximity to this creature that has allowed her to decode its technology and techniques. In these situations Naru has, more often than not, played the role of quarry to the bigger game this Predator is actually poaching. She isn't viewed as a threat and is therefore irrelevant to the heat vision hunter. An early scene in which the Predator inadvertently gives a cottontail rabbit a reprieve by killing the wolf that was stalking it establishes that this alien has a blind spot, one that the physically smaller Naru can comfortably occupy. This advantage is compounded by Naru's intellectual acumen - just as she isn't constrained by the gender role that has been assigned to her by her family and society, she isn't limited by the position she hopes to grow into either. The Comanche men she brushes shoulders with have tried and trusted weapons that they rely upon - not unlike the Predator. Naru, when sensing the limitations inherent to her equipment, customises hers and transforms their utility. Naru then practices until she is fluent with these contraptions. Threaded throughout Prey is this idea that overwhelming physical strength limits those who possess it. The reliance on this power reveals an unwillingness to adapt; a desire to respond to every question with the same, mocking, answer.
Posted by Chris Ready at 23:39:00