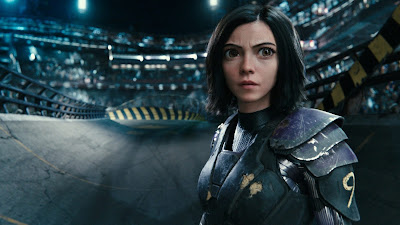 Despite the decision to swerve away from the suicidal splatterpunk of Yukito Kishiro's original manga, Robert Rodriguez's Alita: Battle Angel stands out from the superhero crowd thanks to a gleefully confrontational title character and a structural framework that doesn't feel the need to position her desires in terms of higher, altruistic goals. This Hyper Future Vision keeps things personal. Rosa Salazar's Alita is the jet engine that powers James Cameron and Laeta Kalogridis' writing, a personality so powerful that the diversions and setbacks usually trotted out to frustrate a hero's progress are, here, easily surmounted.

This is partly a knock-on effect of abridgement. Cameron and Kalogridis' screenplay pulls in material from several successive volumes of Kishiro's work, chopping and changing characters and situations to the point where the film is closer to an expanded adaptation of Hiroshi Fukutomi's 1993 home video telling than Kishiro's originator text. Alita's decisions are often binary, she either loves people or she hates them, reacting accordingly. This simplicity of purpose allows the filmmakers to constantly push at events that might otherwise inspire pause or reflection, then smash through them, off to the next adventure. That the film never feels so nakedly mercenary is thanks to Salazar's passionate, luminous performance.

Found in what amounts to heaven's landfill, Alita begins the film as a nameless trunk, lost in a sea of trash. Her remains are found by Christoph Waltz's Dr Ido, a cybernetics doctor on the hunt for freebies to use in his community clinic. The good doctor's decision to not immediately cannibalise her body for spare parts or monetary remuneration speaks to an innate goodness, which then helps to massage the faintly desperate relationship he goes on to presume. After discovering that her brain is still intact, Ido marries the shattered carcass to an ornate, delicate body he originally designed for his sick daughter. Ido assumes a fatherly role, gifting his new charge the name of his dead child as well as her futuristic frame.

Key to the idea of Alita, the character, is that she never actually feels threatened. Despite her amnesia, Alita still possesses a built-in confidence that she can deal with, basically, anything. Ido may both physically and mentally position her as a baby in need of protection, but the idea doesn't even occur to her. While Ido's assumption of a fatherly role isn't rejected outright, Alita makes him work for the title. As with Cameron's earlier film Aliens, names like father and mother carry a heavier weight than anything simply circumstantial. It's a rank you achieve. So while Alita is grateful for her rescue from oblivion she doesn't let the emotion render her subservient. Neither does she let it cloud her instincts when she hears about a series of gruesome murders and see's Ido dressed suspiciously, sneaking about at night. Her intent isn't merely investigation either, she clearly aims to stop this speculative murderer too.

Alita's first body, which we come to understand in terms of physical limitation, is small, childlike. The clothes Ido gives her are bright and poppy. Given that the doctor has some familiarity with her internal mechanics, perhaps he seeks to divert her attention, to saddle her with a borrowed vessel, steering her away from the conflict she craves? Alita's second body, an intergalactic suit of armour that she carries out of a lake, forces Ido to accept her as she is, not as he wants her to be. The film doesn't ask us to mourn Ido's idea of a replacement daughter either, it's too busy delighting in Alita's fibre optic gymnastics. Battle Angel's biggest departure from Kishiro's text then, and indeed cyberpunk as a genre that interrogates fracturing identities, is that Alita is already emotionally complete and thrusting forwards.

The memories that bubble up in moments of crisis, while intriguing, are treated as curiosities, their weight transitional rather than debilitating. They occupy a separate time and emotional space, one that may fill in some details but will not dictate the current objective. Alita is far more concerned with the present. Unlike her milquetoast, arm-jacking boyfriend Hugo, Alita's wants aren't material, they're interpersonal. Her emotions are raw, terrifying even. A scene in which she opens up her chest and pulls out her heart to underline her investment in a relationship is discussed within the film as alarming. Alita embraces her power and, frankly, delights in violence. We hear her thinking over her cool lines before she delivers them - subconscious memories or purpose that arrive inside specific, heightened instants. She won't allow them to dissipate. Alita's journey does not chronicle circuitous internal discovery, it's about the external realisation of a core, personal ideal. Decisions are discussed and interpreted as physical data then translated into blistering action.
Posted by Chris Ready at 16:14:00