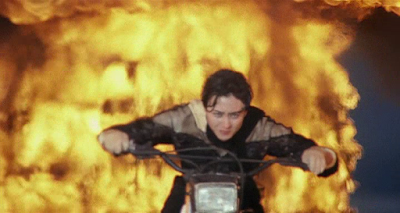 One sister in particular, Carina Lau's machete wielding Chia-Ling, resents Kao not just for - in her mind - stealing away a doting brother's attentions but because she believe's Kao's mixed-race heritage will dilute their pure, Chinese bloodline. These acute familial resentments peak with a teary, reprimanded Chia-Ling screeching that Kao is a nothing but a mongrel. This interpersonal distress is matched by an action model that can only be described as hysterical, taking every opportunity to accentuate even the most basic of cop thriller machinations with extreme danger. These two emotional frequencies compliment each other beautifully - threat is used to inform then adrenalise the melodrama. The doe-eyed Godenzi is the perfect pilot for this careening vehicle too, her performance a mix of understated, but frayed, emotions and explosive martial arts equalising.
Posted by Chris Ready at 22:13:00