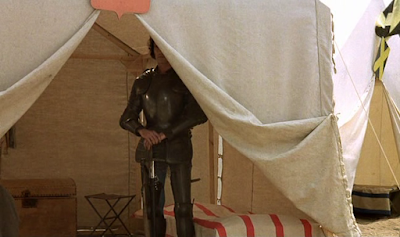 Robert Bresson's Lancelot du lac is hardly explosive but it does begin with a level of clattering action that it has no intention of returning to. Exhausted knights - struggling under the weight of their gleaming plate armour - batter each other, cleaving heads from bodies and stabbing mechanically at groins. Geysers of blood blast from these punctures; lacerations frothing up around the coverall's gaps or seeping through the freshly made dents. Bresson's take on Arthurian legend begins in the midst of cataclysmic failure. The grail knights have returned home empty handed after a long, fruitless, campaign. Sir Percival - the purehearted youth who took possession of the grail according to 12th century poet Chrétien de Troyes - isn't just absent. He has, as the opening legend informs us, completely disappeared.
Bresson portrays the remaining round table knights as listless hooligans, cursed with a deeply ingrained boorishness that ensures that this film never transitions to a state of romantic fantasy. Our brief glimpse of the grail quest is marked by a series of ruinous, and seemingly pointless, encounters that culminate in the armoured survivors thundering past a burning farmhouse and its collapsed inhabitants. Bresson and editor Germaine Artus cut back-and-forth between this pitiless outcome and a squad of polished knights, thundering along on horseback - not just responsible for this atrocity but, quite apparently, completely indifferent to it. Laura Duke Condominas' Queen Guinevere has the measure of these robotic murderers, describing how they all turned on each other when they realised their mission was failing and chiding Luc Simon's Lancelot specifically for believing that God is a transmissible power, to be seized by brutes.
Constructed to deny the visceral release of a well-mounted action sequence, Bresson consistently works against the expected building blocks of a fairy tale epic. Sieges and battles take place off-camera. A jousting tournament is abstracted to four recurring images - a musician's hands pinching and manipulating their bagpipes; standards hurrying up then crashing down a flagpole; the whirling legs of Lancelot's prize horse; and appreciative reports from the audience sat in The King's box. Momentum is directed into the floor then - we see hooves churning up a field rather than a resplendent lobster bearing down on an equally dazzling rival. It's often as if the camera cannot bear to look upon these men, adopting the eye-line dodging perspective of the brow-beaten serfs who buzz around this nobility. Literal extras who - as far as these maniacs are concerned - never quite meet the criteria of people. Even Lancelot, the rugged French knight who makes a cuckold of his dithering British King, makes threats of violence on his social inferiors, promising swift retribution should his fanciful demands not be immediately met.
Posted by Chris Ready at 23:25:00