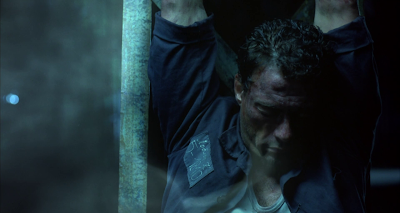 Reading a synopsis of Ringo Lam's final collaboration with Jean-Claude Van Damme you might come away thinking that In Hell is about your standard prison fighting tournament, the muscles from Brussels stomping progressively larger, more crazed inmates for our buzzed-up entertainment. While that isn't a million miles from the truth, this isn't a Cannon film and Ringo Lam isn't a Cannon director. In Hell is a mutant, a squalid straight-to-video thriller that leans far more on Van Damme's sombre acting abilities and fading star persona than his high-kicking gymnastics.

Van Damme plays Kyle LeBlanc, an American serving a life sentence in a Russian prison / meat grinder for executing the man who raped then murdered his wife. LeBlanc may be determined and forthright but he isn't a karate killer, the confrontations he seeks in the early passages of the film aren't about building up an idea of an unbeatable fighter, they're the desperate actions of a broken man who wants to be thrown away. These pointedly unsuccessful scuffles land him in solitary confinement, a sewage outlet that doubles as a cell, giving him the time and space he needs to retreat completely into his thoughts, fantasising a different life, one in which he and his wife are still together.

When the film's gears shift, thrusting Van Damme into the exercise yard cockfights staged for the amusement of the guards, what follows isn't treated as a triumphant plot development. The violence fundamentally alters LeBlanc. His dream life, his soft interior, is abandoned in favour of an obsessive exercise regimen, stoked by the hate radiating from his cellmate, the glowering Inmate 451, played by Lawrence Taylor. Finding his romantic humanity completely incompatible with his current, nightmarish environment, LeBlanc willingly hardens himself, transforming his body and perspective into that of machinery. In combat he's a slobbering monster, built to break. Away, he becomes a sacrificial calf, willing to suffer to unite the working, criminal classes against their tormentors.
Posted by Chris Ready at 16:22:00