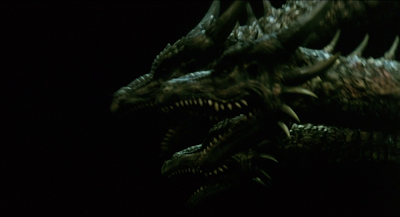 Director Okihiro Yoneda is back to close the curtain on Mothra's Rebirth trilogy, bringing with him the fairy tale framing that distinguished his opening instalment. Despite the film's modest budget, Rebirth of Mothra III aims for the top, drafting The King of Terror himself, Ghidorah, to make trouble for everybody's favourite insect. Arriving from space via meteorite, the three-headed monster sweeps over Japan, gathering up the nation's children and atomising corporate landmarks. The kids are imprisoned in a massive, undulating egg filled with stalagmites that ooze liquids corrosive enough to reduce a school bag to soup. The Golden space dragon apparently prepping himself an enormous, and quite appalling, omelette.

Positioning King Ghidorah as The Enemy of All Children makes for a great match-up with the friendly, neighbourhood Mothra Leo. If nothing else, the gleaming monarch's raw star power helps to eclipse a previous film in which our dusty hero was stuck colliding with a villain that looked like a lacquered, swimming pool flotation device. No matter how many transformations this mutating Mothra has under his belt, King Ghidorah still registers as basically insurmountable. Yoneda's film is canny enough to follow through on this imbalance. The fights in Rebirth III then have a sense of hopelessness to them, especially since Leo doesn't look like he'll be laying any eggs if the worst happens. This Mothra doesn't just airily circle his foe either, blasting away with Koichi Kawakita's laser beams, he gets in close, clawing and biting at Ghidorah's many faces. Even that doesn't work.

Any success Leo enjoys is tied directly into third-party machinations. The Earth's human, insect and even dinosaur inhabitants willing him on in each different epoch. As well as a friendly family who all very obviously love and care for each other - the cuddly, emotionally accessible parents even refer to each other by the titles 'Momma' and 'Papa' - the three Infant Island priestesses are promoted from irritants (for the feature enemy) to full-on plot participants. Megumi Kobayashi's Moll drains her entire life force to power Mothra back through time for a dust up with an adolescent dragon; Aki Hano, consistently the most energetic performer in these films, steers evil pixie Belvera through a change of heart when confronted by the totality of Ghidorah. The black sheep of the family working with, rather than against, her sisters. Again and again Rebirth stresses unity and collaboration in the face of a terrible, singular threat. Mothra is portrayed as not simply the most powerful monster but an avatar for everyone who just wants to live in peace.
Posted by Chris Ready at 21:57:00