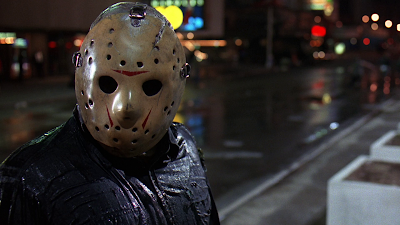 Despite its ungodly length Friday the 13th Part VIII: Jason Takes Manhattan moves like a film on fast-forward. Writer-director Rob Hedden's high concept pitch is to lift Jason out of his backwater stomping ground then set him loose on the Big Apple. The masked killer accomplishes this seemingly impossible feat by stowing away on a passenger ship full of teenagers celebrating after graduating their senior year. Simple really. This pleasure cruise is basically a mini-movie unto itself with Jason teleporting around the various decks, slaughtering kids and Captains alike.

Manhattan's murders are especially cruel. Characters and relationships are barely even established before Jason has waded in, picking people off with whatever weighty lump comes to hand. Instead of the short, sharp shocks of previous entries, Part VIII actually delights in the sheer powerlessness of its victims. There is much more screaming and begging than usual. Jason, typically depicted as a sexless troll, is allowed to luxuriate in the physical domination he represents. His actions are slow and deliberate, mocking even. Its clear he's savouring the moment. So while the killings may be largely bloodless (thanks to the MPAA) they still register as acutely uncomfortable. This abruptness actually works for the film though, who wants to sit through romantic subplots that wouldn't go anywhere anyway?

This curtness plays corrective, Hedden attempting to move Jason away from an ironic audience surrogate and make him loathsome again. The clues are all there. His insatiable appetite for bodily destruction denies viewers the languid, pick 'em off pace they're used to while the anaemic deaths themselves needle the audience with a sense of a pain and terror rather than the usual satisfying splurt. The psychic connection Voorhees shares with Jensen Daggett's aquaphobic Rennie further establishes a weak, tragic core in the masked killer - a quivering child concealed in a shell of oozing, toxic musculature. Is that who you identify with? A violent brat tantruming for attention? Jason Takes Manhattan doesn't just implicate its slathering audience, it attacks them. Punishing fans whose main point of connection with the series is the delight they feel seeing an invincible madman pulverising the popular kids.
Posted by Chris Ready at 21:24:00