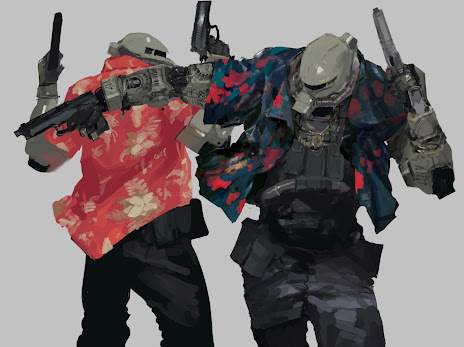 HPSHAWTY - Walk With A Limp

Doctor Strange in the Multiverse of Madness 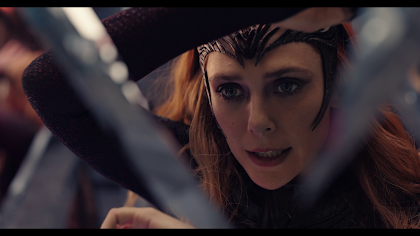 Although this is Sam Raimi's first pass at a Disney era Marvel character, Doctor Strange in the Multiverse of Madness is the director's fourth adaptation of works that can be traced back to writer-illustrator Steve Ditko. As such, it's tempting to examine Multiverse within the context of Raimi's own web crawler trilogy - how then does this Doctor Strange episode measure up to the Tobey Maguire Spider-Man films? While there's less - but not zero - willingness to physically and mentally torture the film's leading man, Multiverse does improve on these previous works in one single instance: it combines the role of the leading lady and the villain into one super-character, subject to the extended attention you'd expect to be apportioned to the former while also acting with the ruthless determination of the latter.
The first Raimi Spider-Man seemed to be positioning Kirsten Dunst's Mary Jane as a co-lead for that franchise, subordinate to Peter Parker's overarching journey but still able to eke out her own little corners of agony. That film's sequels were less inclined to follow that blueprint, discarding her perspective almost entirely in the theatrical version of Spider-Man 2 (an extended home video cut gives her a few underwritten asides) then transforming her into a prize to be haggled over in Spider-Man 3. A pivotal scene in the first Spider-Man has Parker inadvertently hear a screaming match between Mary Jane and a ranting father. He observes something private and embarrassing but doesn't then attempt to use this information against Mary Jane. Instead he commiserates, clumsily, before Mary Jane whisks herself away, smiling through tears.
Although designed - in the screenwriting sense - to allow the audience to see a gentle, non-judgmental side of Parker, how Dunst plays the scene keys us into the idea that Mary Jane has her own separate narrative arc, one distinct from, but complimentary to, Spider-Man's. Both characters are working class children trying to disconnect from their impoverished home environments and make something less mundane out of themselves. They both dream of a broad adulation; a kind of stardom that asks for little of themselves in return. Michael Waldron (the writer of Disney streaming series Loki and the "The Old Man and the Seat" episode of Rick and Morty)'s Multiverse screenplay does something similar with its two older leads. Benedict Cumberbatch's Doctor Strange and Elizabeth Olsen's Scarlet Witch are both creeping deeper into middle-age bereft of personal connection. Strange devoted his life to the pursuit of magic, missing out on a relationship with Rachel McAdams' Christine Palmer, while Wanda suffered through a pastiche of American sitcoms that gifted her a phantom family, then zapped them away from her.
Disney streaming series WandaVision give us a bereaved sorceress who kidnapped an entire town before using them as tranquilised puppets as a way to work through the trauma she experienced battling the world conqueror Thanos. The show, a superhero-flavoured update on The Twilight Zone episode "It's a Good Life", toyed with genuine disquiet before, ultimately, resisting the urge to paint Wanda as an out-and-out monster. This aversion ended up undermining the strangeness of the piece, an effect exacerbated by a series finale that attempted to drum up enthusiasm for a television budgeted beam war. Multiverse demonstrates far less restraint, Scarlet Witch slaughters dozens of mystical innocents and superhero stand-ins. The film even goes as far as summoning up a team of vaguely fascist Avengers from an alternative reality for Wanda to (literally) pull limb from limb. Raimi consistently asserts himself in this cheery cruelty, working against Disney's well-established formula - that demands an irreverent stance on permanence - by burning tossed-off redshirt characters into the audience's memory by giving them deaths so alarming that their passing lingers like radiation.
Posted by Chris Ready at 15:13:00 0 comments 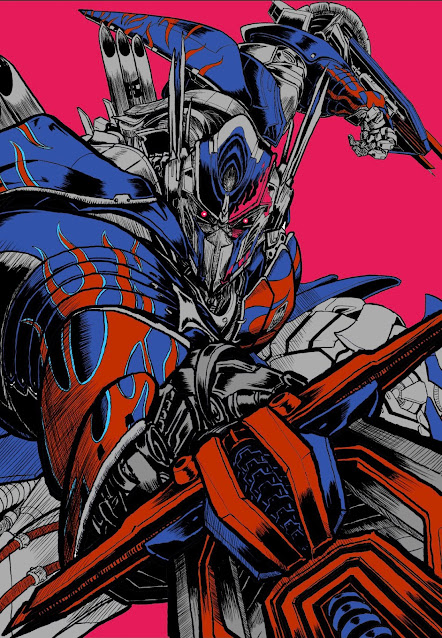 When The Northman begins, Amleth - the Viking Prince who will soon consign his life to the pursuit of vengeance - is still a boy. His father, Ethan Hawke's stout King Aurvandill War-Raven, returns from conflicts abroad with a seeping injury, one that seems likely to expediate the guileless prince's path to the throne. When considering his child War-Raven lasers in on Amleth's innocence; he senses something pure and uncorrupted in this cossetted, wide-eyed adolescent. Traits, incidentally, that this King feels are incompatible with the brutal monarchy that War-Raven has upheld. Despite protestations from Nicole Kidman's Queen, the father and his son partake in a ceremony designed to hasten Amleth's creep into adulthood. It's a shamanic ritual, resided over by Willem Dafoe's court fool, in which the two royals strip naked, bray and fart like animals, then drink mead spiked with a hallucinogenic. This witchery allows the pair to grasp at ethereal, reality-defying, visions that position their family within a massive tree root that extends off into distant futures.
Immediately following this psychedelic service, War-Raven is set upon and killed. Amleth escapes but never recovers from this outrage. His identity and outlook are frozen in the moments that he watched, helpless, as his father was murdered and his mother was carried away as plunder. Amleth therefore never quite shakes off the spell that was cast over him in that smoke-choked hut. The animal aspect that was summoned is never corrected by a return to the patterns and rhythms of a courtly life. The oath he swears during his escape - to avenge his father and free his mother - becomes an all-consuming ideological fulcrum. A desire for correction now burns within Amleth. The emotion has swallowed him whole, feeding the slathering, amoral might that lurks within. It's obvious then that The Northman owes John Milius and Oliver Stone's Conan the Barbarian a massive structural debt. Writer-director Robert Eggers and co-writer Sigurjón Birgir Sigurðsson treat that 1982 sword and sorcery film as a blueprint, battering a Scandinavian legend until it pivots on similar beats. Flourishes and embellishments are applied to Milius' sacred text: so while Conan steals a bastard sword away from a trembling Atlantean mummy, in Amleth's tale the corpse actually rises, joining battle with its graverobber.
The years between Amleth's flight and an opportunity to enact his revenge are a blur of frenzied violence. The prince - now played by a strapping Alexander Skarsgård - is a mercenary working with a clan of Viking berserkers. Pointedly, Amleth is party to, but not directly involved in, a kind of casual atrocity that undermines the conceptual purity of his own personal quest. His band generates enmity on a tremendous scale, tearing children and babies away from their screaming mothers then burning them alive. Skarsgård communicates a sheepishness in these scenes; an understanding that he is a component in a machine that perpetuates the kind of misery that drives his own vendetta. Later when Amleth has lied his way into a position that allows a chance at retribution, real-life circumstances gnaw away at his fantasy. The Wagnerian torment he has given his life over to is repeatedly undermined. First by the diminished circumstances he finds his treacherous uncle in, later by the poison that drips from his own mother's mouth. Eggers and Sigurðsson never let us forget that, in his heart, Amleth is a thwarted child. Jealousy prickles when he sees his mother loving another son and he willingly suffers through months of slavery just to decode a familial affection that he himself has never experienced. The final act of The Northman sees Amleth sinking deeper and deeper into delusion as a response to the devastating truths that assault him. The form of the film twists and turns in sympathy, rejecting muddy historical reality in favour of supernatural reverie.
Posted by Chris Ready at 00:29:00 0 comments

In terms of instantly recognisable video game characters, Street Fighter II's World Warriors take some beating. Each one of the original eight globe-trotters were so perfectly composed that even the lightest remix (Hyper Fighting's colour swaps excepted) borders on pointless. Not that Capcom is happy to rest on their laurels. The company can't help burying their cast under affectations that players then can't wait to reverse, necessitating a trip to the app's online shop to pick up a classic costume. For instance, did Akuma really need a lion's mane in Street Fighter V? Similarly, after hitting on that cracking undead Ryu design in Super Street Fighter IV: Arcade Edition, was V's killing intent variant in desperate need of a pair of neon pink devil horns? So what wilful sabotage have Capcom cooked up for their sixth instalment? Aside from a Ryu that (in fairness) looks genuinely fantastic we have a Guile with the jawline and blonde facial hair of WWE's resident belt hoarder Brock Lesnar. Not awful then, but still not a patch on a Super X-era Daigo Ikeno pin-up.
Posted by Chris Ready at 22:09:00 0 comments

First look at a Final Fight fan project that shrinks Capcom's seminal coin-up down to Mega Drive dimensions. Although there's not much but menus in this clip, Edmo Caldas, Master Linkuei and Mauro Xavier's Final Fight Ultimate already looks about on par with the nearest equivalent adaptation, the 1989 Mega CD release, and conclusively trumps the period SNES cart(s) by allowing players to chose from all three street fighting characters. Although hardly a fair match-up, given the intervening decades of accumulated compiling know-how, it's still fun to see Sega's humble 16-bit system pushed to its limit.
Posted by Chris Ready at 18:46:00 0 comments 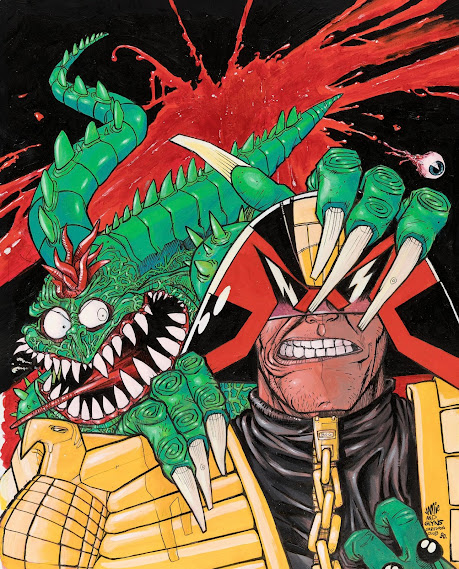